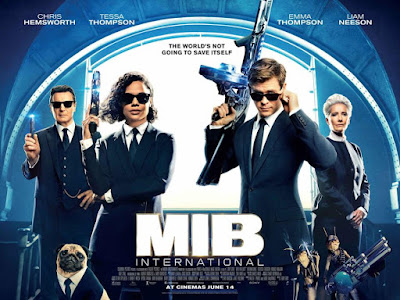 So the good news is this one was fun! Actually my favorite MIB movie outside of the original film, and honestly if you haven't seen any of them then I suggest watching the first, then this one, and pretend like 2 and 3 don't exist.

I went in to Men in Black International expecting a mediocre film made better by the likes of Thor and Valkyrie, and came away pleasantly surprised. It wasn't a great movie by any stretch, but it was more engaging than several other films this summer and I did not feel ripped off afterward. Overall, a lot of fun to be had. Here are some highlights (some spoilers ahead):

Yes, Thor and Valkyrie as Men in Black, a perfect combo for the most part!. Chris Hemsworth plays himself (the best and only way to take in a Hemsworth, I assure you) while Tessa Thompson (of Valkyrie fame from Thor: Ragnarok) plays the new up and coming MIB agent. Their chemistry works well, although this film lacked any meaningful romance or tension....Hemsworth and Thompson both come off like they are testy brother and sister than anything else. It's an odd thing for me to note....I generally am not that interested in seeing romance on the big screen in action films since it can be done so terribly, but every now and then a movie like this comes along where it sort of feels like it would have been fun to see.

Liam Neeson is great in his role as Agent T, director of London operations. SPOILER! He is also obviously the secret villain reveal and this is painfully obvious despite their making no initial effort to tip their hand just because a key failing of this movie is its strict adherence to trope and cliche with the script. When you see him show up it is fairly obvious despite vague attempts to pin the possibility of a traitor on another character that it was Liam all along.

Speaking of villains, the big bad at the end as a great Cthulhuesque monster, and a great special effect. I very much enjoyed the reveal at the end even if it was obvious thanks to the terrifying transformation and the overall plan to drag in the enemy known as The Hive from some other region of space. Also, the finale was mercifully short....no prolonged, needlessly long fight scenes. It was too the point, refreshingly so.

The overall plot of MIB International may have been predictable, but the road trip to the end was great. It felt at times more like a James Bond movie with aliens in it, filled with lush locales and interesting areas to explore, all on earth no less. The locations and filming were great.

In the end, this was a fun movie, well worth my time to watch with the family, although I think you would be happier with discounted ticket prices (I did luckily see it at a matinee price). Solid B+!
Posted by Doctor Futurity at 6:00 AM