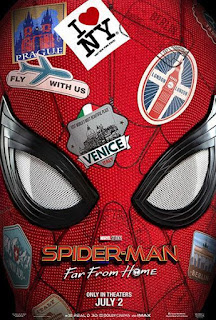 The first thing that Spider-Man Far From Home does is get details of the "snap" and the five year gap which leads to the "blip" out of the way. It's simultaneously the most "comic book" of subplots even as it defies the traditional logic of comic book universes, which is that nothing dramatic like this normally ever happens--and if it does, it's to an alternate reality and the main continuity stays the same, or maybe it stays that way for a few years and then the stories quietly resume the status quo when the idea has been exhausted and the novelty has worn off.

This, however, is the relatively uncharted waters of a cinematic universe derived from the comics,  so we instead get to see what happens in a post-event version of the Marvel universe. Spider-Man Far From Home is uniquely suited to this task as it conveniently seems to have insured all of Peter Parker's core gang blipped out with him, and then addresses the general social ramifications of a universe which lost and then regained half of the population of sentients over a five year period. Interesting stuff, and weird, but I admire that they were willing and able to engage with their fictional universe at such a level. It doesn't necessarily hold up under scrutiny....but it absolutely holds up under the rules of comic book logic as applied to the four-color realm of human psychology and norms in a universe where cosmic threats happen with sufficient regularity that it becomes mundane.

Indeed, much of the movie focuses on exactly that: what happens when dire threats are potentially all mundane now, and existential threats must be had to get noticed, especially if you are --say-- a wannabe hero like Mysterio? The plot revolves around this notion and does a great job exploring the concept (again, within the highly defined scope of the MCU) while also telling the story of a teenager with super powers who would really like to continue life as a teenager if only the super hero business didn't keep dragging him back to it.

Overall I loved this movie, it was a really well paced, carefully structured movie with a medley of engaging and likeable characters, a great twist that even I as an old comic fan thought was suitably interesting (and yes, this relates to Mysterio's "reveal.") The best parts related to Peter Parker's long running interest in Mary Jane Watson, and the interplay of that process with their friends. Overall a great, fun, relaxing summer movie and maybe the only one I could really advise people "don't miss." Also my favorite Spider-Man movie to date. A+++!

Posted by Doctor Futurity at 12:10 PM

Email ThisBlogThis!Share to TwitterShare to FacebookShare to Pinterest
Labels: spider-man far from home