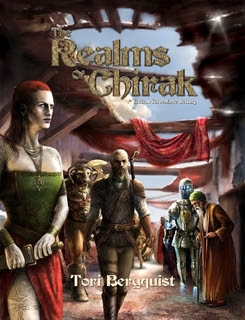 As some of you know, I have an ongoing world (Realms of Chirak) which I have tried to produce a working final published document for for a few years now. The timeline for Chirak as a publishable D&D setting has kind of looked like this:

1992-1999: The dark ages, in which I started with a basic 20 or so page document that was my springboard for campaigns in Runequest III and AD&D 2nd edition during the nineties.

2000-2008ish: during this period I did more work solidifying and updating a massive accumulation of notes and bits from prior campaigns into two working documents. The first was a 50 page document that was my GM's gazetteer which rapidly grew to about 150 pages, and the other was a 32 page player's guidebook. I kept a working document for both D&D 3rd edition and whatever version of Runequest was extant at the moment. These saw publication as chapbooks but were only made available to players in my groups.

2008 -2011: One major problem with 3rd edition D&D for me was that it was nigh impossible to do a custom homebrew setting in the system without breaking or mashing some rules. All to often what worked just fine for my own game table would be considered blashphemy in the D&D 3rd edition community, and as a result I never felt comfortable completing a working document for publication. 4th edition D&D changed all of that, with a very codified ruleset which made mechanical implementation pretty easy. I managed to upload a finalized document for sale, and a version on lulu for print in this time period. To date it remains the "print" version that is pubically available, outside of what I have released on the bog.

2011-present: all of my ongoing work, ideas, future and current campaigns and so forth have made their way in some form on to the blog. By not monetizing the blog and keeping it free and "you get what you pay for" this freed me up to offer my take on content without worrying too much about what people would think of it for their own needs.

2013-2019: My Pathfinder 1.0 document is a shambling mess of material and notes but I never came close to a definitive rules doc with Pathfinder like I did with D&D 3rd, probably because Pathfinder didn't really need it. However with D&D 5th edition I found the task of editing the book for 5E mechanics to be fine (but boring; 5e stablocks: "easy but boring")....but the real task is that the sum total of a unified document reflecting the campaign over 27 odd years of weekly gaming totalling what might well be somewhere around what I estimate to be at least 6,000 to 8,000 actual game hours spent in Chirak, with thousands of pages of loose documents and files to draw from, to be a horrifying challenge.

So....here I am now, with a rough draft of a final 5E update that is close to 500 pages in the edit and I'm still far from done. Where to go from here?

Well, recently I decided to start breaking it down in to discreet pieces to see if that let me focus more specifically on sections of the setting without getting too bogged down. So far this has worked well, and after I complete five or six "pieces" I think I'll try releasing them in smaller setting books which then unite over a larger scope. Eventually I will have enough that I can then turn them into print-ready compendiums without much effort....but at least I can get them in to some working format!

The trick now is what systems (if any) to focus on. 5E is easy enough, but I have been adding Cypher System mechanics to literally everything these days (I have a complete working document of the Sabiri Lands statted out in Cypher System, for example) and it's hard not to, given how easy and liberating Cypher System is for GMs. Also, there's this little thing about Pathfinder 2.0 coming out soon....but I suspect that if I were to try including that, I might run into some of my old problems. We'll see.

What I could do is release different versions of each piece for specific systems. A version for 5E and a version for Cypher System are both easy enough. If Pathfinder 2.0 is a forgiving system to write and design for, then I can add it in. Doing these doc piecemeal may indeed make such tasks less onerous.

In the meantime, my current plan is as follows: before close of year, I'd like to release these short books, each ranging from 30-50 pages for Chirak:
Espanea and the Kaldinian Isles
The Sabiri Lands
Mercurios
A Guidebook to the Cults and Religions of Chirak
Xoxtocharit
Kasdalan

...With more planned. Some regions haven't been developed enough for a 30-50 page treatment (I've never had more than a couple pages on Adenach, for example), so some of these books could incorporate neighboring smaller kingdoms/regions as well.

Another advantage to these focused location books is that they can string into the intended campaign, but could also be used "as is" by GMs looking for a specific location, or could be dropped in to someone's own setting to fill a niche or corner. My plan is to make sure that everything you need to fill out the detail on the local setting is provided in each book.

I also need to think about the art direction. Plenty of decent stock art out there to be found and paid for these days, but many other publishers are also using that stock art. I have a lot more income to mess with now than I did 10 years ago, so a little money spent on good art for a vanity project might be worth it. I could try Kickstarting, but not unless I do it the Sine Nomine way (also known as "The Smart Way") so I'll need to go read over the excellent publishing doc he provides, as it is well worth any small publisher's read through before tackling any project, let alone a Kickstarter.