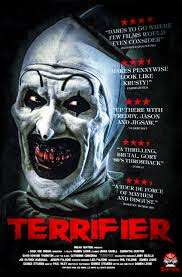 The film Terrifier has been sitting around in my Netflix queue for a while after reading a recommendation a while back that this was an indie slasher flick worth catching. The Terrifier focuses, apparently, on a malevolent clown who previously appeared in a series called All Hallows' Eve which I had not as of yet caught, and luckily did not need to see for this film to make sense.

Right off the bat: if you're not in to gory, splatterpunk style slasher flicks, then just skip this movie. Got it? Okay, for the rest of you....

This is a brilliant and horribly awesome B movie slasher flick! If not for others talking about it I would never have known to look for this one, and it was well worth the watch. The lead villain (the Terrifier, I guess?) is a sadistic serial killer who dresses up in the gruesomest black and white clown garb imaginable, easily a contender for freakiest clown outside of maybe Pennywise in the It remake (and even then only when Pennywise starts transforming).

FYI some Spoilers ahead!

The story is basic and to the point: two gals out for an evening on Halloween are effectively stalked by a madman dressed as a clown, and there's a lot of collateral damage along the way. This film is absolutely about the tale of the Terrifier, and make no assumptions that there's a protagonist for us to root for as the murder clown disembowels and slaughters those who get in his way; the story is not about who survives, but what's left of any survivors at the end....it harkens to the splatterpunk genre with great efficiency as a result.

One of the better bits about this movie is that the guy playing as the Terrifier sticks to a wordless, almost soundless approach to the villain, with only occasional grunts and just once a scream when taking injury. For all his horrifying bits, the Terrifier is (for most of the movie) a mortal human, just so disturbingly freaky that he unnerves his victims into desperation. His facial emotes with the mask are memorable, though you may wish they weren't (unless your a jaded old horror fan who can't be scared by anything anymore, like me). This adds an element of uncertainty to the film, as it is always possible that a victim could finally gain the upper hand on him.

Speaking of splatterpunk, the gore in this movie is over the top, and sufficiently gruesome that I had to watch this with kid in bed because it was just Too Much (and this is a kid who is obsessed with Friday the 13th so much he can tell me the whole tale of Jason Vorhees). Unlike the guy with a hockey mask however, which is mostly a film series with "conventional slasher" gore, Terrifier is definitely much closer to the more visceral and disturbing splatterpunk style of the genre.

The Terrifier has a few "odd moments" which I still haven't quite reconciled. There's a moment when it is unclear if he's wearing a victim's skin and prancing about, or if he's merely placed the mask on her corpse and she's under his control somehow. It's a freaky effect and I can see why they went with it, but there's never any clear resolution as to what was going on in this sequence. Toward the end of the film, in true form to the tradition of serial killer films he's brought back as a terrifying, unkillable revenant specifically so we can appreciate that there will be an inevitable sequel.

Anyway, it was a good, terrifying, dismemberment-filled romp, and I thoroughly enjoyed it. The movie is currently playing on Netflix and probably other streaming services. A+ for horror and splatterpunk fans! Non-horror fans and the squeamish should probably avoid.