Alternity RPG - Where are the Forums? Why is Sasquatch Studios so bad at website updates and support? 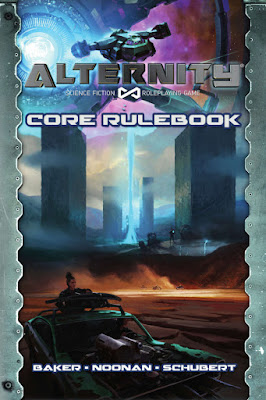 While diving in to my recent excursions into the various D20 sci fi games out there (Starfinder, Advent Horizon) I noticed that a game I had enjoyed reading but shelved due to the fact that it needed more content to be useful suddenly had more content. Specifically the Alternity RPG from Sasquatch Studios, the spiritual successor to the late great Alternity of 20 years back.

So if you haven't seen them, Alternity has some products in PDF and two in print here, including the Xenologist's Guide and the Protostar Mission Guide. The core rulebook can be found in print with a bit of sleuthing here. I think I've blogged about it before (maybe not?) but it's a decent system with a good core mechanic, but it lacks some of the depth you can get in Traveller and clearly needed more content out (and soon) to sustain interest. That hasn't really happened since 2017 until now.

I was rooting around looking for some evidence of fan support on forums, and noticed that Sasquatch Studios doesn't seem to be all that good at keeping up on their web presence. They have a webstore, but it's hard to find and not even close to the first search link when looking for the game. The PDF products aren't easy to find unless you know to look at drivethrurpg.com. There's no forum or fan place to post right now.

I did recall that the game was Kickstarted, so I went over there to see what activity was on the web page and noticed that it, like so many other Kickstarters, appears to have been behind on its promises or not fulfilling to the expectations of backers. Some of the comments on the Kickstarter are nice, but some are mean-spirited in that special way only backers can get (and rightfully so, sometimes; when you sink money into a project with promises on the content delivery you expect them to come through).

Unfortunately, I suspect that the side effect of a mixed bag when it comes to the core fans who backed a project being vocal in their displeasure at the KS's follow-through is that it means there's probably less incentive for the developers of the game to provide forum support which leads inevitably to more places for people to gripe and bring it all down. Ironic, given that the game is at least fulfilling its goals, albeit slowly from the looks of it.

On the other hand, Sasquatch Studios release Primeval Thule a while back and didn't provide support for it online either (no forum or regularly updated website). But that was also a Kickstarted project and I also recall some fans being unhappy with at least the 13th Age iteration of the game. I personally really liked the 5th edition version of Primeval Thule. Soooo....hard to say if the problem is that Kickstarted games with release issues lead to fewer venues for forum support, or Sasquatch Studios just isn't good at (or has the time for) making sure they have website support for their games. Either way it's a shame.....I like Alternity RPG and would love to see more content and discussion about it online.

Another thought has crossed my mind, too: could this decent RPG be suffering right now because it took the popular name of a beloved SF rpg that inevitably will be held up against it in scrutiny? There's no disputing that while the new Alternity is a good game with a design that I find better than the other game of the same name, it definitely lacks the graphic style and design of the original. But if all the attention surrounding the game came from the title, then it's inevitable that it will be judged not by what it is, but by what it claims to succeed.

If I'm wrong about this and there is forum support somewhere, let me know! The closest I could find was at the traditional original Alternity website which has a corner for "Altenity 2.0" that appears to be quite out of date.

Either way, I will try to write more on this one soon. Alternity RPG 2.0 is a nice game system, and accomplishes more with what I am looking for in an SF RPG right now than the other systems I was messing with, so I may finally try to play it soon.
Posted by Doctor Futurity at 9:59 AM