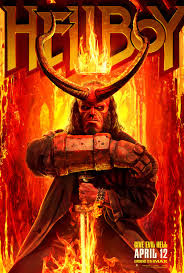 If you blinked then you probably missed it, and that's probably a good thing because it will be on Netflix soon enough to suck up precious moments of your life.

Hellboy for 2019 was a magnum opus for the series, an intent to kick off a new film "expanded universe" while aiming for a stronger depiction of the creative core of the Mike Mignola created character Hellboy and his comic universe. It got a lot of the visuals right, and to be fair the film had some great moments....but it managed to fall flat in so many other ways.

In terms of genre, Hellboy wasn't so much a "superhero film" as it was in the special genre of "campy, somehow not self-conscious action franchises that often have Milla Jovovich in them." That includes the Resident Evil movies for those keeping track...except not as unintentionally funny, alas. Hellboy actually does star Milla as the chief villain, and her performance in this film is pretty good, actually. There is a decent attempt at meaningful performances from most other actors in the film including the new Hellboy, who does the best he can behind the prosthetic makeup he has to wear to convey the gruff and disgruntled Hellboy almost as well as Ron Perlman did.

Unfortunately the story they are trapped in is convoluted, sometimes pointless, often lacks any sense of threat, tries too hard to go over the top when it should have gone for a more subtle approach (living in the shadow of prior Guillermo del Toro works has that effect), and ultimately feels like not insignificant portions of this movie were specifically filmed to fit the trailer they imagined would bring the audiences in droves.

On opening day my family saw and enjoyed it, but the theater was mostly empty. This film was at best pushing a C rating due to such an obscure property with such a failed effort at a script and far too many nonsensical set pieces mixed in with far too many characters we didn't learn to care about. This movie was doomed from the get go and I don't think anyone saw this until it was too late. C-
Posted by Doctor Futurity at 6:00 AM

Email ThisBlogThis!Share to TwitterShare to FacebookShare to Pinterest
Labels: hellboy 2019