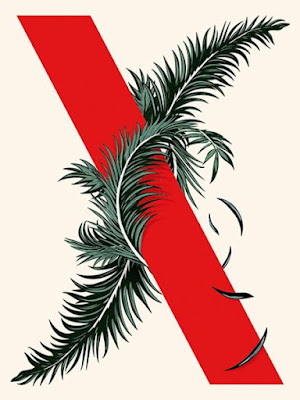 At the time that the movie Annihilation came out I had not yet started the first book in Jeff Vandermeer's Southern Reach Trilogy, and to be honest I didn't actually pick all three up and finish them over a couple weeks until recently when I had my mass conversion back to basic print over ebook format. Annihilation, Authority and Acceptance (the three acts of the trilogy) were my first reads getting back in to Plain Old Print fiction and a very good choice for this exercise.

The first thing to know about this trilogy is that it is slow, and while it arguably can be labelled science fiction or possibly even fantasy, in truth it's more of a genre bending transitional form of fiction, stirring the pot of surrealism, with a healthy does of the unreliable narrator to help obscure any sense of objectivity to the process. The first book in the trilogy after which the movie was very loosely based is the shortest, and also takes the greatest advantage of the concept of the unreliable narrator through the perspective of the Biologist (played by Natalie Portman in the movie). The second book moves to a third person format, but still tells the tale of a certain perspective (the man self-identified as Control) and with it comes his limits of understanding and perspective. The third book breaks form somewhat by moving between multiple perspectives, all of them equally flawed in their ability to process and understand what is happening around --and to-- them.

The Movie vs. The Book
It has been said that the movie version of the first book is something better watched without having read the novel. I agree, to an extent, but consider this: when you are familiar with the novel, it both  shines a light on the similarities and the differences between the book and the film, but in a weird way the two compliment each other. By the time you've read the whole trilogy this will make more sense; the universe of the Southern Reach is one in which countless obscure expeditions have been made into a region called "Area X" and part of the process of many of these expeditions has been to remove contextual personalizing traits from the volunteers, as too much personal identity is considered something risky, something that can be exploited. The movie, from a certain point of view, could have been about a very similar expedition to the one actually in the book (the key exception being the role of the Psychologist, who is also the director of the Southern Reach, and the only such director to have attempted to enter Area X). So....if you just take the movie as it's own thing, complimentary but not necessarily intended to be consistent with the book, you will enjoy it on its own merits.

Is This Mythos Inspired?
I've read comparisons of the Southern Reach Trilogy to being Lovecraftian or Mythos inspired. From a certain point of view this interpretation is understandable, as the core conceit of the trilogy is an unknowable, unnameable force or entity (the Anomaly) that may or may not even be "alive" in any sense we comprehend affecting the region (Area X), and the books focus on the experiences of those trying to understand what is happening. Events in the trilogy at times are strongly reminiscent of the concept of the mythos....horrors and nightmares that are purely such because of how capricious and beyond caring or even seeing humanity they are. However by the end of the trilogy it is clear that the only true similarity or point of comparison is how beyond human comprehension it is, but not because we are like bacteria on the surface of an uncaring universe in comparison to the Anomaly as you might imagine we are to the monsters of the mythos, but rather because the point of the mystery in the trilogy is that there are things that humans can never truly comprehend...or be comprehended by. Some of the core conceit in trilogy is, to me, akin to a human being trying to relate to what it means to exist in the universe as a geode; and conversely, what happens if that geode were to wonder what it means to exist as a human. The point of interaction on such a stage would be so unfathomably alien and difficult for either side to grasp that any effort of necessity must create a sense of terror and misunderstanding.

So...it's got some similar DNA to mythos horror and Lovecraft, but the context is distinctly different.

But is this Series Good?
Absolutely, and well worth a read for anyone who is in to: science fiction, mysteries, surrealism, tales from unreliable narrators, strange mysteries and psychological horror mixed with a bit of body horror, with a very slow burn. By book three (Acceptance) I felt like there was maybe a bit too much push to provide some semblance of closure for the characters and reader, enough so that when we finally did get a reveal on the nature of the mysterious Anomaly and Area X that it felt at least a bit to me like a cop out....but, admittedly, one which was well within the limited narrative allowance, when you recall that all the details we know are filtered through the perception of the characters, so the reveal itself is still tainted by a potentially unreliable perspective.

The ride to get to the third novel is a weird, wild ride despite being such a slow burn. The first book (Annihilation) is the tightest and most interesting since it focuses on an expedition in to the wilds of Area X and is the most exotic of the three novels by comparison.

Book two (Authority) tries to read more like an espionage or spy novel to some extent, and while it hints at the depths of chicanery going on behind the scenes with the organization tasked with containing and researching Area X (The eponymous Southern Reach) it is as much a deep dive into the personality of "Control" who is a deeply scarred product of the world his parents forced him in to as the actual operations and people of the Southern Reach. Much of the suspense and horror in the second novel is an exceedingly slow burn as well, riveting to me but it might be too slow for some readers.

By book three (Acceptance) the story winds around to multiple narratives from different time periods, focusing on the Psychologist from the first book, the gentleman we learn is Saul the lightkeeper from before Area X appeared, and the actions of Control, the Psychologist now self-identified as Ghost Bird and the assistant directior of the Southern Reach (Grace). Together their narrative wind down to something approximating an end, at least for each character, even if the ultimate reveal is purely an interpretation by one particular character which also feels (to me, at least) a bit like the author realized that if he didn't offer up some bone then it might not feel like a proper resolution. I won't give any of it away....if you read through books one and two, you owe it to yourself to finish book three and decide for yourself how you feel about the end.

Overall this is a brilliant trilogy, roughly self-contained, demonstrating to me that Jeff Vendermeer is a consistently good author (I have enjoyed every book of his I've read so far). If a deep, careful slow burn of a novel with an obscure, almost surrealistic apocalyptic mystery at its heart sounds like your cup of tea than I suggest you read this as soon as possible.

Posted by Doctor Futurity at 11:25 AM