Getting Seriously Excited for Pathfinder 2.0 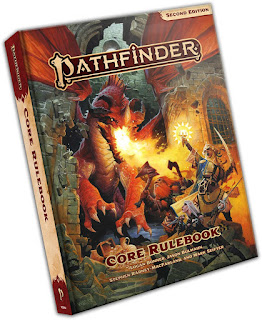 As the teaser articles roll out I find myself increasingly excited for Pathfinder 2.0. I've certainly enjoyed my time with D&D 5E, but I continue to admit that there has always been something really special about the years I delved deep into Pathfinder (and 3rd edition before it), warts and all. The idea of a streamlined, retooled version which (it seems) dropped the weird stuff from the playtest I didn't like has me really excited.

We shall see, though....I have a good feeling about this one, don't know why, I just like the cut of Paizo's gib, y'know?

The product will probably only fail for me if it does more than one of the following:

1. Integrate too deeply into the default world of Golarion making it hard to use the game with my own settings;
2. Did not actually get rid of annoying and cumbersome rules seen in the playtest (such as the essence mechanics for magic items);
3. accidentally introduces too many new rules in the name of streamlining that are counter-intuitive for verisimilitude-focused play (the "4Eification" of PF2.0 if you will; a valid concern since the devs have occasionally suggested that 4E had its influences here).

I don't want to be disappointed though....I really want a viable, interesting, intuitive but more flexible and detailed game system that provides me with a permanent alternative to D&D 5E. Again....I am not denigrating D&D 5E, I am just saying that I want something that innovates in this space and moves forward in new and fun ways for me as a jaded veteran gamer. I'm a "old gamer who wants to see interesting new ways and mechanics to play in the D&D space," essentially...and I'm betting my chips on Pathfinder 2.0 doing this.
Posted by Doctor Futurity at 11:27 AM