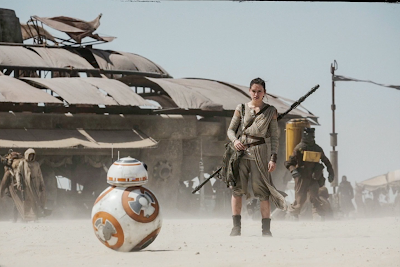 ...actually the only spoilers I'll discuss are the ones which were floating about online and ALL turned out to be entirely incorrect! Kudos to Abrams for managing to keep this one so tight.

Short version: amazingly interesting movie, and a great new direction for Star Wars that both resolved a fun story in one episode and left many looming cliffhangers for the next.

It's really hard to talk about this movie without spoiling it. Hmmm. J.J. Abrams didn't use as much lens flare as he normally does (good). There was still some shaky-cam action in the film, but not as bad as in some other movies he's done (so mixed). The CGI was great but the actual live FX were even better, and the movie benefited greatly from Abrams' choice to lean heavily on live props.

This may sound hard to believe but the movie had what at first blush appear to be some odd science gaffs equivalent to the Star Trek films in scope.,...as if J.J. Abrams has no sense of scale at all. But I could be wrong...I need to watch it again and read the book to see if in fact there was something I missed. Without giving anything away I'll just describe it as a series of oddities that left me wondering what the galactic scale of everything really was....this is nothing we haven't wondered about in prior Star Wars films, though, so business as usual.

Other than that.....be ready for some surprises if you can avoid spoilers! There are quite a few in this movie.

Best Part: far too many to count, and relaying any would be spoiling it. Maybe this is good enough: the film does a fantastic job of setting up our new, young heroes. Finn, Rei and BB-8 are worthy additions to the Star Wars universe. Kylo Renn is interesting and does the evil villain thing while being decidedly different....yet familiar.

Worst Part: this is a tiny sort of spoiler (very vague) so you are warned! Short version: what the heck was up with Captain Phasma?????? You'll see what I mean.

Otherwise: Big A+++ well worth seeing and a worthy Star Wars film.

Posted by Doctor Futurity at 2:06 AM