Chirak: Traveling through the Pellucid Kingdoms 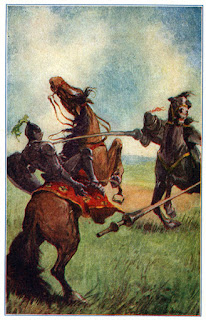 Traveling through the Pellucid Kingdoms

A visitor would likely begin his journey in the port city of Eddernine, ostensible modern capitol of Mercurios.  Ruled by Callosus “Iron” Dukas (ferro re Callosus Dukas), the Iron King of Mercurios, inheritor of the Pellucid lands, Eddernine has been Capitol of the realm for two and a half centuries. The Dukas family has maintained control ever since it successfully conquered the Mercurian lands and united them two hundred and fifty years ago. Iron Dukas’ father was responsible for driving out the menace of the Nithiadians in their quest to expand beyond the Tedroy province. Iron himself has managed the delicate trade alliance Mercurios now has with the Nithiadians, and continues to maintain a strong alliance with Espanea.

The Iron King of Eddernine

The Dukas family has a secret history, which says that when the last true blood ruler of Grand Mercurios (Shyvoltz XI) fell to the blade of the first Iron Dukas, he cursed them. The curse starts with a growing madness madness, and gradually transmogrifies into a form of corrupting lycanthropy in which the man becomes dire bear. After death the Dukas descendent changes again into a horrible undead monstrosity. The first Iron Dukas, Madragor, was interred in a great Tower of Rust in the Dreamwood. After that, other children of clan Dukas were given over to a secret order when they displayed the curse. Only one son in a generation of the Dukas line will manifest the curse, and it is never known which son. To compensate, the Dukas family has always been prolific. Callosus (the fifth) currently has four sisters and five brothers, for example.

The Old Gray Wren is an upscale tavern near the tidal flats which caters to the foreign merchant crowd and the wealthy local businessmen and nobles. It is a two story affair with a pavilion overlooking the cliffs which jut out over the flats. Less than a quarter mile away is the docks and the shipping district.

South of Eddernine about twelve miles is the Lighthouse Keep. Held by Count Arnos Vaskar, the old sea dog noble was once a great lord in the navy, but with age and time, he has retired to his coastal properties. The keep holds one of the many lighthouses that serve to warn incoming ships of the Pellucid Gulf against the ship-shattering cliffs. Vaskar is an honest man who hates the Nithiadians and despises the delicate peace kept with them. He lost two sons in sea skirmishes against the Nithidians. He has a daughter who pursues the military way in conflict in the Scalewood, as well.

The ruler of Manarak is Highlord Arturos Normanio. He is a friend to the Tower of Kaledon, a close ally to Iron Dukas, and a strong protector of his river lands. His wife is Lady Alithia Dukas, oldest sister to Iron Dukas. He has two sons and a daughter.

Inside Manarak are some particular places of interest. The Fabled Tower of Kaledon draws practitioners of magic from across the world. It is the first of the great towers, and it is said it rivals the Masirian Tower in size and splendor, though its look is decidedly antique. The Lord of the Tower and current Chancellor presiding of the Order of the Tower is Darnao Karvos. Darnao is a stern and diligent man who believes in the preservation of lost magical arts and the idealism of Kaledon, the tower’s ancient founder. Said to be an ancient archmage of Mythric descent, Kaledon aspired to insure that mankind never forgot that magic was a tool to serve and teach. So it remains at the Tower.

The Monastery of Laddaskar in Manarak is of the Order of the Frail Samaritan (Ordine de il fragile Samaratino), founded on the grave site of an ancient half-elf man named Samaritano Maritenze. Martienze devoted his life to teaching the lost children of Manarak the ways of survival, farming, and fishing. The story says that when the marauders of the south broke through the gates of the old Pellucid cities, Manarak was razed to the ground, and nothing was left to stand. All men and women were killed or taken away, but the barbarian general who did this instructed that the children and frail would remain. The mysterious Samaritan Maritenze was allowed to live, because he was considered as feeble as an infant.

With the aid of the Samaritano, Manarak lived on in its children, and years later, when new occupiers arrived to claim the land, they were amazed to discover that the children had lived on to the recreate the city anew. When the Samaritan died, they founded the monastery in his honor.

The monastery is kept by the high father, Padre Pyrnaen. He is a wise and dedicated monk of the order, and fulfills Laddaskar’s benevolence in all ways. The Keeper of the Peace is Vusor, a man who honors the dead and seeks to save the damned. Vusor is required to be in attendance at all high courts held in Manarak. Finally, the unusual and unique Padre Kryvysk, the exiled Hashikarystyr noble who as a young lizard-child found refuge with the monastery, can often be found here when not wandering.

A popular riverside spot along the docks is the Riverside Tavern. Owned and operated by Gumicha, a man who once warred for Mercurios against the Dragos during the trade wars, This is the prime spot of rest and relaxation for travelers, adventurers, and river men alike.

The northlands from Manarak are part of the North County, Kesrick County. There, Lord Aesrick Krenshaw rules obediently. He is an old questing Paladin and Kasdalani expatriate dedicated to Laddaskar, one of the rare soldiers to take up the priesthood and sword in hand to defend the innocent and protect the land for duty and deity. He has a son, Dale, who is 16 and learning affairs of state. His wife, Villaris, is the primary keeper of the household and local affairs when her husband quests. His master-at-arms is Goris, a rough soldier who is descended from southern blood. He took on a squire named Aden while serving Mardieux Mardieux, whose estate lies ten miles south of Manarak.

The Capitol of the Old Empire, Grand Mercurios was at one time the heart of Pellucid, a bastion of great power. It never recovered from the sacking and occupation by Kasdalan, which is when the empire is generally regarded as having gone in to decline, but the old architecture remains intact, and is quite marvelous. Some believe that Lady Arvilia Poe, when she occupied the city, took a fancy to its architecture and so preserved it. She has visited the city on several occasions over the last two and a half centuries, always as a visitor. Her image rests with a dozen Pellucid emperors of old in the Grand Hall of the old palace, placed there during her occupation but kept as a reminder of what the city, and empire, survived.

Though Grande Mercurios is regarded as a bastion of philosophical and religious thought, it is largely absent of wizards and mages, or at least the organized branches thereof. It is a little known fact that the local region contains some unique properties, which are not exactly well understood: the region is a center of low magic, where the flow of magical energy has waned long ago. One side effect of this weak flow of magic is that spells are more difficult to cast; any spell caster attempting magic in the city must make a check on his appropriate stat (Intelligence, Wisdom or Charisa) at a DC of 10+the desired spell level for the casting to even succeed. Even stranger is that no local children are born with magical talent; it seems that the skill of magic is dependent on the strength of the magical ley lines in a region, and Grande Mercurios rests in a dead zone.

Because of this element of low magic, most who seek curatives or magical means of assistance cross il Lago de Brenner (the Lake of Brenner) to Cradle or Sorvask, where the phenomenon is nonexistent. Cradle, in turn, has become the seat of magical influence in the area as a result.

Still, despite the weak element of magic in Grande Mercurios it has become the center of religion and philosophy, and the Temple of Knowledge (Tempio de Conoscenza), now administered by the Preservationists, resides at the heart of the city beside the famous Old Palace (Vecchio Palazzo) where Governor Artoram Ristro resides. There is a great row of temples dedicated to almost every dead god, demiurge, avatar and spirit which has been heard of in Mercurios, and the Grande Tempio de Laddaskar resides over them all at the end, a vast cathedral of impressive design, managed by the High Priest Arisinze (sommo sacerdote).

Across il Lago de Brenner lies the smaller but more deeply political and magical city of Cradle (Culla), a different sort of bastion of thought, one in which politicians and sorcerers hold sway. Cradle has a Tower of the Order of Kaledon, founded by the elder mage Prialn, whose true origins are unknown, though he is believed by some to have been born in Cradle close to a century ago. He does not look a day over fifty, and his current wife is the young Espanean contessa Emiriana.  Prialn is not the ruler of the city…..but many think of him as its most influential citizen.

The governor, Hespero Pachadore, is a large man who actively invites the politians, the “senators” of the land and the governors of the cities of Mercurios to attend regular summits in his city. Cradle has become a safe zone for many to discuss delicate political matters, and a retreat for those who wish an escape from their home city due to trouble. It has also served as a neutral meeting point on three occasions for the king himself to meet with the powers of Correnstal, Varkal and Dragos to settle on matters of peace and war.

Outside of its role as neutral center for politicians and mages, Cradle is also the principle bastion of defense against the Kraggit Orcs to the south. A standing army is maintained at Castello Bastione just south of the main city, where a permanent standing army serves as a deterrent against orcish raiders and incursions into Mercurian territory. The forces of Castello Bastione, under direction of Esercito Generale Artiom Musallio, are also privately a deterrent against the Dragosians to the east.
Posted by Doctor Futurity at 6:00 AM