Chirak: The Exodus of the Lich King

Quick cure for the politics of game publishing? New Chirak stuff! My notes from a D&D 5E campaign last year.... 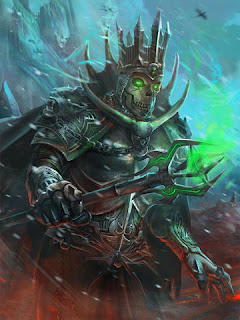 The Exodus of the Lich King

Premise: Lord Malenkin, self-asserted Lich King of Chirak, has departed from his centuries-long dwelling in the Dryssyrian Mountians. In a matter of weeks, his army of undead was gone, with evidence of a midnight forced march across southern Mercurios, leading to the sacking and pillaging Kunin, Dorland and Arelin before disappearing along the coast where some believe the entire army marched into the sea, or boarded haunted ships.

Lord Antares Nystor  (cousin to Cyria Nystor)of Varkal in the north has been visiting Cradle recently, interested in exploring the dominion that Lord Malenkin appears to have vacated. He has called upon the resources of the Tower of Kaledon in the city, and the goodwill of Lord Prialn, to get this job done.

Meanwhile, there are six forces at play in the region that can cause trouble:

The Orc Queen Getana – a sorceress and priestess of Shaligon, Getana has kept her power by bartering for the protection and aid of the Lich King. She sees him as abandoning her, and now she struggles to shore up her forces where they lack, even as the orcish chieftains begin to cast about for a way to make themselves rulers of the Kraggit. In the interim, she has mounted an expedition to Malenkin’s tower, to seize control of it for herself. 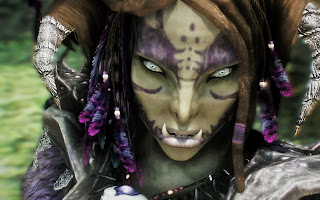 Warlord Moghar – the most active orc warlord, Moghar is seeing this as his opportunity to finally destroy Getana. His wife, Amibdial, is the one spurring him on, to grab power over the Kraggit and to expand territorial control into the territory of Malenkin. He has the Fulmoth Ogre tribe at his beck and call, and the gorloni minotaur mercenary Shadoshan at his service.

Xutolan – the archmage of Tedron in Nubiria, Xutolan has traveled from the Old City of Lobros to claim the legacy of Malenkin for his own. This is not without precedent….for it turns out that Xutolan, who spent much of his youth apprenticing to Malenkin, was informed of the Lich King’s planned departure to Isla Esrosania in Espania some months ago. Scheming to uncover the secrets Malenkin would leave behind, Xutolan convinced Lobros’s priest-king Radamantos to support his planned expedition with warriors and mages. His goal: seize the secrets of the tower in the name of Tedron. His secret goal: find the source of Necrite, a unique magical ore created by the strong tether to the Negative Energy Plane somewhere beneath Malenkin’s Tower….

Anaxon – this young green dragon wishes to live in the region and make all who dwell locally bow before its might. Taking Malenkin’s tower his own would just be a feather in Anaxon’s cap.

Chardalys – the Dragosian nobleman Chardalys is keen to learn the secrets of Malenkin for himself. He has hired a dozen of the roughest and most infamous mercenaries in the Pellucid lands to work for him, and he is playing for keeps.

Synnidath - Aside from the above five, the Xernethians have been probing the region, realizing that Malenkin’s disappearance frees the land from two centuries of undead hordes but also destabilizes the region between the elves and the orcs. The ranger Synnidath is current exploring the area with his modest band of elven warriors.

The Necrite Mines – one of the reasons Malenkin chose this location two centuries ago was its positioning over a natural rift cluster, which included rifts to the Negative Energy Plane and the Shadow Plane. These mines operated continuously for two centuries, providing the rich magical ore called necrite, a substance of chilling value in alchemy and necromancy. With it, Malenkin forged a large undead army and tethered this region to the rifts, creating a lingering, permanent shadowland around his own tower.

In the end, the rifts remain and will continue to influence the land, but the mines ran dry. Eventually necrite will form gain, but it will take centuries for the substance to reappear. In the interim, the mere presence of the rift to the Negative Energy Plane insures that very few creatures which die in the region of the tower stay dead for long….almost any corpse within ten miles of the tower will rise again as a zombie within 1D8 days.

Castello Mordrovario – this ruined castle is almost unknown to all, but rested a mere ten miles from Malenkin’s Tower and was the point of power for his undead army. The castle lies dormant now, save for a colony of rogue ghouls led by the vile Medichern, who moved in after word of Malenkin’s departure spread. Medichern was a free willed undead who broke the mental thrall of Malenkin long ago. He is keenly interested in seeing if there is some way for him to gain greater power, but he lacks the mind for greater sorcery.

The Undercity of Grom’dahal – this is the orcish bastion and city where Gretana rules. Grom’dahal is a deep and impenetrable fortress, and the place which warlord Moghar must crack if he intends to gain control of all the Kraggit orcs.

More Threats to the Tower of Malenkin:

Queen Sepitaire, General Heidolan, King Flabbag and Warlord Doomgar
The queen of the Eradariin of the north in the subterranean Empire of Zyphente has marched on Malenkin’s tower to the south. She has with her the greatest eradariin general of the dark, Heidolan, a ranger and acolyte of Shaligon. King Flabbag, the goblin lord has allied himself with her as well, and the Kraggit orc warlord Doomgar has also thrown in. Together they command a force of ten thousand, marching to sieze the entire region in a massive power coup in the Lower Deep.
Sepitaire has a reason for he resire to take the tower: she had a vision from Shaligon herself suggesting that the tower was necessary to the survival of her kingdom of darkness. The Horde of Piscrael is rising in the east, gathered around the mountain if Piscrael’s Blight, and it marches first to ensnare the Mother of Monsters in the region of Correnstal…the land will be purged of all who dare stand against the demons. The tower will let her unlock the secret to saving her people from Piscrael’s abyssal army.

Citra, the Banshee Queen
The elven woman once in love with Malenkin was turned into a dark being of power in the shadowfell, and she seeks her revenge. Her long effort to escape back into the world of men was partially what preceded Malenkin’s sudden flight from the region; she has grown immensely powerful after allying herself with Morrigan, the Raven Queen. She is forming a new army of the dead, and plans to seize the tower for her own purposes….


The gnomes of Epinfael near the Pallath Esamanthis have a great interest in reclaiming the tower, for they know it is actually an ancient homunculi grown to near infinite dimensions, a being which spreads wormlike through many dimensions; the paltry portion in this planar realm is but a tny portion of its total essence. They seek to recover ownership of this ancient legacy of the Mythrics that they may properly study it. The armed contingent arrives by dirigible with 200 gnomish marines and 60 gnomish arcane artillerists. 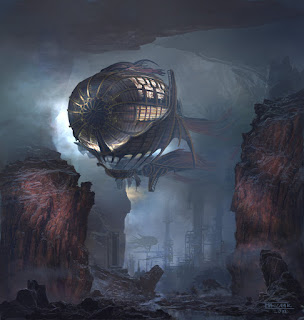 Next: the levels of the tower
Posted by Doctor Futurity at 6:00 AM