Chirak: Mercurios and the Pellucid Kingdoms

The Pellucid Lands of Chirak are a vast stretch of south eastern kingdoms that share a common ancestry; the ancient Pellucids, who like the Romans rose to greatness and then were decimated back to a barbaric dark age....although in Chirak this was due to the machinations of Kasdalan and Lady Poe, rather than barbarians at the gates. I've expanded quite a bit on this, so for XMas I would like to share.... 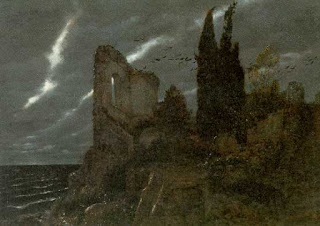 Pellucid was founded out of bloodshed and died—twice—by the sword. Roughly twelve centuries ago the earliest barbarian tribes to organize and unite in the lands that would later be called Mercurios, Hoagarit, Atrual, Nubirion, Correnstal and Dragos forged a vast array of dissident kingdoms. Each small kingdom was ruled by a resident warlord of local power, but little influence…or interest….beyond his squallid borders. The lands struggled in this manner for centuries, and when Agamar was a strong empire to the north the Pellucid barbarians of the south were a minor concern.

Roughly ten centuries ago a disaster befell Agamar, as the Occultic people that were displaced by an unknown cataclysm in the region of Eredoth began a great migration. These tribes, known by many names, formed the people that came to occupy the lands of Xoxtocharit, Hoagarit and Nubirion. Each of these tribal groups were distinct from one another, though all shared common ancestry. The Xoxtocharit displaced the Agamar, wiping out the empire after a generation of conflict. The Kaz’Duli, Atzili, Xoxtocharit and Zapun settled in the region, assimilating the survivors of the Agamar empire that did not flee west to Old Syrgia.

Southward the Hoagarit, a fierce tribe of horse warriors migrated, along with the Nubiri, a diaspora of lesser tribes who were outcast from the rest, unwilling to submit to the diabolical rule of the Xoxtocharit. These tribes crashed into the frontier borderlands of the old kingdoms of the Pellucid people, and it was this century of conflict that led to the loss of much territory. In the end, the people of Nubirion colonized a vast swathe of the eastern forestlands of the coast, while the Hoagarit annihilated the aggressive defending tribes of the northern plains and mountains of their territory. When all was said and done the total territory that was “Pellucid” had contracted dramatically; more than half of the old people’s lands had been lost. It was only through the efforts of a single great warrior, Eddernias, that the invasion from the north was turned away. Eddernias became the first coronated Emperor of Old Pellucid.

The Pellucid Empire lasted seven centuries. During that time it dealt with repeated invasions from the north, reconquered much of the Nubirion region, staved off invasions of the Hashykarystir from the southwest, one grand invasion from Kasdalan to the south that effectively shattered the empire, though it did rebuild, and the final deathblow which was brought about by internal dissent. Three and a half centuries ago there arose internal strife brought about by a difference of religious views. The empire, weakened as it was and led by the last Emperor Pallitus collapsed in a short twenty year span due to religious warfare brought about by the Dragosian province where worship of the old teaching of Malib had resurfaced and been embraced by the nobility, even as the colonials in Correnstal were drawn to the heretical faith of Memnos. The cult of Laddaskar was growing at the time, replacing the old Pellucid Sun Temples to Pallath, for the priest had been all but powerless for centuries. When the empire collapsed, so too did the last established worship of the old sun god.

In the wake of this collapse the empire split into three distinct regions that eventually became kingdoms in their own right as well as multiple northern independent city-states. The Pellucid people continued on, but no longer united as an empire. These regions included Correnstal, Dragos, Varkal, Mercurios, and some would even include Astrual and Talael to the north, though both regions experienced much change in the wake of the Occultic migration as well as having a strong mix of people descended from both Pellucid, Occultic and Agamite blood. For practical purposes, when referring the Pellucid Kingdoms any of the above entities qualify, but most people mean Mercurios, Dragos and Correnstal.

Mercurios was forged out of a bloody religious civil war, and as a result the old temples perished as the worship of Laddaskar became ubiquitous. The territories of Correnstal and Dragos were willingly ceded, but only after nearly forty years of continuous conflict, ended only when threats from both the goblins of the Kyurtain Mountains to the north and Kraggit orcs to the south forced the human kingdoms to repurpose their focus to slaughtering monsters. Mercurios remained a largely symbolic kingdom under no single ruler, but recognizing a common unity amongst all until the reign of the Dukas clan. The first Dukas to claim the throne did so by slaying the last of the self-proclaimed old emperors, known now as Shyvoltx XI though his proper Old Pellucid title was Shylavios the Eleventh. Iron Dukas the First seized the throne with his own personal army and a horde of clan members, most from barbarian tribes to the south. He was at risk of being deposed when an invasion by the Nithiadians of the then independent polity of Tedroy. Thanks to the tactical savvy of Dukas the Nithiadians were driven from the land, and the other warlords of the fragmented kingdom rallied behind his banner. The reign of Clan Dukas has continued for two and a half centuries now.

Similar stories played out in Dragos and Correnstal. Dragos, which had suffered greatly a century earlier during Kasdalani occupation had been changed profoundly thanks to the southern invaders, many of whom settled in the region and continued to live peacefully after the Kasdalani army fell apart. The Dragosian people were long known for magic, but it was the rise of a new generation of sorcerers with  uncanny skill in necromantic arts that led to the strange path this land took. Dragos fought fiercely for its independence, and won; the power to make one’s fallen enemies rise from where they were slain to fight for you proved to be a great boon and demoralizing to Mercurian and Correnstalian foes alike.

Correnstal had long been a settled province and for which great conflict had transpired. They stood against the tide of goblin invaders six centuries ago, when the old elvish empire, last of its kind, fell in the northern mountains. Out of this early bond with elves and men arose a half-elven king, described as Correnstal’s “First King, Urso Vanasas” He led the first (and earliest) charge against the Goblin Kingdom of the Kyurtain Mountains, and later appealed to his father, Urso Vanel (Pellucid title Vanelias) for his kingdom’s independence as a client state of the Empire. Urso Vanel was a pureblood Pellucid, with no Kasdalani or Nubiri blood in his lineage, but he had fallen for an elvish woman and so felt a certain fondness for the region of Correnstal, so he granted the region under his son autonomy. He would later fall in battle during the rise of the religious civil war that tore apart the empire and led to the rise of the Cult of Memnos in Correnstal.

Today, the three kingdoms exist in a constant state of warfare and strife. Not a year goes by that someone isn’t pushing borders, testing boundaries or outright invading to see what sort of reaction they can get. It has all but become a way of life. Each kingdom is also faced with considerable external threats as well, making it impossible to commit to all out war between one another when so many other enemies demand attention. Mercurios is faced with the ever present threat of war with Nithiad and Kasdalan, even as the Hashykarystir lizard men serve as a constant threat from their wild kingdom of monsters. Correnstal suffers from constant civil war and the looming goblin menace, even as eastern threats emerge from the wastelands. Dragos is both at time laboring under war and peace with the Kraggit orcs even as they wage a two front war with multiple Skeledani warlords.

Recent political events in the region have been turbulent. Each of Mercurios’s sister kingdoms have suffered civil wars, and in Correnstal the resurrected Urso Vanasas has appeared just in time to unite the kingdom against an overwhelming threat from the east. Mercurios has seen it’s late king Garion Dukas perish in battle against the dragon Skar, who has settled in the south mountains and declared the entire range his own. His eldest son Varion Dukas has assumed the throne, and perhaps even the curse of his clan’s legacy….but more on that in a bit.
Posted by Doctor Futurity at 6:00 AM