Fun stuff happened while I was in a borderline coma! Best news I encountered was that Capcom, maker of Resident Evil, will be doing a remake of Resident Evil 2, which was the game that transformed the franchise from "spooky mansion adventure with zombies and monsters" to full-blown zombie holocaust event. From that I gather the remake will (probably) be in similar style to the Resident Evil 1 remake....a faithful rendering of the original, with a cleanup on graphics and controls.....but it's possible they may intend to make it more modern; who knows. I think Capcom has fully gotten the message that Resident Evil 6 for all it's glorious action stuff, was not really the direction RE fans want, so hopefully they won't try to "remake" RE2 in that mold.

I'm thinking the video was specifically for the American crowd, as it doesn't mention Biohazard as a title once. 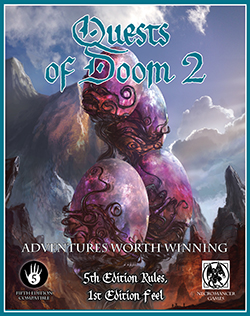 Speaking of Awesome Stuff, Frog God Games Necromancer Games is producing Quests of Doom 2 for D&D 5th edition! The book contains formal conversions of some of the One Night Stand modules and others. Six new scenarios, all mid-level (5ish), and they are doing a special "preorder" program rather than a Kickstarter, which I rather appreciate. If you'd like 5E versions of these modules, or just don't own them previously (tip: they're worth owning) now's the time.

The modules featured in QoD2 are: The Spire of Iron and Crystal, The Mire of Mourning, Death in the Painted Canyons, Jungle Ruins of Madaro-Shanti, MCMLXXV (yes, really!), and Grimmsgate. Yes, two former Kickstarter specials of S&W Complete are in there! Cool. There also two dozen new monster stat blocks in the back. Even if you're into parting out modules, there's a lot here to cannibalize. Plus, the PDF is out now.

Deluxe Tunnels & Trolls is now in print and it looks like the shipping process is starting. Still got another week or so before the hard covers are finished, unfortunately (for me, at least). Ken has some great photo montages of the process. Interesting stuff!

As soon as I do have my copy: I'm dropping The Dungeon of the Bear on one of my groups. Soon......

I did get some decent time to read Cypher System while I was recovering. I really like it. I can't honestly explain why The Strange and Numenera didn't grab me, but Cypher System, by stripping away the settings lets the reader focus on learning the rules and thinking about how to use it. This method works really well for me; I may spend too much time trying to decipher the multiverse of the Strange or the infinity of Numenera, and in the process lose focus on the rules themselves. But with Cypher System, I'm already thinking about my dystopian quasi-Appleseed inspired future SF setting, or a straight hardcore fantasy setting built entirely from the book's own sample material. Good stuff.

I think my only reservation at this point is the fact that Cypher System is a "diceless GM" system...the GM never rolls. If you've ever had one or more players in your group where getting them to do anything (even a simple defense roll) leads to weird decision paralysis....this might make you itch a bit!

Jokes aside, Cypher System is making me both want to run and play it. It does something that multigenre systems have a hard time doing: it provides a wealth of setting-specific flavor for each of its identified genres, and a design process for characters that is very consistent and easy for the GM to control and the players to grasp. Savage Worlds pulls this off, too, but chiefly by keeping its core conceits to a certain style...but that style defaults to "competent, specialized heroes with some really interesting descriptors, types and foci." I say the last three because once I grokked the significance of the concept and how it's fundamental to character design the system really came to life. In other systems you can say "I'll play a Rugged Space Marine who Talks to Machines," and with some time and effort you can make that happen or get close. In Cypher System you have a defined descriptor (rugged), type (space marine--warrior), and focus (talks to machines) ready to choose from among dozens of others. It's really cool, and more importantly to me it's really fun.

I've only got two* other games right now that I both want to run and play: D&D 5E and Savage Worlds. And Savage Worlds should be worried, because Cypher System looks like some mean competition. 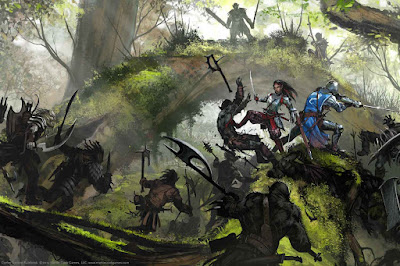 *C&C and S&W Complete are games I want to both run and play as well, but I sort of group them in with D&D.
Posted by Doctor Futurity at 6:00 AM