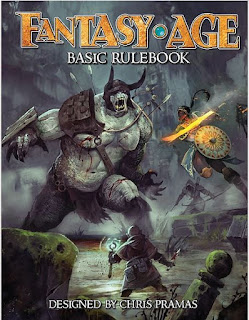 If you've been waiting for your pre-orders like I have, then know that they will be arriving soon. My FLGS got my copy of Dragon AGE in and it's a really amazing looking book...like, a coffee table art book sort of deal, the kind you leave around so people can ooh and ahh at it.

Fantasy Age is slimmer and more utilitarian, but it also looks very playable, and is also gorgeously laid out. Alas, my copy is a 1st printing and has the "interlligence" printing error on the character sheet.....but that's okay, they've got one here that's spelled right. If you don't mind the typo there's a form-fillable version here as well.

Fantasy AGE is hitting at the right time. The market is ripe for mechanically easier game systems that still have some meat on them....people like systems that offer interesting choices but don't require excessive rigor. Fantasy AGE also caters to a slightly different sort of fantasy from D&D, while still being very familiar.

Characters start with nine ability scores with a -/+ modifier from -2 to +4. You have six core races to pick from as well (human, elf, dwarf, gnome, hafling and orc). FAGE adds social class and background rules designed to support a wide array of settings as well; you figure out your social class and then an appropriate background (i.e. merchant, pirate, soldier, performer) out of 24 available choices.

After that, you've got your class. There are three classes in FAGE: mage, rogue and warrior. Each one provides rules through level 20, along with optional specializations (such as mage hunter, assassin or berserker), of which there are twelve. You can also get a focus for a really good ability score. Talents (FAGE's skills) round out the character options. Mages can also gain access to spell arcana, of which there are twelve (each arcana encompasses a handful of spells related to the arcana type).

The gamemaster section includes about 20 pages on how to run the game, 7 pages on magic items, and a bestiary section with fourteen adversaries provided. It's missing a conventional monster/animal list....no wolves, for example, but does provide some good starting points for GMs. While a Fantasy AGE campaign isn't as likely to be focused on the slaughter of monsters as D&D tends to be, you'll probably find yourself wanting to pick up the AGE monster supplements on RPGnow.com* or cribbing beasts from Dragon AGE until a more robust bestiary is released. Also worth noting is the Midgard Bestiary has an AGE edition*. Those resources ought to hold us over until a proper Bestiary is released.

Wrapping up the book is a short section on world building and a setting/adventure location to get you started. All told, for 144 pages it's a nice, compact set of rules with plenty of meat. If you can sustain yourself on the meager adversary offerings you'll be okay --for a while.

I haven't seen the Titansgrave module yet but expect to have it soon (ordered it via the FLGS). I do happen to have all of the AGE System PDFs Green Ronin offers, and for the price they are worth it if you are in to the system.

1. The stunt system. It's a dynamic combat mechanic that is only rivalled by Runequest 6's combat system.

2. Lot's of flexible character design features. You can make a lot of interesting characters in this system, but it remains focused and easy to roll up new PCs. While it has only three classes, the dozen specializations, numerous backgrounds and talents/focus rules make for a wide range of character options.

3. Emphasis on the fantasy tale vs. just monster killing/dungeon crawling. To be fair, D&D 5E (for example) provides lots of tools to do all sorts of cool stuff, but then limits the bulk of it's XP system to slaying things. FAGE provides a more well-rounded experience as part of its core design.

4. Ease of play. It's all about six sided dice, and the game has some very clean math in my experience.

5. Gorgeous, readable book! This is harder to achieve than it sounds, but Green Ronin really knows how to produce a nice looking, easily accessible tome.

1. The "interlligence" typo is indicative of a few such editorial gaffs. On the plus side maybe the already-planned second printing will fix these issues.

2. It really needs more adversaries as well as more conventional beasties statted out in the core, or in a bestiary hopefully out yesterday. But with the PDF and Dragon AGE resources out there you can make do for now.

3. This is still definitely a "basic book" in the sense that it gives you enough to run with the game (a lot more than the D&D Basic Rules, to contrast) but after a year of using these rules I bet I'd start wishing for some follow-up material. I am confident Green Ronin has plans, though.

EDIT: I've bounced around a lot on what system(s) to use for my Sarvaelen (Watchers of the Sullen Vigil) setting....now thinking Fantasy Age might be the best fit....hmmmmm!


*All of the old AGE System documents are directly compatible with Dragon AGE but need minor conversion to Fantasy AGE, which uses some slightly different ability score names, and the combat skills (formerly dexterity in DA) is now split between accuracy and fighting scores. Abilities and attacks seem to mesh fine, however. Hopefully Green Ronin will think about releasing Fantasy AGE -compatible editions of these prior works that require no effort at conversion.

Posted by Doctor Futurity at 1:00 PM