Fantasy AGE: Pelayo the level 10 warrior vs. that orc with a pie -- round two 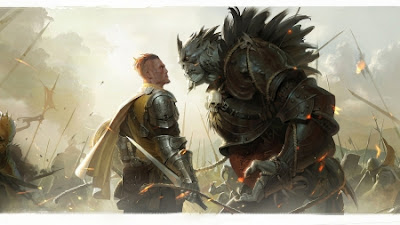 So a few years later Pelayo, a seasoned wandering hedge knight from a foreign land, is passing by the Dungeon of Gavarask the Pie Lord, and he decides he's hungry. He enters, finds the room with the orc with the pie whom he graciously let live some years ago. While Pelayo has been adventuring, exploring and leveling up, the orc has been....baking and eating pies. He's still that same orc, basically.

For reference, here's Pelayo at level 10:

On round one the door flies open and Pelayo announces, "I'm back, pie orc. Give me your pie!" He still has no stealth, so pie orc has been quietly setting the pie down and bringing up his maul, which also doubles for a baker's rolling pin.

Initiative is rolled: Pelayo gets 16 and the orc gets 8! It's looking like a bad day for the baker.

When Pelayo was last here he was carrying a torch and shield when he entered the room. This time the player has declared he's got the torch on the ground and the shield and axe ready. The GM rules that this is low light conditions...the torch is on the ground, in the hall, and the warrior has to charge in front of his light source, partially obscuring the nocturnal orc in shadow. This will mean a -1 penalty to attack rolls, not much at this stage in the knight's life.

Pelayo takes a major charge action immediately, for +1 to his attack. He Rolls to attack, at 3D6 + 6 for fighting, +2 for axe focus and -1 for low light conditions. He declares an expert strike as well, boldly adding +3 to damage for -3 to attack. His total attack roll then is 4, 4, and 5 for the stunt die (doubles make stunts!) for a total of 17...orc is hit, and hard!

With 5 SPs Pelayo goes for the gusto and spends all 5 points on a lethal strike for +2D6 damage. He rolls 4D6+6 for damage then +3 more for the expert strike, totalling 25 points. The or's armor soaks 5 so the orc takes 20 points. His health is now 10.

The orc hasn't quite caught on that Pelayo has moved up in skill and talent, so he goes for a strike at the warrior, doing an All Out Attack (+1 damage, -1 defense). He rolls, totalling a 4, 3 and 3 on the stunt die...doubles for him as well with 3 SPs, but only if he hits! His total is 14 however...and Pelayo's defense is 16. A miss!

Pelayo laughs and retaliates with an All Out Attack as well as another expert attack, then makes a Press the Attack minor action should the orc try to flee. He rolls to hit, getting 2, 5 and 2 on the stunt die. His attack total is only 13 but he still hits. With doubles and 2 SPs he can pull off a little stunt: he'll opt for a disarm; he prefers to keep the orc alive and making pies in the future. The damage dealt is 12 this time, so the orc takes 7 points dropping him to 3 health. On a contested attack roll for the disarm Pelayo rolls 17 and the orc gets a measly 10....he's disarmed! The maul flies 7 yards away.

The GM decides the orc makes a quick intelligence check (difficulty 11) to see if he realizes how outclassed he is. He rolls a 10 with no intelligence modifiers....nope! The orc scurries over to his dropped weapon to pick it up; Pelayo is hot on his heels thanks to the Press the Attack action he took.

Next round Pelayo opts for a normal attack, no specials, rolling a miserable 1, 1 and 2 on the stunt die. He has a base attack modifier of 7 however in low light, so he still got an 11...plus doubles and 2 SPs. So even with a miserable roll Pelayo hits.*

When you deal what would otherwise be a killing blow in FAGE you can instead knock out an opponent. Pelayo opts for this: he spends his 2 SPs on mighty blow, dealing +1D6 damage to his attack. He rolls and deals 17 damage to the orc, who takes 12 of it and is technically killed....but because Pelayo pulled his punch, the orc is instead reduced to 1 health and unconscious.

In FAGE characters who hit zero health aren't actually dead...yet. They die when remaining at 0 health for 2+constitution rounds. For Pelayo he has 6 rounds before dying if reduced to zero health. For monsters this rule only applies to major NPCs....and alas, pie orc is a minor NPC.

Still, Pelayo likes pies, and so he's only rendered the orc unconscious. He triumphantly takes his pie and moves on to greener pastures.

Combat is still a process of multiple blows for foes of lower level, but the risk is alleviated...dramatically....to the higher level opponent. FAGE is a system in which not getting hit is a viable strategy, and wearing armor for protection dramatically extends your lifespan. Pelayo at level 10 could probably face of against one major threat in the book's list of adversaries and live to tell the tale easily enough....but I still wouldn't pit him against a dragon or similar dire threat.

Stunts continue to impress and baffle. As characters advance they unlock new stunts specific to their class or reduced cost on other stunts. Stunts, of course, require rolling doubles to take effect.....and the stunt die tells you the number of points to spend. It still feels like this mechanic could benefit from a resource players can spend to force them on occasion, but I admit, in my various sample fights they tended to pop a lot, often to great effect.

Despite cleaning the orc's clock, I suspect Pelayo at level 10 would still find a half-dozen orcs more of a threat. The higher level characters in Fantasy AGE are not quite the combat monsters seen in D&D. Although, that said, if Pelayo has a Defense of 16, and the average orc rolls a 14-15 at best, then they need to roll above the average to have a shot at hitting him. Pelayo's odds of surviving against 6 or even 12 orcs are definitely higher than they were a few levels earlier. If he had an enormous 20 defense then the orcs would have to roll a 16 or better on the dice to have any shot of hitting him....this has an interesting side effect, though, as to get 16 on 3D6 you have to roll one of the following:
6,6,4
5,5,6
6,6,5
6,6,6
....so any orc that does land a blow is also going to get stunts to pull off. At this stage, it makes more sense to pump SPs into bonus damage than anything else, since hitting a second time with lighting strike is less likely to succeed.

Because extra attacks are prompted by stunts, most damage is dealt through increasing your initial hit in various ways. This has the effect of making any fight longer but more interesting, since things in the game all tend to hit pretty hard....but good armor can really go a long way toward keeping you alive. The orc, for example, if he had managed to strike a blow would have dealt 2D6+4 damage for an average of 11 points, but on any given attack it is likely Pelayo would have suffered only 4 actual damage to his health. Fatigue and bruising, basically. This concept (high health) is very much like D&D's high hit point totals in that sense.

*FAGE doesn't seem to have a fumble mechanic that I can find, and it doesn't need a crit mechanic with the stunt system in place. Unless I'm missing something, it is possible to have no chance of failure...as Pelayo here, for example, cannot miss the orc at all unless the orc takes extreme defensive measures.
Posted by Doctor Futurity at 6:00 AM