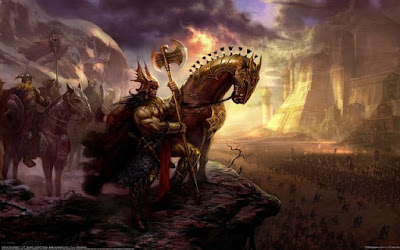 After testing out combat with a level 1 warrior and an orc, I thought it would be interesting to scale up the warrior to level 10 to see how he fares with some serious experience under his belt. Is a Fantasy AGE warrior significantly better at killing orcs at level 10, or just better at taking lots of damage? Let's find out!

As characters advance in level in FAGE they gain their constitution+1D6 in additional health. For Pelayo that means by level 10 he reaches 114 health. After level 10 they only gain constitution for health.

All of the above is on top of the class ability you gain at each level. Level 4 is significant in that you pick a specialization path: a focused warrior type. The book has 4 specializations for each class, and the warrior options are guardian, berserker, knight and mage hunter. I settle on knight for Pelayo as it's novice level involves a reduced cost for taunting (a stunt option), lance skills and some better mounted combat abilities as it progresses.

The basic rule book doesn't talk about starting with higher level characters,  but I'm going to be nice and let Pelayo acquire an uncommon and a rare magic item: a rare magic battle axe (+2 damage), and a suit of magic heavy chain (uncommon +1 defense).

When I apply it all, I get a level 10 Pelayo who looks like this:

So Pelayo at level 10 can attack with a 3D6+8 roll to hit with fighting 6 and focus in axes --that will hit anything in the book with an average result of 18-19-- and dealing a base damage of 2D6+6. FAGE does not do multiple attacks per round unless you spend SPs to gain extra attacks through a stunt. Since Pelayo didn't do much to increase dexterity, his only bonus to defense is from a magic suit of heavy chain armor, the best armor he can wear until he improves is armor training skill. As a result, his Defense from level 1 to level 10 went from 14 to 16 thanks also to a talent bonus for sword and board fighting at master level. Luckily his armor rating went from 4 to 7. I'm assuming he retains his medium shield as well; shields remain something you can be proficient in but I don't see any focus for them....shield bonuses come from talents.

At level ten warriors do get expert strike. This is basically power attack: the warrior can get up to -3 to hit but gain up to +3 to damage using this ability.

At this level, if Pelayo walked into a small room and found an orc with a pie he would probably finish off the orc in 2-3 rounds unless he rolled doubles and got stunt points. If that happened it would be over much, much more quickly.

A few additional comments: you get several levels where you can either get a new talent at novice level or upgrade an existing talent. It looked to me like upgrading made more sense; stay focused, essentially. However you could definitely make a very "broad spectrum skill" character with a lot of novice level talent across all sorts of stuff in FAGE relatively easily.

You could also try to game certain stats to maximize defense, damage or attacks. I aimed for a more robust fighting score, improved strength, and ignored dexterity. However, I had a total of 5 advancement points to spend on primary abilities for a warrior by level 10, so I could have thrown them all in to Dexterity, ignoring the rest, and gotten it to 6 by level 10, giving him a Defense (with shield and talent bonuses) of 20, which is actually really good. This could be a viable strategy....his initial fighting score was a 4 to begin with, and his strength 2, so he'd have an attack modifier of +6 with axes and a 2D6+4 with his magical battleaxe for damage. The loss of 2 damage and 2 hit bonuses is traded off with a gain of 4 in defense.

Ultimately, this demonstrates that there are a lot of ways to build a fighter in Fantasy AGE, and that I've only just scratched the surface on "high damage" types vs. high defense. Pelayo as he stands is a decent damage dealer with some mounted combat skills that make him formidable outdoors, and an ability to hold his own in melee combat. Given how tough orcs are at level 1, it's hard to imagine how he lived long enough to make it to level 10, but a judicious dedication to traveling in the company of other mercenary adventurers would play an important role in success.