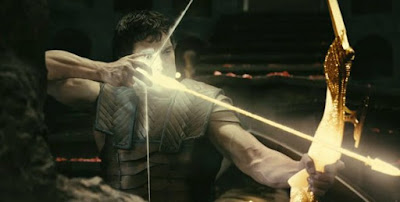 The Force Bow is enchanted to fire endlessly replenishing magical arrows made of force. Each arrow generates the moment the archer grasps the bowstring or prepares to fire, creating an arrow or bolt of pure force. The weapon's ammunition deals force damage on impact (not piercing) and disappears one round after the damage is dealt.

The original Force Bow was crafted by elven spell-archers in the old Saric Empire as weapons of great destruction with an infinite payload. The arrows, while made of force, can still sustain additional enchantments from spells and effects (such as fire) and will also burn brightly --like a sparkler-- if magical or ordinary torch fire is applied, adding 1D10 damage if ignited and fired within one round.

"It was as if the elves rained hell down upon the forces of the Enkanneth in those days, and ne'er once did they want for an arrow to fire."--Old Elven Tale of the Silver Coast