Character Creation in Fantasy AGE: rolling up a level 1 warrior 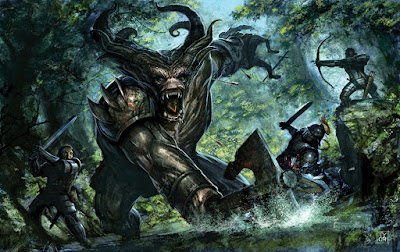 I haven't done a walk-through on character generation in a game system for a while, so time to visit one of the newer games out there: Fantasy AGE!

Character creation in Fantasy AGE is similar to Dragon AGE, so if you've played the latter before (presumably in it's three boxed sets) then you'll see a lot of similarities....they are about 95% compatible, with just a few new tweaks to the FAGE edition of the AGE System.

The rules describe character creation as a nine-step process starting with a concept: My concept will be a warrior named Pelayo who wanted to be a mage but didn't have the aptitude for it. I'll let the devil flesh itself out in the details as we roll along....

Step 2 is to determine the nine abilities in FAGE. You can buy with points, assign numbers or roll, referencing a chart for the results. I'm going to roll. Since FAGE uses a numerical range from -2 to 4 for initial character stats the 3D6 roll you make for character generation is designed to give you some random scores along this spread. After rolling for Pelayo I get the following results:

Pelayo has no bad stats, but judging from his intelligence and willpower I can see why he flunked as a mage....

Step 3 has us choose a race. Pelayo is human, so let's see what FAGE gives them: you get to add 1 to fighting, pick a focus from either constitution (swimming) or dexterity (riding) (I'll go with the latter as slightly more useful), a speed score of 10+Dex (so 12), the common language and two benefits on the "human benefits table." Everyone in FAGE has a benefits table, letting you gain a bit of a random selection to your racial type. For Pelayo I roll twice and get +1 constitution and focus in accuracy (brawling).

Step 4 determines our social class and background. Pelayo could come from riches....right? I roll 1D6 to determine and get....1. So Pelayo is an Outsider, a barbarian sort of guy from "somewhere else." Not a local. Although I can now choose background I decide to roll instead, getting a 6: a wanderer. Okay, makes sense.....from the focus options I pick constitution (stamina) since it sounds like it fits well with the hearty travels of a man with no home.

Next up is Step 5: the class. There are three classes in Fantasy Age: the mage (spell caster), rogue (expert type) and warrior (hits things hard). Level 1 in FAGE is designed to be a "learner's level" so you don't start stacking complexity on to the class until later on (level 4 is where you can pick a specialization, for example). Classes in FAGE are otherwise very similar to D&D classes, in that they determine starting health, weapon and armor choices as well as key abilities.

Pelayo is destined to be a warrior, so the choice here is easy. Note that there are no specific multiclassing mechanics in FAGE. If you want to make a sword-wielding mage, for an example, then you'll likely want to pick mage and then specialize in "sword mage" at level 4.

As a warrior Pelayo gets a range of primary and secondary abilities, as well as 30+constitution+1D6 for health; I rolled a 2 so Pelayo starts with 36 health. He gets brawling weapons group for proficiency and three others: I pick axes, bows and spears because that sounds about like what an outsider wanderer would know how to use.

For his level 1 abilities Pelayo can pick two novice level talents and gains novice in armor training automatically. For his two novice talents I pick weapon and shield style and archery style: shields, axes and bows is my thought. Note that the class description lists what you can pick....but you really need to look up the talents in their section as each has requisite requirements that you need to meet. For this reason an initial choice mine (two handed style) was ruled out because Pelayo's strength is 2 and he would need 3 for that talent.

Step 6 takes us to equipment, but before I go there I want to read up on what my two talents mean. As a novice in Archery Pelayo gets a +1 to damage against close targets (within 6 yards). For weapon and shield he gets the full shield defense bonus as a novice.

On to equipment! It's always interesting to see how a game handles equipment, because you can quickly tell what the game's style and focus is by the way gear is distributed. Some games stick to the "write it down or you don't have it" formula along with a concrete cost you pay for goods. Some games dispense with the cost, moving to a flexible (but annoying) wealth mechanic in which gear is a thing...a prop....but not necessarily a focus. Then there are games that treat gear like an effect or a cosmetic thing....I hate that system. Blegh! FAGE, thankfully, is type 1: you do pick your starting gear, but then you get some coin to spend: 15+3D6 silver pieces for an outsider like Pelayo, who ends up with 21 SP.

Pelayo also gets to pick from a selection of starting gear, getting a backpack, clothes, water skin, heavy leather armor, three weapons, and a medium shield. For the weapons I consult the list and pick out a battle axe, throwing axe and long bow with a quiver of 20 arrows. So...with all that gear I guess the SP is pocket change since I don't know what he'd buy with it right now...maybe some rope, which costs 2 SP for 20 yards of the stuff.

Worth noting that anyone can fight with any weapon, but if you're not trained in it you deal half damage and get a -2 penalty to hit.

Step 7 in character creation is to calculate defense. Defense keeps you alive, and is equal to 10+dexterity+any shield bonus (+2 for medium). For Pelayo his defense is 14. Note that no armor value is being added; armor itself has an AR (armor rating) which is subtracted from damage taken.

Step 8 is to pick a name (done!) and Step 9 is to choose goals and character ties. It is suggested that each character have three goals that relate to why he is adventuring, and the ties are effectively what everyone in the group has in common that gets them working together. Since Pelayo is (for now) a solo adventurer I'll provide a basic tie that can work across a spectrum.

Pelayo is now ready to adventure! It's a very clean, concise stat-block. I like.

Combat: combat and most ability tests in FAGE are based on 3D6 rolls plus the relevant ability modifier; one of your dice is going to be odd colored and is the Stunt Die. When you roll doubles then a stunt kicks in, and the stunt die gives you stunt points (SPs) to spend on various options. For Pelayo, he'll be using fighting to attack with his melee weapons and accuracy for his bows. There's a big list in the book of which focuses apply to which abilities.

Ability Tests: An average test in FAGE is 11 or better. On a 3D6 that means you tend to roll 10-11, so the ability modifier will likely sway your direction of success. Furthermore, the adventurer gets a +2 bonus to the check when it relates to his focus. So Pelayo in our example could make a riding check at 3D6+4 for hid dexterity plus focus. It would behoove him to get a focus in axes and bows, soon.

Next: fight! Pelayo knows an orc in a room with a pie who's just asking for it.
Posted by Doctor Futurity at 6:00 AM