Cypher System, Wrath of the Gods and Occult Adventures

Long week, but somehow still got some posts out. I'm backing too many Kickstarters....I really shouldn't be backing any in my opinion; if a product isn't going to be commercially available for sale on release, then I probably don't need it. It's a tough position to take, but truth is, being a backer is an unpleasant experience most of the time, even when you really respect and trust the producers of product. If I stick with any of the projects I've looked at recently it will probably be the one I'm most likely to use in actual game play: Primeval Thule for 5E.

This week copies of Pathfinder: Occult Adventures, FFG's End of the World: Wrath of the Gods RPG and the Cypher System RPG showed up. 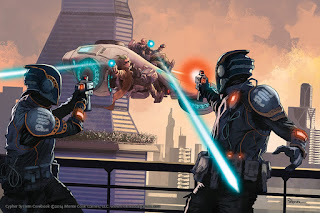 The Cypher System RPG looks about like I wanted it to....a version of the rules that strips out the settings previously presented as Numenera and The Strange, letting me explore what I want to do with it on my own terms. I have high hopes this could be a new universal multi-genre system I will like, will let you know as I explore it in depth.

Wrath of the Gods looks cool, but unlike it's predecessor about Zombies, it appears to be slightly anemic....or over-ambitious is maybe a better way to look at it. That said, the core conceit of short, down-to-earth explorations of end time scenarios remains intact and well done. for those interested, it includes a Norse Ragnarok campaign, Christian End Times campaign and Cthulhhu Stars Are Right end times game....that's gotta be a first, having those two back to back! Each end time event includes a "it's happening right now" campaign followed by an aftermath event (Ragnarok has no aftermath, however). There's one other campaign as well, a "When Nature gets sick of us" campaign with a before and after that reminds me of a Tim Lebbon book I once read. 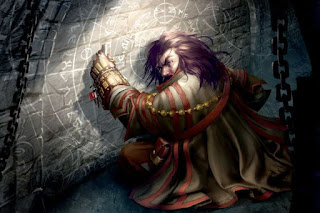 Pathfinder Occult Adventures looks meaty and interesting, but I continue to be conflicted with the game as D&D 5E's mechanical elegance and ease of access continues to keep me busy doing all sorts of other stuff in the same conceptual space. My desire to revisit Pathfinder is conditional to getting my players interested in it again....and we're just having too much fun with 5E to care. This will probably get read once eventually and stuck on the shelf with all the other neglected Pathfinder books. I fear Pathfinder's days may well be numbered, but I haven't given up all hope the system will have future life --yet.

Posted by Doctor Futurity at 10:40 AM