On a thread at rpg.net we were discussing how to improv encounters in 13th Age and I had some suggestions over there which I thought would be fun to immortalize on the blog, too. Worth noting that 13 True Ways also includes some great advice on doing this and designing new monsters as well. 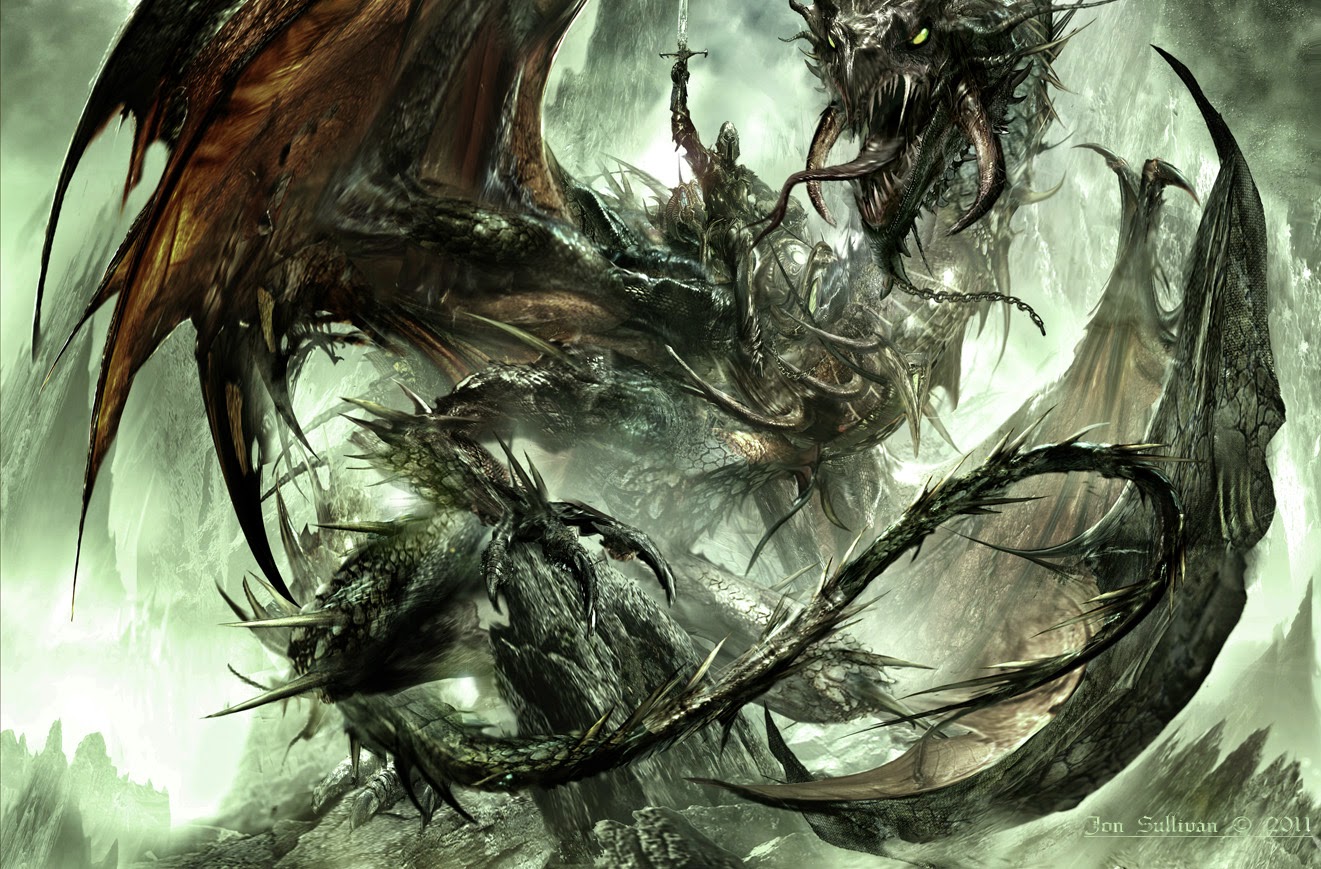 Ad Hoc combat in 13th Age works out better than you might think for original encounters that are more than just hit point bags. The monster chart in the book gives you the quick and dirty stats you need, but the FX of the monsters can be done a few ways. My suggestion is to work out some interesting random effects you pick from on a chart, or pull some examples from the core book or bestiary. For example:

Put it in a chart if you want. Then, unleash on players.....

One sample random encounter I ran included a mechanical warhorse that had been lying in a ruin for ages. It was elementally powered. I grabbed the level 3 stats for a average monster, then added three effects: fire resistance, on escation die 3 it releases double its base damage in an electrical attack that targets all nearby foes vs. PD, and a charging trample attack that triggers on a 16+ on the normal attack and knocks all adjacent foes prone.

The Bestiary has a great section on reskinning monsters, too. It walks you through some great examples on both customizing the look and style of monsters using the same stat blocks, and also shows how to take a Joe Genero NPC and make him something special.

Here's a quick list of 20 melee/ranged combat enhancers you can use:

These powers are chosen because they are quick and easy to calculate values foe while running a game. Pick or roll as you like...

4. on either even rolls or 16+ target pops free and teleports or moves to somewhere nearby

5. On a miss target triggers a +2 to +5 defensive bonus against the missed target

6. Foe gets two or more of primary attack each strike (multi-limbed)

7. Foe's attack knocks you prone on 16+ or impairs you in similar way (nausea, weakness)

8. On 16+ strike foe is removed from play and reappears on its initiative action next round anywhere nearby (teleport or stealth effect) with stealth

9. Foe has a chain attack; each successful strike with a 16+ on the attack roll lets the foe strike another adjacent or engaged enemy

10. On 16+ the foe removes the target from play and places the target back on the battleground anywhere nearby or far away (shadow plane teleport your enemy to where you want them!)

11. Once per encounter (and probably after escalation 4+ this resets) deals double or triple base damage to foe as spite damage on even hit

12. Berserker rage triggers on 16+ or at an escalation die #; monster's defenses drop by 4 but all melee damage is doubled and monster targets closest targets first, regardless of friend or foe possibly

13. Domination attack. Monster's melee or ranged attack pops a per-encounter secondary attack on a hit against MD that deals psychic damage and on a 16+ the target is dominated (difficult save to end) such that the controlling monster dictates either a move or action on dominated foe's round until the effect breaks.

14. Secondary attack triggered by melee attack is either paralysis or incorporeality (can't interact with objects or enemies physically, can still cast spells), with a variable save ends value.

15. Monster turns incorporeal on every odd escalation die value, gains immunity to physical attacks and damage but not spell damage

16. Swift Rush Attack...monster can move, attack, and on a 16+ may move and attack again (possibly up to X times if desired)

17. Pinning attack....on 16+ with melee or ranged attack target is pinned and immobile (save ends, or maybe STR check vs. appropriate DC ends)

18. Ganging up - monster works better in a group; gains an attack or damage bonus or effect bonus when two or more of its kind are adjacent to or engaged with the same target

19. Area attack - nearby foes, typically 1D3 or 1D4 targets, with a typed effect vs. PD or MD dealing damage and possibly ongoing damage

20. Dirt Bag Boss Monster Attack Special - Once per encounter, resetting on escalation die 4+ the boss monster can unleash one hellish attack, either area effect or melee/ranged which affects all targets nearby. Usually includes a save ending ongoing damage or impairing effect, and may include knock-down. 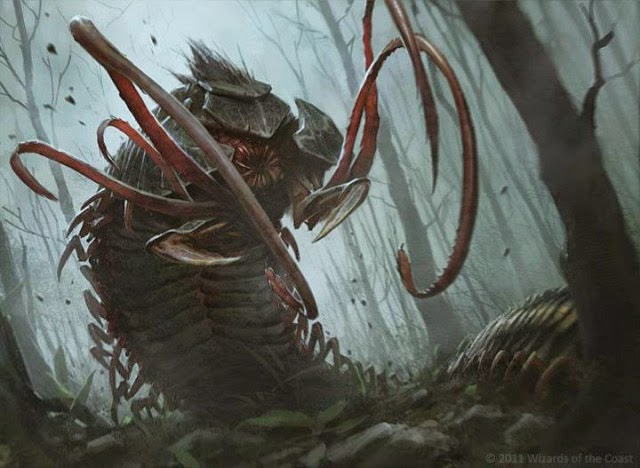 Ungala
Level 3 Wandering Monster
"A crispy looking critter with long scythe like limbs and a centipede like body that gallops like a pony through the Misty Marshes"
HP 45, AC 19, PD 17, MD 13

Ranged attack thorny spines:  +8 vs. AC dealing 10 damage from spiny projectiles against one nearby target; if target rolls 2 or 1 on an attack it is out of spines and can't use this attack anymore.

Special Attack: Domination: Immediate interrupt, Trigger is pinned target tries to break free (makes a save); +8 vs. MD; 10 ongoing psychic damage (normal save ends); secondary effect: target is dominated; ungala frees target immoblization effect and on target's turn the ungala either determines the regular action or the movement of the dominated target. Normal save (11+) to break free of effect.

Berserker: On Esclation Die 2 the monster goes berserk for remainder of encounter and deals 20 damage per melee attack but all defenses are -4)