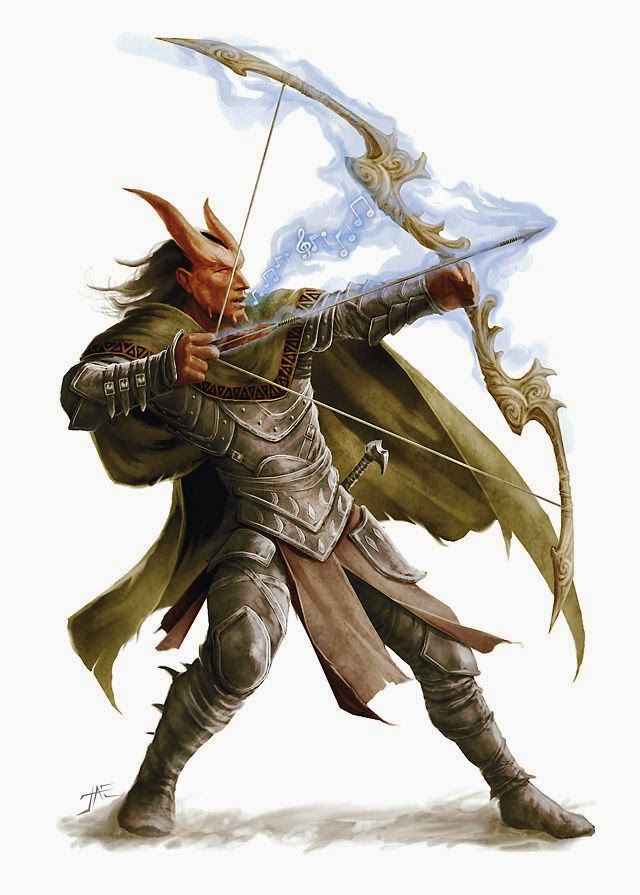 Personality-A decade living in the wilds has prompted Kytron to see a parable or lesson in every aspect of nature
Ideal-Nature; the natural world is the only true glimmer of greatness in the divine scheme
Bond-Revenge; Kytron seeks to destroy those who laid waste to the fortress where is family lived and to bring vengeance down on all who persecute tieflings
Flaw-Kytron places little trust in civilized folk
Trinket-a silver medallion of the Sons of Denarr, showing an eagle grasping a serpent which Kytron took from one of the attackers of his family’s villa.

Kytron Vellasco dwells in the high mountains of the Dryssarian Ranges of eastern Mercurios, where he learned much of his craft as a survivor and hunter from friendly Xernethian elves and even on occasion Kraggit orcs, who believe tieflings are curious creatures touched by the demon gods.

Kytron arrived in the mountains when his family villa was attacked and destroyed in his youth. The attackers appeared to be men and dwarves calling themselves the Sons of Denarr, a radical cult which believed that inhuman taint was a curse and a relic of the old Betrayer Gods. Kytron’s family was slain, but Kytron himself was held to escape by the family huntsman, a kind Xernethian wood elf named Sartain Frei. Sartain led the young tiefling to his people, where Kytron found refuge and a home for the next decade.

Recently the lich lord Malenkin departed his necrotic tower and took his army of the dead with him on a mysterious quest to the west. This disrupted the delicate balance of power in the mountains. Now, a great green dragon seeks to claim the land for itself, as do multiple orc warlords, and human forces are arriving too to see what they can plunder from the lich’s tower. Kytron not only seeks to defend his adopted elf kin, but to strike out and find the killers of his clan and extract his revenge.
Posted by Doctor Futurity at 6:00 AM