My FLGS received the Players Handbook today (albeit not the module....the store owner didn't realise there was a module, I guess). Endless reviews are already circulating so it seems pointless for me to do anything like that, but I wanted to make a few specific observations....

1. This book has the most inclusive art I've seen yet. I was having a hard time finding generic blonde white male paladins anywhere. The cosmopolitan nature of the art is outstanding.

2. The new look of the races is great, albeit with one setback....what the hell is up with the encephalitic halflings???

3. I'm sure many will be pleased with Appendix E: further reading but I wasn't all that excited....we could have used a new list, not just the original Appendix N with a few newer faves added. Still, it's great to have a literary "further inspiration" list in D&D again.

4. I was more impressed with the appendix on the gods. Not only a short discussion and lists of the various gods of the official settings (Greyhawk, Dragonlance, Eberron and Forgotten Realms plus racial deities) but also actual mythic pantheons, too: Egyptian, Celtic, Greek and Norse. Little touches like this are what's going to make 5E shine.

5. There are a lot of character design choices in this book. The multi-classing rules are very simple, while the feats are an interesting medley of specializations that can change a character's focus and feel quite a bit.

6. Speaking of feats, humans have an optional build that lets you substitute "6 stats get +1" for "two stats get +1 each, plus get a bonus proficiency and a feat." When you look at the feats, you'll realize that's a pretty nice potential level 1 bonus, depending on the feat you take.

8. Drow are now a subrace of dark elves who went all evil in the underdark, rather than the long implied "we were normal elves and when we turned evil Lolth made us coal black" theme of prior eras.

10. Least favorite picture so far: toss up between the terrifying balloon-headed halfling on page 26 and the elf with a terrifying sideways eye deformity on page 162.

11. I love the conditions section and the illustrative examples.

12. My first character when I actually get to play (IF I ever get to play since I'm always DMing) will be a warlock.

13. There's a mini monster manual in the back of creatures statted out or referred to in the book, such as might be summoned as familiars or companions. Skeletons, horses, wolves and other creatures of use to players can be found here.

I think I might start a "character a day" event for the blog, in which I create a completely different off-beat character each day. 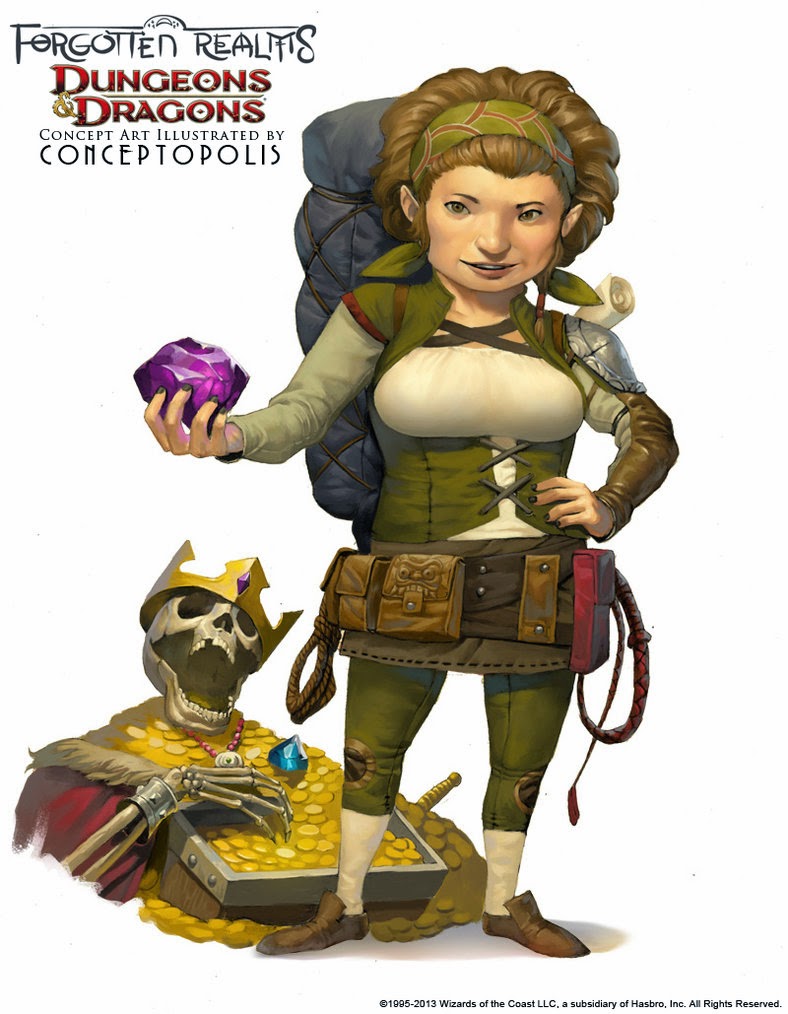 Posted by Doctor Futurity at 9:23 PM