The City of Octzel in the Warlords Era

Octzel started as one of the first cities I detailed in depth back in the 80's, and it has continued to be an important location across eras of play spanning nearly twenty centuries. Like many historic European cities, Octzel has a venerable legacy which outlives empires and kingdoms, morphing and adapting over the ages to survive as the capitol of the region and the center of power for the throne of the kingdom. Octzel is also where my original Lingusia campaign evolved rapidly into a thieve's guild campaign, in which my sister's original thief character fought his way up the guild ladder of the Black Lotus Guild to eventually gain respect and then at last seize control of the underworld. For centuries the Black Lotus Gang was the principle thieve's guild in the city, serving both as ally and enemy to other later characters in future campaigns.

The write-up below was my initial foray into updating the capitol for the era of the Warlords of Lingusia (a.w. 3,500) and will be the springboard from which I evolve the city into a new era of skulduggery and mischief! 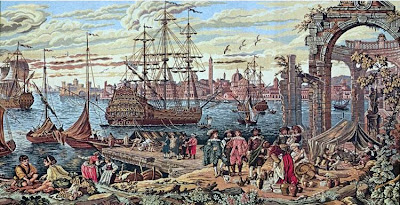 Octzel’s capitol, first founded as a penal colony for Hyrkania nearly two thousand years ago, is one of the oldest cities in the Middle Kingdoms, and despite the centuries of turmoil and the lengthy dark age that descended on the land after the Cataclysm, it remains the third largest city in the Middle Kingdoms (right after Hyrkadin; Yllmar is the largest) despite the fact that the focus of trade between the east and west has shifted to the routes through the Sea of Amech. Octzel remains strong as the center of trade with the north, and especially with is alliances in distant Il’Dranir. The mysterious region of north-western Il’Dranir first opened up to trade and exploration about two centuries ago after it was formally discovered by the Octzellan explorer Targas dann Malik, and the many wonders and mysteries of that distant continent are only now becoming available to the Middle Kingdoms.

Octzel’s landscape has changed over the centuries, for much of its area was located in a shallow bay along the coast, with a larger percentage of the city entrenched along the high cliffs of the bay. As a result, much of Octzel’s old city is now located beneath the lengthy shallow, bay, and it’s palace and old city is now an island in the center of this bay. Beyond, the new city of the land stretches out, and is protected by a wall even greater in size than Octzel’s old wall, which ran along the circumference of the old bay, and is still visible in portions of the city where it was constructed on the highland areas. This is not unusual for many coastal cities; virtually any region of land along the old coast within 150 feet of sea level was immersed during the post-cataclysmic “greenhouse event” in which the great polar masses along the periphery of the world were melted as a side-effect of the cataclysm. Octzel was fortunate that it was built along and around a shallow bay with such high cliffs in the region, and is indeed the only accessible point along the rocky cliffs of the northern peninsula to hold such a position for ships to dock.

In its heyday Octzel was believed to have a population of one hundred thousand or more, if you counted the farmlands and countless villages that dotted the landscape to provide agricultural support for the city. These days the population is believed to be slightly less, perhaps as few as 80,000 strong, but the region has developed several townships. Even the Veraggen Mountains have become a populace location, with half a dozen communities thriving in the region.

The city of Octzel is now divided in to the following regions:

The Old City and Palace

Located on an island in the heart of the bay, Old City (once known as the Inner City) is where the bulk of the most ancient architecture can be found, surrounding the Royal Palace, the same building which was originally constructed by the mad king Donn-Dadera. Those few who are still privy to the many hidden byways and secret passages of the palace know that much of it is now below sea level, and while some passages are now flooded, a large percentage of it remains intact, and seemingly water-proof.

The Old City still includes many famous features that have been with the legendary city since its early inception, including the Wall of Dreams, the legendary Urian Row, and the Royal Gardens, where the ancient remnants of Quirak’s lost tower can still be seen, long ago used for decorative reconstructions by the druids of the sacred grove within the gardens proper.

The largest mansions are located in Old City, stretching high, sometimes to five or more stories, to take advantage of the limited space on the small isle. The streets are narrow, and sometimes not even accessible by cart or wagon, and palanquins are very popular among the decadent rich. The north east corner of the isle, adjacent to the palace, holds the new Watchtower, where the Royal Guard stands strong in protection of the king. It is here, along with large store houses within and beneath the palace, that supplies are stockpiled should the Old City ever come under siege. Such provisions were first begun during the years of the Plague of Unarak, when ships full of undead crew were striking, like northern raiders, along the coast in random fashion. There is a great warship, the galleon called Enki’s Might, still resting along the docks of Old City for display, magically preserved as a relic of the ancient war, as it was the ship that the great admiral Sageros gonn Aleric used to lead the Octzellan fleet against the ragtag undead navy that sailed from unknown parts of the east, to be destroyed not far from the coast of Picadore Isle. This ship, and the legacy of gonn Aleric, who rose up to cast off the sour yoke of his grandmother Catea’s legacy of necromancy to become one of the land’s legendary heroes is a very popular tavern tale in the city these days.

Another popular location in Old City, one known to many for countless years yet now displaced, is the Tavern over the Inn. This tavern was located squarely in the middle of the lowland region of the city, and when the dike-lands were flooded during the early years of the deluge, its owners picked up and moved to a property in the Inner City region of the time, owned by the legendary Black Lotus guild of old times (not that anyone knew of that, officially.) It has since become a famous respite along the Old City docks that eventually sprang up nearby, after the deluge concluded. The tavern continues to earn its name, as the vast and regular levels of construction atop the remnants of older buildings have guaranteed that the tavern has numerous sub-levels, and indeed it even connects to the Under City region, as well. Historically the tavern has served as a safe haven for thieves and other criminals to meet and conspire, and even today it's reputation and legacy continue.

The Under City is a region of underground city streets and shops that were buried beneath newer levels of construction on the island, and served for many decades as a place of respite for the beggars and underclass of the city, until the various thieves and merchants guilds organized to excise the local squatters and turn the Under City in to a place of profit. Over the last few centuries Under City has prospered, but become a notorious place for seedy activities and criminal dealings. Today, the Under City is where smugglers, sailors, thieves and other unsavory types go to conduct business, as well as being a center of trade and commerce for gambling, prostitution and even slavery.

The main city of Octzel is stretched out along the coast, nestled protectively behind the Great Wall, which was built during the dangerous years after the flood during the threat of the Plague of Unarak. The full city proper stretches along seventeen miles of coast, like a great band, and there is a brisk trade among ferrymen to carry passengers from one stretch of the coastal city to the next. To the average visitor of Octzel, the city feels like one long stretch of pleasant townships and burroughs along the coast, all united under one rule. The largest portion of the city is concentrated along the region closest to the isle of the Old City, and here the main city is bulked out somewhat, and includes the main body of the merchant quarters, the dockyards, the fairgrounds and Fort Agaskar, which stands as the center of the Octzellan military, and is the staging ground for all activities that require the king’s army.

Octzel has always been a center of trade and commerce, and the modern city is no exception. It harbors the largest trade center in the Middle Kingdoms for commerce with the northlands of Autrengard, as well as the frontier kingdoms of Chasiere and Hytaskos. It is the only current city in the Middle Kingdoms to engage in brisk commerce with Il’Dranir, specifically the kingdoms of Chaladea, Suri-Varkos and Shemvata. 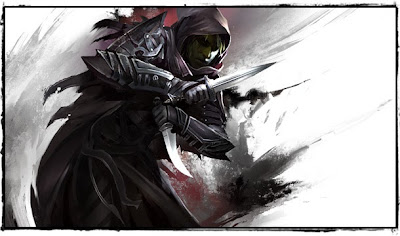 Next up: I'm actually going to provide some additional overviews of other equally appropriate cities for a "medieval bastards" campaign before I decide which one to elaborate on. I may even provide the original (far more detailed) overview of Octzel from a thousand years earlier. We'll see...