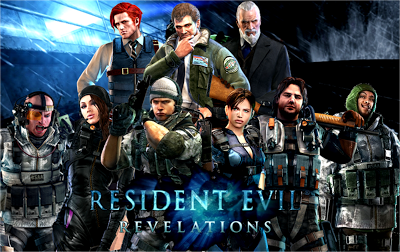 I completed Resident Evil: Revelations unexpectedly last week. I don't know quite how that happened, I'm usually much better about pacing myself and dragging out games I enjoy for months, sometimes even years! Suddenly I'm done with RE:R, I'm almost done with the Ada campaign in RE6, and I'm slowly completing the DLC content in RE: Operation Raccoon City, at least when I can stomach the insane default difficulty level of the DLC. Yikes....I wonder when the next installment of the franchise will show up...probably around 2015-2016 on the next generation of consoles. Sigh.

Resident Evil: Revelations was unarguably closer in design, feel and intent to the classic RE titles (1 through 3 plus Code Veronica), although it's engine is clearly a build from RE 4 and 5. The PC version added in high res graphics and decent model designs, but the mere fact that this started as a 3DS title impresses me. This alone says volumes about what the 3DS can handle, and I'd pick one up, except no one seems to make mature games for the handheld. Likewise, the fact that RE:R was designed for a handheld means that it had a smaller design budget and specific considerations about how it would play, and as a consequence of this it's PC port is actually really damn good.

Seriously...because the game had to consider players holding a handheld title for short play sessions, it made the game's structure built around a digestible series of episodes, each of which doesn't take too long to complete, has (mostly) decent auto save points, and starts off each episode and session with a fun recap on the plot up to that point. This structure of convenience aimed at the handheld market actually makes the game equally accessible and friendly to the desktop PC (and console) gamer who maybe just wants to play a game for thirty minutes and feel like he accomplished something.

There are some games (especially some MMOs) where I don't even bother to log in because I only have 30 minutes and don't want to spend it traveling, on inventory management, or just trying to remember where I left off and why. RE:R has none of those issues, and is incredibly friendly to short-burst gaming. 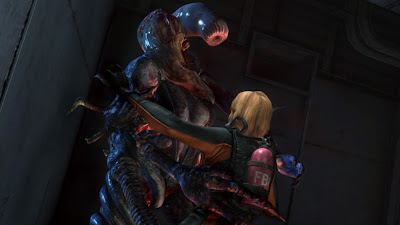 RE:R is also built around a more traditional design and structure, one familiar to fans of the original games. There's a lot of locations and art assets that get re-used, although what's really going on is you're having most of your adventures on a spooky cruise liner, a remote mountain installation, and occasionally in flashbacks to a man-made floating wonder city called Terragrigia shortly before its about to be destroyed. You'll grow quite familiar with the weaving maze of corridors in the haunted ghost ship which Jill and her BSAA partner Parker must explore, even as Chris and his femme fatale buddy Jessica crawl around in the snowy mountains looking for other clues.

The game introduces a bunch of new characters to the RE storyline, and most of them live to the end. In fact I have to say this game did a great job of adding new and interesting faces to the RE canon; we get more of that in RE6, of course, but for whatever reason the characters introduced here in RE:R get more story time, more attention, more fun and cheesy lines and are just plain old more interesting because of this. If there's a RE7 in the near future, I would really like to see Parker Luciani, Jessica Sherawat and Clive O'Brien show up again (although admittedly, some are more likely to return than others, based on RE:R's ending sequence, which is fairly comprehensive in establishing where everyone ends up).

There's really only one character that I didn't see enough of, and she's mostly there as a unique and very persistent foe: Rachel, or more accurately Rachel Ooze. Rachel is pretty much spoken of only posthumously, and her real legacy lies with the Raid Mode events, but her persistent resurrected form haunts your protagonists throughout the game, and it would have been nice to have learned a bit more about her prior to her death and rebirth.


Not only does RE:R offer up a twelve chapter tale in the classic RE:R vein, filled to the brim with things you can click on to learn more cool story bits, find keys and otherwise deal with various puzzles and mysteries, but it also provides a robust after-game solo and multiplayer co-op feature called Raid Mode. The Raid Mode lets you revisit the many areas of the game (it's broken up into roughly eighteen maps), bringing in an array of different characters and costume options (many of which require unlocking over time.). You equip them with tricked out weaponry and proceed to tackle each level in Raid Mode like a mini-adventure, complete with an end goal to reach and an array of threats between you and that goal. This mode was originally conceived in brief way back in the bonus hidden level for Resident Evil 2, where you could play the curiously named Umbrella agent Hunk as he blasted his way through Raccoon City, and over the years this got revisited in various forms including Mercenary Mode from RE5 (and other titles). Raid Mode is similar, but with an emphasis on solo and co-op play it allows you to essentially play through the levels and maps of the original game in an endless array of mini missions, which turns out to be strangely compelling, and a lot of fun. With level up mechanics, weapon upgrading and collecting, alternate skins and characters and a large number of escalating maps, it's a really cool way to extend the life of RE:R beyond the single player campaign. I'll be playing Raid Mode for a long time to come; it's actually more fun than the Mercenaries Modes in RE6 (though to be fair I quite enjoy those as well). 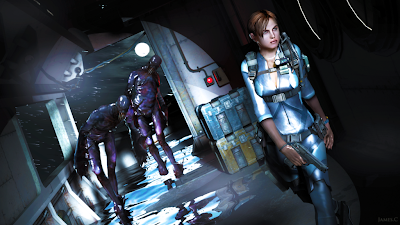 So, long story short, here's RE:R in a nutshell:

Single Player Campaign takes about 10-14 hours, is very fun and feels very much like original-style RE

Raid Mode is a fun extra feature that actually plays out like an endless array of cool mini missions, and allows co-op gaming

RE:R's budget design aimed at handhelds translates into a very easy-in and easy-out style of gaming that prompted it to make good use of its resources to tell a fun, sometimes camp, other times tense and exciting survival horror tale that treats the Resident Evil universe right. I want future titles in the franchise that are more like Resident Evil: Revelations.