Continuing with the overview of cities rife with thieves, I present Arenjun, one of the more Machiavellian cities of the Realms of Chirak: 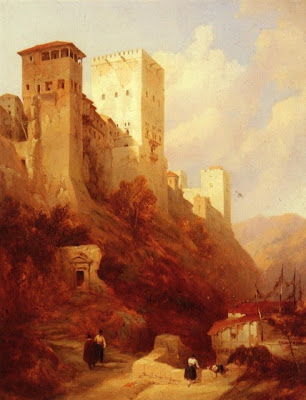 This is the most venerable order of sorcerers in the desertlands of the south. The Magi are a neutral faction that eschews the dogma of both the Preservationists and the Arcanists. They have several members (including Para’kathain) who belong to the Tower of Kaledon and/or the Chronomancers. The Magi still prefer to consider themselves independent (and superior) to the other orders of magic in the world, and regard the mystical history of the Indastrei as the source of their own power.

This order of assassins is dedicated to an enigmatic higher cause, sponsored by the legendary White prophet, a half-elven man of venerable years whose name is unknown to the public. His legend is such that the White Brotherhood is regarded with fear and respect by most citizens of Arenjun and the greater expanse of Shaddizhar. The order is dedicated to preserving the peace in the land, and while some nominally believe them to be a secret police force of the Caliph, they are in fact totally independent and would act against the caliph if he enacted policies or actions that jeopardized the safety of Shaddizhar. The White Brotherhood tracks foreigners of note carefully in their land. They are strongly opposed to Nithiadian influence in the desert kingdom, and are especially discontent with the recent civil strife from the neighbor kingdoms that have spilled over.

The Desert Cult of Onoar

This cult began as a nomadic belief that spread rapidly. In the last century the Cult of Onoar has become popular in civilized regions of Shaddizhar such as Arenjun, and temples have sprung up, built and funded by dedicates of the mysterious Onoar.

Onoar is self-described as a “Lord of Wisdom,” but does not portend to godhood. He is believed to be unnaturally long-lived, being over two and a half centuries old. His followers believe that he teaches the way to perfection in harmony, and that following his teachings will lead to the complacency of the soul, and in turn to the final ascencion of the soul to the heavens. Like the Cult of the Lost Gods, the desert cult believes that the mortal world is a shadow of the splendor to be found in “The Beyond,” and that it must be attained, the gods must be followed, to this mystical destination.
The problem with the Desert Cult, which is otherwise very passive, is that it is militantly aggressive against all other cults and religions. They will actively seek to destroy supporters of other faiths, burn the temples of the Forgotten Gods or the Lost Gods, and despise all such teachings. The prophet Onoar is surrounded by yes-men and a secret cabal of divine practitioners who feel that they are close to ascencion, and that the closer to ascencion they get the more powerful they become (they are usually invokers). The belief that all beings are entitled to, even required to believe as they do is part of this cult’s philosophy. Luckily only for the rest of the region their general disagreeability makes them difficult to grow and expand; the proselytizers of Onoar lack subtlety or guile, and often resort to the ancient tradition of “theologians with clubs” instead. 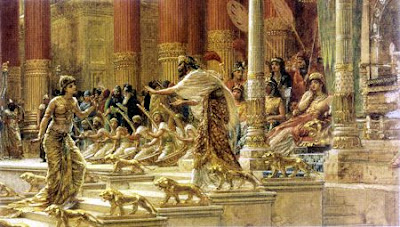 This open-air tent market runs all day and in to the night, weather permitting. Arenjun’s bazaar is regarded as the finest market on the Southern Coast, and rivals or exceeds It is open to all, and daily fee collectors move about collecting a nominal charge for use of the markets. Sales outside of the market are banned to foreigners. The fee will vary according to the perceived wealth of the merchant. Locals and long-time foreigners can pay a monthly cost if desired.

Currently, due to the strife and bloackade from the Nithiadian city-state of Polides, the bazaar has been suffering somewhat, as the Caliph refuses to agree to cut off trade relations between Arenjun and Eterna in the north, one of the few Nithiadian allies with Arenjun. Still, traders and caravans from Eredor, Westgate, Grelmaine, Mercurios, Espanea and beyond regularly find their way here, despite the blockade attempt.

The Palace of the Caliphate

The center of Shaddizhar’s power, the palace is a vast complex, larger than almost any other complex in the Sea of Chirak region, said to be home to more than 10,000 officials and twice as many slaves. It is a veritable city unto itself, and is regarded by the scholar and explorer Zemaxas of Masiria as one of the Nine Wonders of the World.

Like most cities, Arenjun has a temple district. Unlike most cities, this one is surprisingly expansive and liberal, with temples or monuments to many entities, including avatars, dead gods, both the cults of the Lost Gods and the Forgotten Gods, and temples, monasteries and institutes to more than two dozen philosophical cults and followings to various known prophets.

Some of the temples of note here include the vast Temple of the Forgotten Gods, in which the lost Twelve are presented in iconography and monuments for all to worship in memory and blessing. There are a dozen temples to avatars, including Kalie’yana, Phylos, Obohon, Mardieur Mardieux, Piscrael, Laddaskar, The Lost One, some entity called Scorius, Pallath Enarias, and more. Temples to “mystery gods” such as Hun’hunal can be found here, and a vast monument to the enigmatic Adeas Immortas caps the end of the Temple District, where the elite of the city travel to pay homage to a statue of the ancient “Thirteenth God.” His statue is said to have been here before the founding of the city, and to have been here since the time of the Indastrei, indestructible against all forces. More pragmatic antiquarians date the creation of the statue to the reign of the Caliph Hasrahad, who five centuries ago was said to have unearthed the statue with the aid of the adventurer Nosaj and his crew, and to have hauled it from the Zettaram Mountains to the hub of the city as a monument to the “first king” of Shaddizhar. The temple has but one keeper, a genasai named Kalimas, who is an authority on the lost cultures of the desert.

This massive structure is located along the outskirts of the northern quarter, just north of the palace district. The keep overlooks the sea as well as the southern deserts from atop its plateau, and allows for first sighting of threats from any direction against the city. The keep itself is garrisoned by a battalion of soldiers, and serves as the principle military compound, protecting Arenjun against all threats.

In times of peace the Iron Keep is a fortress and a prison, where the most heinous of the criminals of the city are interred in the near-legendary deep dungeons beneath the fortress. The dungeons are said to descend ten levels below, and are considered impregnable by most, though rumors and secrets abound that the lowest levels open up into the subterranean expanses of the Lower Dark, and that an especially brave and foolish soul can escape the prisons only to become a victim of the vile denizens of the underworld.

The Iron Keep is named for its builder, the caliph Pakor. Pakor founded the keep seven centuries ago, so the stories go, although the reasons for its construction are lost to memory. Ostensibly it was to defend the young city of Arenjun, but in truth there are hidden references to the keep that refer to it as a sort of “cap stone,” and that it was built atop a vast network of underground tunnels that were only later converted in to dungeons. This particular fable suggests that there was once a very ancient and evil entity, a Thousandspawn of unknown name, that lurked in the deepest levels of the Lower Dark beneath the keep, and that at one time this being’s hellish spawn threatened to erupt from the earth and engulf the land in destruction. The caliph and magi Nasaram Pakor held fast against the evil, fighting it back and ultimately constructing a great ward upon the earth of the plateau, then building the Iron Keep around it to protect the ward from erosion or destruction. This story is substantiated by the fact that the center hall of the keep is, in fact, a great chamber with a vast iron pentagram laid in to the stone floor; mages who visit this chamber sense a potent binding magic emanating from the pentagram, which encompasses the whole plateau and sinks deep in to the earth. 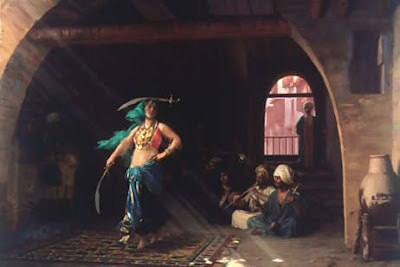