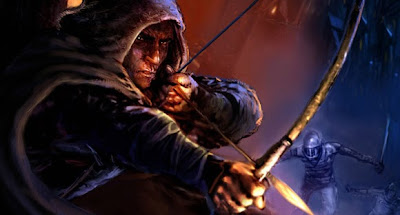 I'm having this vision of a spiritual take on Saint's Row for tabletop fantasy, mixed with the sort of fantastic skulduggery that forms the seedy soap opera antics of novels like The Silent Blade and Spine of the World. The players are all thieves, thugs and scum, born in a large medieval metropolis. If I were to set it in one of my campaigns it would be either Octzel in Lingusia (where I've run similar games in the past) or Uralhat in Enzada, and maybe Corlione in Chirak. The players get their mission statement: you're all bottom-feeders who have grand aspirations to claw your way to the top, but your stations put you hopelessly in the gutter so the only way to social climb is by dragging down everyone else to below your level. Only excluded classes will be Paladins and clerics of lawful good bent. Only excluded alignment will be lawful good, and neutral good or chaotic good need to provide a good explanation for how they function in this debauched society.

The campaign would need a detailed map of the criminal underworld and its associated threats. Magic is the "super power/physics exception" for the game, not so easily acquired --theft from mage's domiciles being one, and players who want to start as spell-casters need to know they've had a grand fall from grace to get to the low station where they start at.

The focus will be on acquiring resources, recruiting NPCs to the guild, snuffing out other guilds, seizing territory and gaining an iron grip on the protection rackets and illicit trades of each city district, and to eventually get enough power that the nobility and the ruthless, hopelessly corrupt city watch take notice of your actions.

I must expand upon this in more detail! Maybe I'll pick one of the aforementioned cities and start developing it for such a campaign on the blog. This could be a great deal of fun! I may have to hunt down some old Thieve's World novels for extra inspiration as well.

In fact....I think I'll start right now, by posting some details of my infamous city of Octzel, the den of thieves which has hosted guild turf for the legendary Black Lotus gang and others in prior campaign eras. To make it interesting and current for me, I'll riff off of Octzel as it exists in the current Warlords of Lingusia era, and will print (or reprint) some of the details of the city so far. Then I'll riff off of the current write-up to expand the city into an in-depth overview of the current criminal underworld and their sordid politics. More to come! 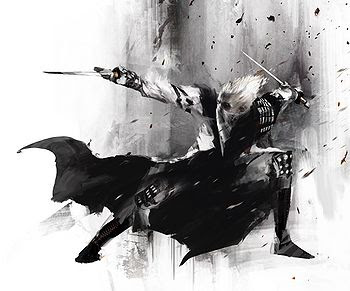 ADDENDA: I'm not actually settled on which city to use yet, so I may present more than one and decide thereafter. We'll see....plenty of material to present, so no rush here!
Posted by Doctor Futurity at 6:00 AM