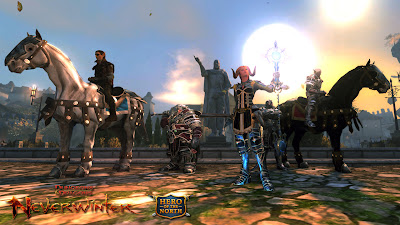 In a series of amusing steps I went from being a little incensed at Perfect World's severely limited "why did you stop playing?" survey to curious about the game and suddenly I'm back to playing. The process worked sort of like this, and suggests some important reasons to consider why NWO is actually a decent game, despite some oddities that may or may not be deal breakers:

Step 1-get back into FR lore/books: I resumed reading Salvatore's Forgotten Realms novels again. Also started reading some other D&D novels that are now accessible on ebook. In this process I discovered that books which once offended my literary sensibilities when they were new (i.e. Avatars Trilogy) are suddenly kind of fun to read. So my reading tastes have shifted with age, apparently.

Step 2-grow annoyed at useless survey: Got that survey, which prompted me to think about key issues I had with NWO. Truth is, I deleted NWO because I didn't have time to focus on it and didn't want to take the time to figure out if it was going to be a costly venture or not....a legitimate issue with all F2P model MMOs.

Step 3-play a medley of MMOs and go "waitasec...": Wife got back into Everquest II with some of her online cohorts this weekend. This prompted me to download EQII to try it out with them. End result: although I sense a really interesting story and background in EQII, it left me wondering why I was doing this when I had other games under my belt that still had lots of time, investment and life left in them (i.e. D&D Online, Rift, Guild Wars 2). So I stopped EQII and skipped over to some of the old mainstays to see if they would pique my interest again.

Step 4-go back to DDO and remember it's got problems: Quickly eliminated D&D Online after a few hours playing through only to lose all the XP again with a party wipe at the end of a dungeon, reminding me of why I never got very far in the game (highest PC I have through normal progression is level 13) and also why I found it so frustrating. Annoyed at beholders I met, wishing another game would let me engage with some iconic D&D critters and environments. Hey...waitasec....

Step 5-Acceptance that tabletop space and MMO space are different beasts (also, bribes): Realized that I ought to just get over the lack of "D&D-like design" in the char gen and just try NWO again. Accidentally discovered I had 200,000 astral diamonds and that these could be exchanged to purchase in-game zen. This got me enough zen to get four characters slots and an extra companion slot. Also discovered I had a code to redeem for an orc wolf buddy (mount?) at level 20. Cool.

Step 6-Scrub brain of expectations, resume game with fresh slate (also, drow!): With a fresh mind I approached NWO once again taking my own advice from my first overview of the game: to treat it as an experience in its own right and not as a D&D-simulator for the MMO-verse. Noticed drow had at last unlocked for everyone, made a rogue. Discovered the rogue is far more fun to play than either warrior class. Why, NWO devs, do you guys hate warriors so much?!?!? So drow rogue for me! 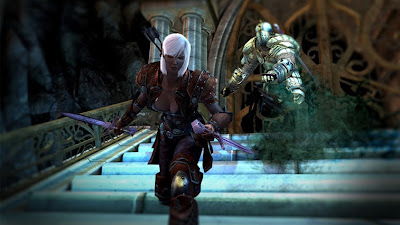 1. treat it as a lore-rich experience in the Forgotten Realms. Ignore the D&D part and get it out of your head that the game should be a simulation of the D&D tabletop experience in terms of rules and processes. If this is hard, go play DDO for a while; you'll either stay there or realize, "Yes, NWO is a better and more rounded experience, even if DDO has a lot of cool stuff...it also has a lot more frustrating stuff, too."

2. Make anything other than a warrior type character. I can say rogue is good, and have been told clerics kick butt. Will try a wizard soon.

3. Remember, even though NWO is ostensibly based on 4E mechanics, it's only superficially so. The similarities are enough for me to really miss my 4E gaming days, but should not be problematic for anyone who had issues with 4E.

4. Finally, and most importantly: don't let veteran MMO gamer jadedness dissuade you! It gets me all the time when I try new MMOs, and it's a real bummer when it does. NWO is better than I give it credit for, but MMO fans are suffering from a serious level of overload and choice these days. I think NWO deserves a bit more consideration than I was giving it previously....although they still need to get more classes in (warlock, ranger, paladin and warlord would be fantastic) and at least one more race (dragonborn). 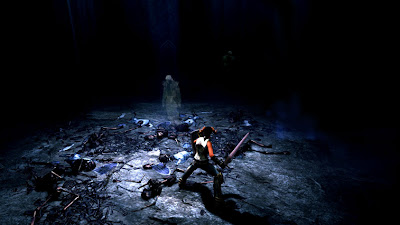 Investing in NWO probably means less time with Guild Wars 2 for me....which is okay; GW2 is a game which commands time in a slower and more methodical way for me. I'm still keeping up with Rift when the mood arises, though. I will soon have my first level 50 defiant rogue over there, and look forward to someday getting her or my guardian warrior to level cap (60) in the laborious albeit interesting Storm Legion content.