Saving Fang from the Pits of Morgul for Tunnels & Trolls 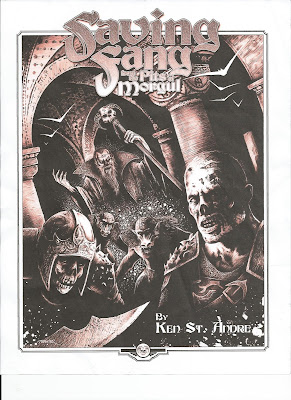 Saving Fang from the Pits of Morgul is a new Tunnels & Trolls adventure that Ken St. Andre just released, and which backers to the Deluxe T&T Kickstarter received PDFs of. The solitaire is actually intended for use with the original 1st edition T&T rules (which are in print somewhere through Ken, I believe) and is officially the first solo ever released for that particular edition, since Buffalo Castle came out with the 2nd edition of T&T.

The book is gorgeous...it's got Simon Tranter cover and interiors (Simon did the cover for my Chirak book, too) and Steve Crompton layout and design so in terms of overall look and quality it's way above the average non-D&D OSR product (or regular D&D-derived OSR product, for that matter). With Saving Fang out that adds this one to Buffalo Castle's revision and the new City of Terrors. From Rick Loomis's latest update it sounds like we may at last be seeing the Deluxe game and mail-outs maybe a month or two late (just guessing) past August....we shall see!