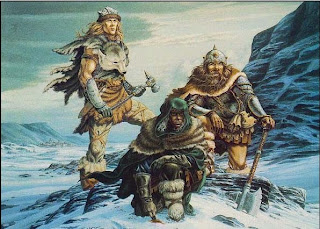 I've been fighting off all sorts of unpleasant sickness lately, as the usual round of viruses have transformed my body into a test lab for sinus problems and bronchial infections. Yay! I hardly ever deal with this anymore thanks to the dry environment of New Mexico...shadows of my walking dead days from Seattle have been haunting me lately.

A side effect of this is that I've had enough energy to read and not much else. I was looking at Wizards of the Coast's lineup of forthcoming novels and realized that their Sundering series is about to be released. I thought about jumping straight in but the first book, by Bob Salvatore, sounds like a lot of Drizzt Do'Urden reminiscing about his prior umpteen novels (to go by the description on WotC's site). This got me to looking at where I had left off on that series....way back in 2000 or thereabouts, with The Silent Blade.

Let me get this out right away: if you're into role-playing game fiction, and like the various D&D novels out there then Amazon's Kindle App is for you. Nook's got problems when they're marking most of these books at $7 or more, and you can breeze on over to the Kindle app and get them for $5.59 apiece on average.

When I got into Salvatore's novels it was with a grudging admission that he might be worth reading if they kept coming out. I'd only been able to plow through Ravenloft novels back in the '90s and my younger self was largely disinterested in most other fantasy fiction. At some point....having to do with a snow-in in Seattle if I recall correctly, I picked up a copy of the first Drizzt novel (Homeland) and decided to at least give it a shot.

It turned out that Salvatore wasn't just popular because he had drow elves in his books. He's a good writer, in terms of telling a story with some larger than life characters. Arguably his characters drive everything...even the Crystal Shard itself should be considered a character given the way Salvatore writes. His books were great, and I caught up to them over a fairly short period of time. I made it to book 10 before Drizzt fatigue set in, and I took a break. Actually, I didn't so much "take a break" as around that time my work schedule dramatically shifted to an all-night run, coupled with a mid-day job that left me maybe 5 hours a day to sleep. And I was developing diabetes and didn't know it, so I was finding the time and effort to keep up on my reading increasingly difficult.

Cut to the present, many many years later. I have a normal job (more or less), a normal household (barring my nearly two-year old impish son) and I've become hooked on e-readers, as they are much easier on my eyes than regular reading anymore--I know, I know a total contradiction from the declarations of all the anti-e-reader naysayers! Who would have thought that aging eyes would find a backlit device with adjustable fonts to be an improvement on the reading experience???? Blasphemy!

Realizing that the Sundering was imminent, and being interested in seeing how this reboot works, I decided to catch up, starting with The Silent Blade.* It looks like there are sixteen novels in succession that I need to plow through to get to the events in the Sundering (we're discounting all non-Salvatore stuff for the moment). The good news is Salvatore remains emminently readable and in that pleasant, compulsive way. It looks like my Drizzt fatigue has thoroughly worn off, too. I've already blown through The Silent Blade in three days, so I might be able to catch up to the new novels within a matter of weeks. I suspect I will experience more Drizzt fatigue before the end, though....we shall see.....

I will say this about picking the books up again....I gotta say for all of Salvatore's great heroes, his villains are awesome. Artemis Entreri (who if I understand correctly takes center stage in the Sellswords Trilogy) totally makes this book.

I may do some more in depth reviews of these novels as I go along. I also plan on returning to the newer novels set in the Nentir Vale (the whole Abyssal Plague novel series) as well. For the record, Don Bassingthwaite's Temple of the Yellow Skulls is a fantastic, compulsive read as well. 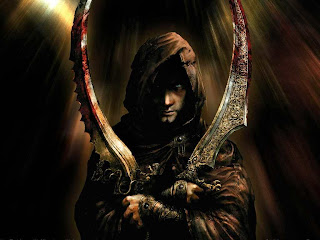 *Salvatore has sometimes been criticized for making too many references to prior novels (flashbacks, reminiscing, what-not) but this actually made jumping back into the middle of the series from where I left off 13 years ago a breeze.
Posted by Doctor Futurity at 7:00 AM