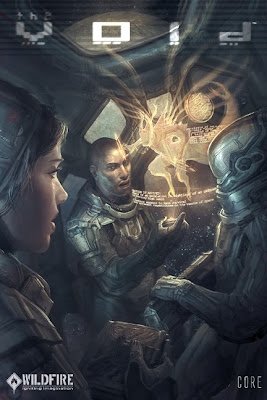 I ordered quite a haul this last week...maybe once I have these books in hand, in the far future I will get a chance to read them...even --gasp!--- play them!

First up I put an order in for Numenera, which from all I have read is sounding increasingly interesting and fresh. There's a serious glut on the market right now for "games that look and feel a lot like D&D," and it's nice to see an RPG out there that might be fantasy yet not a D&D-like.

I attached to that order Fear Itself, a Gumshoe-powered game system with an emphasis on one-shot horror gaming with a high body count. The retailer also had copies of Advanced Recon and I've always wanted to check that game out so I threw it into the basket, too.

Over at rpgnow.com I caved in and picked up Void Core and it's first two expansions. Made by the people behind Cthulhutech, Void Core looks to me like the game I wanted Cthulhutech to be--a quasi hard SF Cthulhu Mythos experience. It also looks more robust in terms of game mechanics and design than the last game I picked up with a similar thematic (Maschine Zeit), and since the core rules are entirely free (i.e. pay what you want) it was all I needed to explore the game and decide a physical copy was destined for my collection.

Lastly I have Mythic Adventures for Pathfinder waiting for pick-up, will be checking that out later today. I am uncertain as to whether it's going to be an amazing book full of new larger than life campaign ideas or a gimmick that gets ignored. I'll let you know more once I have it.

All of this is to compensate for not being able to attend GenCon, although a friend and his wife did indeed go there and even picked up two copies of the Ghosts of Dragonspear Castle, one of which they will be sending me. Joy!