The last week or so has been a busy one for PC gaming. A slow summer punctuated by occasional gonzo sales from the online digital retailers has ended, more or less, and we're getting the early arrivals for the looming holiday season. I'll start talking about the big daddy of mayhem and madness, and then the rest over the next few days... 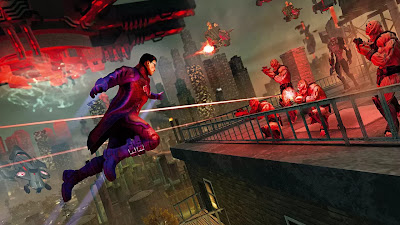 First up is Saint's Row IV, the game in which almost anything goes, and which is also the culmination of a four-game cycle as well as a demonstration on how to start off as a clone of another game and end up as your own unique subgenre before the ride is over. Saint's Row IV is the epic-level content for the series, a game where you start off as president of the United States (after having spent the prior three games having your sociopathic character crawl up the ladder from guttersnipe ganger to gang lord, to criminal mastermind of a very successful marketing empire), and almost immediately aliens invade. You, naturally, proceed to kick serious ass....as the Saint's Row universe is one in which video game physics and realities are implicit, the default norm for SR protagonists is "nearly god like," but before SRIV is over you will have propelled yourself into the realm of super heroics, too.

I've plowed through the first several missions and a bunch of side quests in SRIV so far and the game is up to true form. About the only disappointment is that the core play area of the game is a virtual-reality simulation of Steelport, the city from SR3, which means the sandbox will look quite familiar (though the city has undergone some alien revisions). Despite this, the game is pure gold, and is loaded with new and classic SR-style content.

I figure the gonzo balls-to-the-wall madness of SRIV should be quite satisfying, and hold everyone over who's also waiting for GTAV. I can't decide if I care about GTAV or not. On the one hand it looks like it will tell not one but three interweaving tales of decadent and vile criminals, a subgenre I have been slowly growing to appreciate. On the other hand I disliked most prior GTA titles (except for Vice City). I don't know....SRIV is hard to beat in the realm of "open city crime sandbox games."