So first, for Tunnels & Trolls fans it looks like Ken St. Andre and crew are going to collaborate on a Deluxe Edition of Tunnels & Trolls. There's more about it here on Trollhalla's Outer Sanctum and the Lone Delver also speaks on the matter in detail.

I'd like to see a Deluxe super edition of T&T and the fact that it's going to include collaborative work from Rick Loomis, Steve Crompton, Bear Peters and Liz Danforth along with Ken himself, of course, can only be a good thing. T&T 5th edition has long been regarded as the best (or most organized/well presented) edition of T&T thanks to Liz's work, and I am sure that we'll see the game shape up in the same fashion.

Next! Paizo is having a tenth anniversary sale right here.

I didn't find out about this until after visiting Barnes & Noble, where I purchased the latest Brian Fagan book Elixir, along with Dean King's Skeletons on the Zahara, Paula Guran's Extreme Zombies, Into Africa by Martin Dugard, and Immortality by Stephen Cave. All interesting books which I plan to blast through in the next month, and all helping me to alleviate my conscience from the engorgement on Steam games I engaged in just a couple weeks ago....but luckily this also served as a money sponge to avoid my succumbing to the ridiculous 75% off deals on print products over at Paizo. All of their older pre-PFRPG release OGL modules are up for sale, most at $2-3 apiece and all the adventure paths in stock at $5 each. PDF versions are also marked down across the board. It's madness, I tell you!

Luckily, a dearth of remaining discretionary income and a hearty mental kick to the noggin reminding myself that I never, ever run published modules (except on occasion for C&C) served to quell my insatiable consumerism. If you, however, wouldn't mind getting something around 37 adventure paths and single modules in print for 75% off, head on over. The PDFs of the core book are all $7.49 apiece right now. Kind of a steal, ya know? 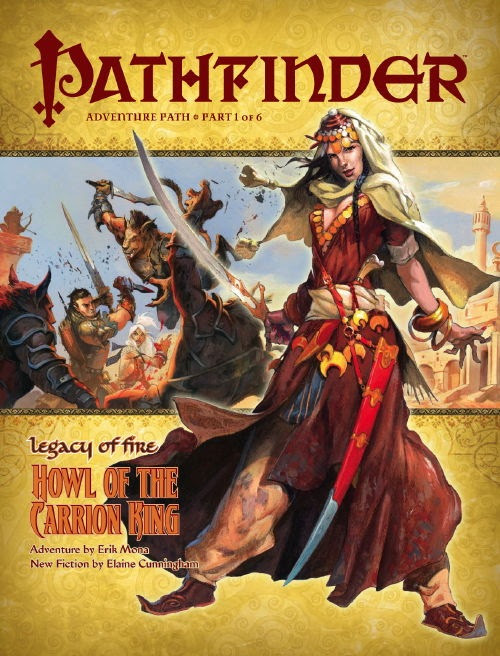 On an unrelated note, I may have given up my chance to own the AD&D Premium edition rulebooks. My FLGS owner called up and inquired as to whether I really wanted them or not, to which I explained as I always do with books they've been holding for a week or more that yes, I do want them, but the problem is I absolutely don't need them so I've been having a hard time finding the discretionary income to throw at vanity ownership. So if she had someone else keen to buy them (she did) then she was welcome to sell them and I'll just take my chances on finding copies in the distant future. Such is life as a father and husband and sole breadwinner in the family right now.

And yeah, I could have saved up the moolah I spent at Barnes & Noble, but those books are something I'm actually going to read and enjoy, maybe learn something from. Buying pristine editions of AD&D 1st edition, simultaneously marvelling at the game I played as a kid and also mildly loathing it for the memories of my youth it brings up....just not quite the same bang for my buck.

I wonder if one's OSR-ness and love for all things 1980 and earlier is inversely proportionate to one's level of fondness for the memories from that period? I'm not saying I don't have fond childhood memories....but I definitely wouldn't repeat my childhood as it unfolded. On the other hand, I continue to hold a pristine boxed set of Runequest 2nd edition, which I do indeed enjoy perusing on occasion for the fond memories, and ironically I also still have my original 1st edition Gamma World books in startlingly good condition, still filled with my writing from age 9-12 when I played Gamma World to death. That there is one of the reasons I don't even feel mildly compelled to try Gamma World 1st edition again; every time I open the pages I see a snapshot of myself in my youth, and it reminds me that those days are unique and are nonrepeatable, at least in their original forms. That's what Mutant Epoch is for, anyway...!

Bah, enough introspection! Go check out Paizo and read what Ken has to say about T&T Deluxe.