Quest for Power: A Post-Apocalyptic Scenario

Back when the new Gamma World came out I worked up a scenario that I was going to use....but as is common, the chance to play never came to pass. I present now the scenario/location for use in Gamma World or pretty much any other suitable post-apocalyptic campaign...w


A Tale in the Ruins of Old Sanaf and Kirkie
Introduction: Emergency in the Village of Bern


The villagers of Bern have come to inhabit the ruins of a large, seemingly resplendent ancient building. The building in question included an amazing store of food, kept in a unique “freezer” powered by an unknown source. Until recently, this reserve was in no way threatened, but unexpectedly the enigmatic power source has gone out.


The village elders (named Moxo, Paz, and Erna) have gathered and asked the PCs to seek out a means of fixing or replacing the power source for the “freezer.” They know of two likely sources: Kirkie is a vast metropolitan ruin and there may be lost tech that can replace the power source; in Old Sanaf there is a known tinkerer called Electro Bill, who is reputed to be extremely savvy with lost tech and might be able to repair or bring the power back on line.


Bern is only ten miles north of Kirkie. The ruins of Kirkie suffer from two primary threats: first, the Great Crater with the ruins of what some call a “Martian” Sky Platform in its center, and second: the legions of the Super Mutant called Noximus ( a serf). Noximus is said to have found a vast cache of lost weapon tech, and he has used this to make his raider gang the most powerful in the region. Kirkie City is his domain, and he lords over what used to be a fairly friendly community to the south.


Old Sanaf suffered less during the Cataclysm, but still has problems. The ruins are thick with overgrowth and rumors of strange plant mutants abound. The technologist named Electro Bill is supposedly now working for the enigmatic order of the Restorationists, and it is believed that he is dwelling in an ancient Vault in the mountains just north of the ruins. Problem is, raiders from Noximus’s army have also been searching for the technologist and his allies for some time now; there is also the problem of the indigenous plant-based mutants, which are notoriously hostile to all beings.


The elders have decided to task the new young heroes with this job. They have opened up the village’s cache and will let the heroes each pick one piece of omegatech from the resources at hand to help them on their journey to save the village’s previously unending food supply.


Bern is described as:


“A fabulous village built inside an ancient structure. It is filled with brightly colored boxes from which the coins of the ancient spill in endless quantitity; these can be smelted and turned in to useful tools. The long cooridors and open spaces of this structure have been turned in to indoor protection for dozens of huts and families, constructed from the many strange boxes and other materials left intact after the Collapse. It is most famous for the so-called “restaurant” in the back which is still in working order and run by a mutant called Cook. The restaurant is connected to a storage unit called the pantry, which in turn provides a unique sort of freezer called a “Stasis Freezer,” in which vast quantities of food can be found. The machine that operates this device has been repeating verbally to Cook that it detects that the “fusion cell” is powering down and either needs to be repaired or replaced.”


GM ONLY: Bern was built inside the ruins of the Star Casino, and the machines within disassembled or smelted down to make construction materials or tools. The actual furnace and smithy is located outside, but the surprisingly intact main structure now provides shelter for an entire town. About nine years ago the open-air section of town inside the old multi-story car garage was lost when the garage collapse. Since then, the villagers (about 200 of them) have lived off of the vast amount of food inside a very long-lived Stasis Freezer, which keeps its contents perfectly preserved (and might even do so to living beings trapped within). The freezer is powered by a cold fusion cell manufactured from the alternate timeline that the casino comes from, and had a 200 year lifespan which is now winding down. A new power source as well as a technologist or mechanic of decent skill (DC 28) can fix it and get the device working again, before it shuts down completely and the food is spoiled.


The Smithy: Run by Chos, a big burly fellow, this is where materials are smelted and cast in to new molds. Chos comes from Phenx and is famous for his learned talent as a smith. He can make real weapons for the PCs if they ask, though he likes trade for services rendered.


Chos: Giant yeti (level 3)
The Cache: Once a bank vault in the casino, this is now where the village omegatech cache is kept. Many items acquired through salvage found inside the building and abroad can be found here, and many of them aren’t even very well understood. It is guarded by an android named Mike.
Mike: android pyrokinetic (level 4)
The Smokes and More: this was once the gift shop, now converted in to a store front for the village and run by the woman Yasna. She’s always looking for new items for trade. She is known for being able to stalk fresh tobacco smokes, made and traded to her by the Westos Trading Guild. Her main contact with the Westos Traders is Tom Orlan, a Badder from somewhere out west.


Yasna: radioactive cockroach (giant spider level 2)
The Glitterhall: this is the largest central area of the casino, where more than three dozen “huts” made from reworked slot machines and tables have been turned in to housing.
The Restaurant: Here is where Cook serves the food he “prepares” from the Stasis Freezer. Villagers eat free, but guests must pay; Cook likes ammo in trade for food best; he has quite a collection of arms in his private room.


Cook: seismic elektrokinetic mutant (Level 3)
Hall Watch: the old security room has been turned in to a makeshift office and is used by the android cockroach swarm named Moxo as the constabulary headquarters. The security cams still work, and he uses them to monitor the village, though he suspects they too will go off, once the “fusion core” expires.


Traveling outside of Bern is always risky. The following represents a sampling of the threats that might be encountered (typically encounters happen on a 5 or less on a D20 once per hours of travel in the region 10 miles around Bern): 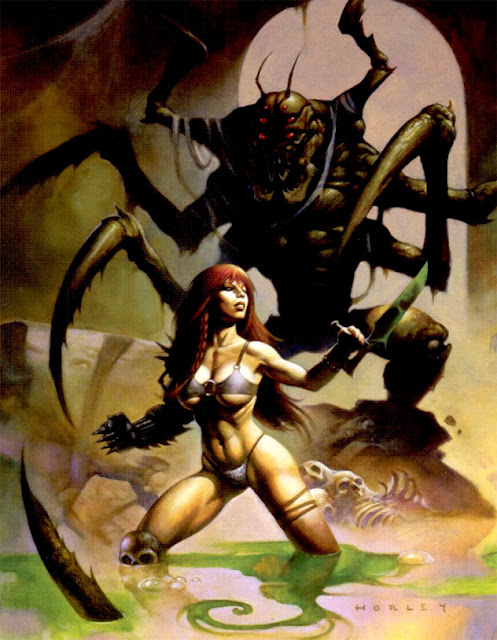 Posted by Doctor Futurity at 6:02 AM