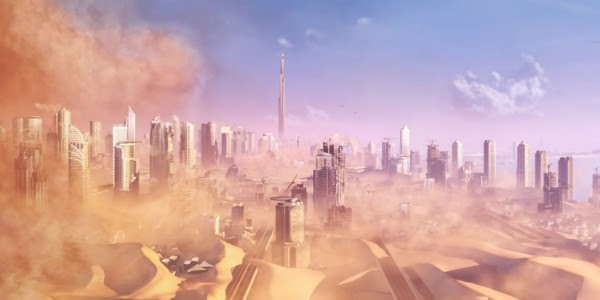 Well, seems I can't quite stop writing about Spec Ops: The Line. Extra Credits posted up their spoilerific Part II to the discussion of this game and it had some interesting bits I hadn't realized in play (as well as a few bits I am in disagreement with). Go check out the video first right here (make sure you've played the game first, though) and then read on...

First off, as they pointed out in the video, you really do find yourself going downward, constantly, throughout the game....and when you think you've hit bottom you find yourself up high again, once more about to descend I felt this was an allegory for a sort of Dante-like descent reference, and supported the notion that we're experiencing Captain Walker's purgatory.

That said, I am surprised (and bemused) that I didn't try some of the bits they suggested in some of the moral choice scenes....and also perplexed that one option didn't work for me. Specifically, when confronted with the angry civilians I did try to force my way through the crowd, but to no avail. It did not occur to me to fire into the air....sort of wish I had tried now.

Second, when faced with the scene where you must choose between killing a soldier and a civilian while trained snipers wait for your decision, I did in fact try to shoot it out with the snipers. I must not be as good at this game as the Extra Credits guys, because I repeatedly got wasted when trying this. In the end, I settled for shooting the soldier (more culpability in his actions and responsibilities, I reasoned) and of course much, much later on when Walker is confronted with the truth about Col. Konrad a flashback reveals his memory of this scene....that in fact there was never a trap, or two men facing execution by Walker's hands, just two corpses long since executed. So....hmmm.

Another theory I have is that the Extra Credits crew are professional game designers, by and large....or at least, they're more closely involved in the design of video games than I am. As a result, when they are playing Spec Ops they are thinking, "What did the designers account for? What are my limits in this scene?" and as a result they push and prod and pull to see what they can get away with. I, however, am nowhere close to being a computer game designer, instead being very much a player. As a result, I come to these events in the game with a different perspective conditioned by years of play, asking, "What did the designers intend for me to do here? I've been killed by snipers ten times in a row...perhaps I really am not able to defeat them, and instead need to pick a hapless victim to kill; the designers intended for me to see Walker's fatalism as he plays into Konrad's game...that must be it." And so I played along, never realizing it was never just two choices.

Interestingly, while the game does provide a lot of narrative (chiefly in load screens) with dialogue that I personally felt was referencing Walker's state of mind (i.e. the cognitive dissonance being a reference to the moment he snaps when he realizes he not only killed a lot of the 33rd Batallion but evacuating civilians as well) ....I was very surprised to see that Extra Credits interprets this dialogue as being aimed at the player, with the intent of making the player uncomfortable at the dichotomy of "playing a shooter game for fun" and "this game is not fun." Interesting interpretation....and yet....I still can't quite buy into it. Does no one in video game land read or experience fiction that contains a disturbing or uncomfortable narrative? Is the idea that one can enjoy an otherwise disturbing and ethically ambiguous tale about war somehow not normal? I suppose maybe there really is a larger crowd out there for which this experience is novel....but for myself, I tend to demand this sort of thing, expect it, and was pleased to find in a game, a place you typically don't find uncomfortable or disturbing narratives (except maybe in Silent Hill). So perhaps that is why I simply didn't notice this....it's not so easy to feel the cognitive dissonance (I am enjoying this/I am not enjoying this or shouldn't be enjoying this) when you find that discomfort enjoyable on some level, or reasonable in the context the game offers.

Okay....enough of Spec Ops: The Line. Gotta stop talking about it before I try playing the game again. I admit, it's tempting....if only to push the limit on those moments where, apparently, there were more options than I realized. A second play-through might be comparable to, say, watching The Sixth Sense a second time to see if it all holds up to the reveal at the end of the first viewing....or Fight Club, another great example of films that touch upon the same literary hat tricks that I think Spec Ops: The Line is trying to pull from. 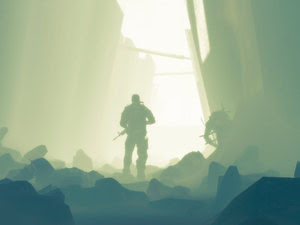 Posted by Doctor Futurity at 12:32 AM