Spec Ops: The Line - War as Horror and Madness

I said I'd eventually get back to talking more about Spec Ops: The Line once I got a chance to play through it, and as I have now finished the campaign (on what is arguably the "happy" ending) I thought I'd do a  review/discussion. I'll talk spoiler-free parts first, then announce the spoiler-laden part afterwards.

First off, this game is effectively a tribute to the genre of war films that seek to portray war and conflict in general at its worst, the sort of military engagements that fly off the rails and descend into madness. This is the first game so far as I am aware to try this; it's taking a cue from Apocalypse Now, Hamburger Hill, Full Metal Jacket and other films which seek to portray war in as grimly realistic and shocking a light as possible. It's especially poignant in terms of how the Vietnam War has often been viewed, as Spec Ops: The Line seeks to present an unusual scenario where there is no good guy, no clear enemy, and a mass of confusion as to precisely what is going down. It uses this confusion to great effect to weave together a plot that only at the end starts to make any real sense.

As a video game it's a solid shooter with a compelling story. It's a rare blend of military shooters and the horror genre; one who enjoys Silent Hill or Amnesia is, ironically, about as likely to enjoy this game as any Call of Duty or Battlefield fans will. In fact, it is probably a safe assumption that the fan of horror games may enjoy SOtL more than the military shooter fans simply because that visceral level of enjoyment one gets from the horror genre is going to be a necessary requisite to really appreciate this game; if you're fondest memory of playing CoD is your TDK count and how much fun Nuketown is....Spec Ops might just drive you up the wall with its grim presentation.

The spoiler free summary of Spec Ops is like this: you control Captain Walker and his two allies, Adams and Lugo, sent to Dubai sometime after a calamitous disaster in which a great sandstorm engulfs the opulent city, and the entire city...skyscrapers and all....become entombed in the dunes. This is such an amazing disaster that it seems almost surreal (and for good reason, I later decided). As the three investigate, it becomes apparent something strange is going on. You're looking for American soldiers from the 33rd Batallion sent into to aid in the evactuation of civilians, and after the storm became too dangerous everyone fled, except for the 33rd. Walker and his two men are here to find out what happened.

At least, that's how it starts. Before too long you're dealing with rogue American soldiers, a CIA plot, hapless citizens trying to survive amidst all of this, and what appears to be a madman, Col. Konrad (not Conrad!) who has somehow gone rogue or traitor. A great deal of third-person cover-based shooting ensues.

Without spoiling any more than that, the game is worth playing if you like a meaningful story. It is probably the first time in a long while I've played a shooter like this where I was more interested in the story than the mechanics...and the mechanics, while solid, occasionally cause problems (as all third person shooters do in which one can accidentally get stuck to cover or do the wrong thing with the press of an incorrect button). I often died, and had to restart, to the point where the game would nag me to go to a lower difficulty level. I persevered, however, determined to finish it without defecting to an easy mode.

There is one complaint I can make: it has a multiplayer component and a co-op sort of  "spec ops" mode. They seem tacked on.....or at least, I suspect they are, because finding live players to play against is impossible (in the PC edition, at least). I have spent some time queued up to no avail. No worries for me, though. The meat of this game is in single player, and I have plenty of other multiplayer games in the buffet to sample from.

Although, having said that, if you interpret the multiplayer component as a representation of the madness of Dubai after the 33rd settles in....well, I doubt it really does that. Somebody had to be busy massacring civilians, hanging people all over the city, and I suspect that the multiplayer component doesn't really go into any of that. Nope; I'm pretty sure the multiplayer is here because someone in marketing said, "military shooters need multiplayer," and so the developer was required to meet this minimum standard. 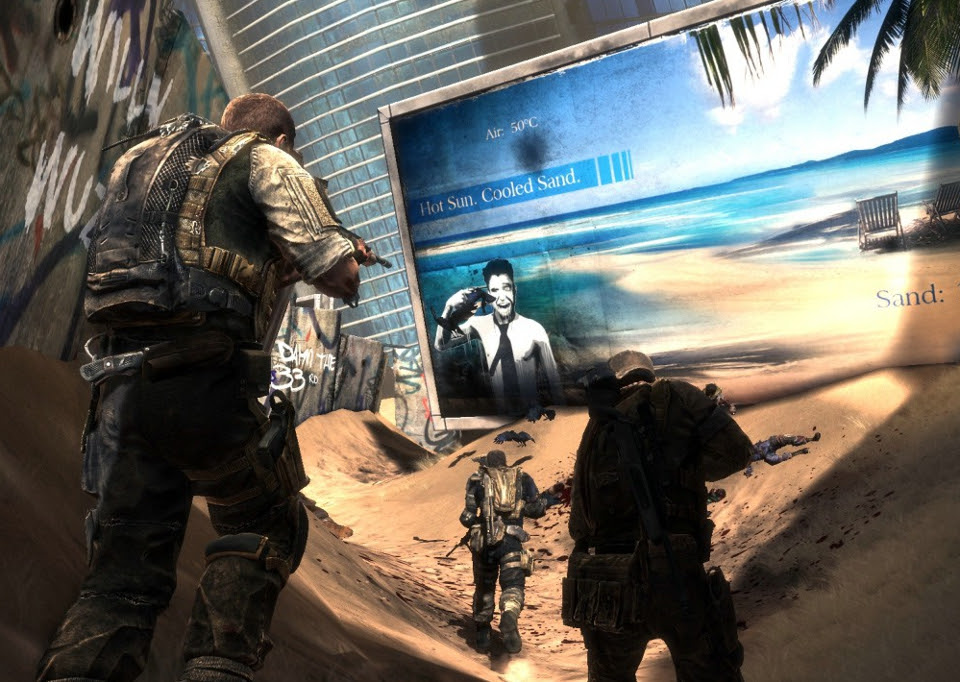 From here on out there Be Spoilers!!!!

What Spec Ops The Line was trying to do, according to the original author (or so Wikipedia says) was to provide for an open interpretation of its story and message, but that he personally felt the game was a portrayal of Captain Walker's own personal purgatory. I like this interpretation because I myself thought it made sense (especially after the bloody sand "tower" hallucination scene) and thought of it around that point. This feels like Walker is paying very much for something, and some nepharite somewhere is pulling his strings. (Kult reference). In fact I'd say that Konrad himself was probably that Nepharite. But enough referencing esoteric horror RPGs....there's more than one way to interpret this game's tale.

What I find really interesting is that the guys at Extra Credits along with Tom Bissell and some other game writers and journalists in the industry have all taken it on themselves to interpret SOtL as a criticism of of the military shooter as a genre, by simultaneously empowering the player with all the tools one expects of such a game, yet using the story to show the consequences of the player's actions. This seems like a plausible but flawed premise; for one thing, if you play through it, you may notice (as I did) that there are several problems with assuming the game is really a critique of that genre or even you, as a player in that genre. Specifically:

You lack real agency in the story. You are most definitely experiencing the tale of Capt. Walker, albeit one filtered through his unstable mind. The very first time you get a hint of something being "wrong" with the protagonist it's just strange enough that for a second I thought the game was glitching on me. Gradually it gets more obvious that something is up, but the truth is, when you get to a difficult moral decision, you are never given a chance to do something "right" by any standard (until the very, very end, anyway). Each and every unpleasant decision is made with a measure of certainty, something Walker endorses, essentially. As such, what we're really experiencing is the sort of man, and the sort of mind, that comes out of the meat-grinder level of violence one experiences in this genre. So in that sense, it most definitely is deconstructionist, but not in a "game blames the player for enjoying it" sort of way.

No, I'd call it more of a, "We know not all of you play military shooters because you seek empowerment through violence in video games. Some of you want a real story, which deals with the realities of what's happening in the game. Some of you want to walk in another man's shoes....even if that man is very, very bad." It's the dark side of escapism.

Given that it became evident that this was a tale about a protagonist who was not a good guy, even if he thought he was, I found that I most definitely did enjoy it. I applaud those who feel horrible after being forced to choose between saving Cooper and civilians (only to have Cooper die anyway), or those of you appalled at the fact that Walker didn't hesitate to use the white phosphorous (as in, we had no choice other than to consent to his madness). And for the record, while I am firmly anti-war in Real Life and in fact feel that its abandonment as a weapon is necessary (and find the distinction between humane and inhumane weapons to be sort of missing the point of true disarmament), the truth is: in the context of the game it's use against such a seemingly overwhelming force was portrayed as necessary....in Walker's eyes. So the game does a fine job of getting you to see the rationalization of need that Walker has already reached. If you project too much of yourself into the game's character, then I could see how it might be disturbing. For myself....I tend to look at this sort of experience as more of a ride in someone else's nightmares, so I found it less disturbing and more intriguing to see how Walker and the others dealt with the choice...especially once they realized the unintended consequences.

I mean, what other choice did they have? There before them was the enemy, the 33rd Batallion, and there next to them was a quick and dirty way of annihilating a majority of their enemy. Presumably there was no way around the enemy...and after they had been shot at for half the day, it seemed like walking down and talking to them wasn't really an option, right? A truly sane man might have backed up and moved away....sought out some other route. Or even, you know, evacuated the city on foot and tried to go for help. But this is Walker; he wasn't just there to investigate the matter and then bug out. He was there to confront his old pal Konrad, no matter what it took.

Anyway, I could keep going on about the interesting bits in this game, but it's really better to experience it for yourself. Likewise, I could keep speculating about possible meanings to it, but I really like the author's personal interpretation the best, it fits so well. With any luck, Spec Ops: The Line will do well enough that we see more like it in the future. There aren't enough grizzly, realistic "war is hell" games out there, and it's nice to play something that hadn't scrubbed itself of all the unsightly bits. CoD doesn't even hold a candle with its "No Russian" level or its gas-warfare cuts scenes--seriously; those are quaint little "shock value" efforts compared to what Spec Ops accomplishes. Hell, you could get through that CoD level without firing a shot at the civilians. Not here.

You know what, though? This is why the multiplayer was a bad idea in Spec Ops: The Line. When all is said and done, I appreciated what this game delivered....but I don't want to keep doing it, over and over and over. I think I'll stick to Call of Duty for my military shooter multiplayer; it's just a bit cleaner and doesn't remind me of anything..well...bad.
Posted by Doctor Futurity at 6:00 AM