Aerinos is captain of the guard for the city watch, the distinct militia company assigned to the protection and oversight of Thelaed. His men also serve as first-watch against pirates, and man two small war galleys for the protection of trade lanes. He is a stressed man, but believes in his job, and is not above recruiting foreigners to investigate or handle issues involving other foreigners or demihumans.


2. Talia Ezistaer, alias “The Witch of the Black Woods”


Talia is a practicing witch, who dwells in the woods west of the city in an undisclosed location. She is regarded with suspicion by most, although she hides her reputation as the “Witch of the Black Woods” from all; certain people who are desperate will seek her out for help, if they feel sorcery will aid them, but she is very careful about those who approach her. She is protected by a large cylops named Edaeos.


Morigon is a tall, gruff man who is of the Dranae tribe, exiled from his homeland of Ekarthask. He now manages a vineyard and winery and exports a great deal of wine on his three trading vessels to regions all along the eastern coastlands. He is good natured and friendly to foreigners, being one himself.


Alden the Sly is the leader of a local guild of thieves called the Shanksters, who are fond o casing wealthy houses, managing a union of beggars, and running all sorts of illicit operations along the waterfront. He works with (though does not believe in) cultists of the Eleven, getting them and their vile goods in and out of the city. He has a shantytown of sorts south along the coast in the swamps called Shankstertown.


Silas Kaer is a priest of Pallath Eridanos who also has an obsession with the mysterious Preservationists of the White Desert, and he will pay handsomely for any books or lore from their order, though such is forbidden in the city proper, due to their advocacy of sorcery. Silas is well-intended, and believes that the Preservationists reflect another extension of the truth and mystery of his own god.


Sheligan and his wife Nemari are two local land owners and community members who are respected by all. Lately, their fields and livestock have been raided by unknown forces from the mountains, and they are looking for help in stopping this. Evidence so far suggests a mixture of goblins and cyclopses.


Tenithos is a traveling bard and good-natured fellow. He has an innate skill for lyrical magic, which he hides, relying on theatrics instead to disguise any potential revelation of his talent. Tenithos has an ear to the ground for interesting events and keeps an eye on people around Thelaed. He makes an annual pilgrimage to several other cities, and even to Nuliria, so he is rather worldly.


Chaspar is officially a member of the council, and privately a respected tradesman. In secret he is a wizard, and has practiced his art for decades, since he was indoctrinated in to the Order of Ahael, founded centuries ago by a dissident priest of the temple of Eridanos who felt that the suppression and rejection of sorcery was the wrong way to go. This secretive order has about two dozen members locally. Chaspar is its most respected member, and uses his council influence to work toward better rights for those with natural and inspired talents for sorcery.


Karida began her life as a slave, and gradually clawed her way to freedom and then eventually got lucky and married a wealthy businessman, who subsequently gave her a small fortune in wealth and property. She now manages one of the more prestigious bath houses and brothels in the city, and is a central socialite in the ongoing charades that the young members of the gentry engage in. At thirty Karida is believed to be the second most powerful woman in Thelaed after the general’s wife, the high priestess Aetra.


Laeon Aetra has a poltical marriage to general Tiraeus, and is herself a powerful influence on the community. She is publically the voice and oracle of Pallath Eridanos, which means she is supposedly visited by him in her dreams and considered his spiritual wife. Privately, she is suspected by all to be his heir apparent, and the priesthood feel she is manifesting traits characteristic of the living gods in Nuliria, which worries some, for there is a strong disdain for those so-called false cults in foreign lands. The high priestess herself seems unconcerned with these beliefs, and embraced whatever her powers offer her as she continues to expand her divine talents.


Anton Tiraeus is the appointed general-regent, selected by vote two years ago to act as Theliad’s political and military defender against outside influences. He has so far proven to be a charismatic figure and reliable; he has personally led a raid against the Akarthaskan warlord Geminos, destroying the enemy’s fleet and setting fire to their harbor in retaliation for several raids by the warlord’s troops.


Darius Esaen is a favored knight who has served for a decade as a champion of Thelaed. In his mid thirties, Darius has traveled across the region and gone as far as the White City itself and back. His tales are legendary, his stories of slaying sorcerers and slaughtering demons quite spectacular. Some think he boasts, but others know the truth of it. Secretly, Darius is obsessed with Talia Ezistaer, the witch of the black woods. 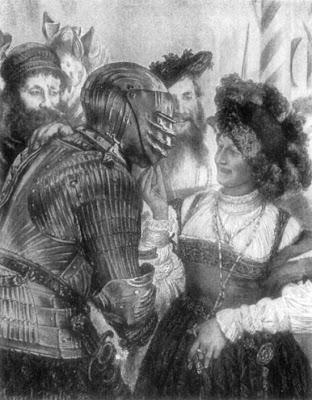