Tales of the Cannaded Dei: The People of Sabiri 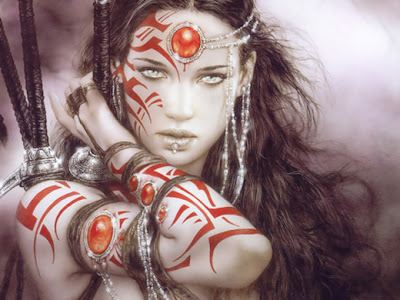 The People of Sabiri
There are three major population groups of humans in the region of Sabiri. The first group, after which the land is named, is the Sabiri proper. The second and third groups are derived from migrant and colonial populations that come from Grelmaine and Espanea.

Sabiri People
The people of Sabiri are a unique offshoot of humanity that some scholars suggest are direct descendants of the Inadasir empire of old. As a people, Sabiri are unique in appearance, looking physically human but with distinct skin tones ranging from grey to chalk white. Although Sabiri seem to lack pigmentation common in other human racial groups they do not suffer from suburns and are most definitely not albinos. Almost all Sabiri have lustrous black hair and only a few have auburn or red hair; no one has ever seen a blonde Sabiri that wasn’t of mixed lineage. Their eyes tend to be steely grey and blue, but some women of sorcerous talent are born with compelling green eyes. Sabiri men who follow the ways of Vargre develop bright red and orange eye coloration.

The Gordoska
Not all Sabiri are natives. In the last two centuries there have been efforts by the Grelmanics and Espaneans at colonizing the region. The people of Grelmaine long ago lost interest in what seemed to be a valueless landscape, but many coastal towns and a few inland communities can be found in the western region of Sabiri, where stout descendants of prior Grelmanic incursions eventually settled. These people call themselves Gordoska, after the Grelmanic word for “isolation.” The Gordoska take great pride in their meager lands and way of living, and are on generally friendly terms with the Sabiri people.
Most Gordoskans retain the blonde and blue-eyed looks of their Grelmanic heritage, but an openness to the Sabiri has led to an influx in mixed-heritage children. After several generations, this has led to the largest population of chalk-skinned, blonde haired people in the region. Most Gordoskan half-breeds come from situations in which a Gordoskan man takes a Sabiri wife, usually in purchase from a Sabiri tribesman who has one too many, or perhaps a daughter deemed too sickly or weak to be marriageable to another Sabiri. Such women are sold for goods and valuables to Gordoskan men looking for the thrill of an exotic wife, and the beauty of the Sabiri women is quite famous in Grelmaine.
Unfortunately Gordoskans are not the only Grelmanics to encroach on Sabiri lands. There are many slavers from this kingdom who seek to capture young Sabiri as well as the women to be sold in to slavery. Grelmanic law only proscribes citizenship and basic human rights to landed gentry in their own lands, and they view non-Grelmanics as having few or no rights. As such, trade in Sabiri flesh is a popular if dangerous pastime, for the Sabiri are so difficult to capture. They almost never take Sabiri men, who will fight to the death and are notoriously difficult to break in captivity.

Espanean Colonials
About two centuries ago the first efforts at colonization of the Sabiri lands from Espanea were undertaken by an entrepreneurial governor named Lucas Fartheren. The long and tragic tale of Espanean conflict in Sabiri will be elaborated on later, but needless to say the Sabiri did not take kindly to foreigners from across the sea arriving and trying to enforce rulership over the landless natives.
The Espanean colonial efforts were eventually deemed a failure, and the effort abandoned, but not before a fair number of would-be entrepreneurs and colonists had established themselves on Sabiri shores. In the end, the port of Westgate remained a viable city, serving as the center of trade between the distant kingdoms of the West and the land-locked nations of the Sea of Chirak.
Deep inland along a natural reservoir stands Fartheren, named after its long-dead founder. Built atop the site of one of the ruins of the old kingdoms that preceded (and were destroyed by) the Sabiri nomads, Fartheren has become a hub of activity and one of several centralized gathering points for the nomads, where they can assemble to engage in seasonal trade and ritual activities. Fartheren has also become a center of religious activity for several regional cults, especially the nebulous fire cult of Vargre.
Espaneans from these two cities are a hardy lot, descended from the pioneers who believed in governor Fartheren’s vision of an expansive Espanean Empire and those who came after. While some Espaneans have intermarried with the Sabiri and created distinct mixed ancestry in their kin, most surprisingly have not. The local Espaneans remain a largely cooperative but otherwise insular society in the region, developing their own local customs and mannerisms that work with their neighbors without giving up any of their own cultural identity.
Nonhumans in the Sabiri Lands
There are as many nonhumans in the region as there are humans, some believe. It is certainly known that many orc tribes roam the lands as nomads, and that some centaurs and other demihumans can be found in the more remote regions of Sabiri. Although few elves are ever seen here, the Zamedian elves in the north around Madagar are most likely to be encountered in this region. A few races are completely absent from the region, found only as travelers passing through, including the smaller folk such as halfings, gnomes, goblins as well as larger monstrous kin such as minotaurs. It is believed that there were once a great race of local minotaurs with bison-like heads, but in various local tales it is believed that they were all slain by the last of their kind, the dreaded demiurge Kobal.

Ghuzdar’Shadoan Orcs
The orcs of Sabiri are almost universally descended from the orcish tribes of the Kossarit Mountains. There are about two dozen known orc tribes, with such colorful tribal names as the Black Riders and the Storm Vipers. These orcs appear to have adopted their own identity from those of the mountains, and call themselves the Ghuzdar’Shadoan, which roughly translates in to the “War Riders of the Dark One,” the Dark One in that sentence being Shaligon.
The Ghuzdar’Shadoan are friendly to none, although it is known they will on occasion trade amongst themselves or with the Helians in the south. A few of the orc tribes have taken goods and coin from Arcanists, members of whom have a strange interest in the fallen civilization from six centuries earlier.
Physically these orcs look similar to the rest of their kind, but with slightly shorter builds to better accommodate riding horseback. Ghuzdar’Shadoan orcs hold a deep reverence for their horses, and appear to worship a dark spirit-lord which they call Gazdanak. Some have observed that this may be the same horse-spirit that the Hoagarit worship, across the Sea of Chirak along its eastern shores. This belief extends to a strange sort of animism, in which the orcs revere a variety of animal spirits, which they believe are in turn different aspects of their creator goddess, Shaligon.

Zamedian Elves
The Zamedians are an expansive tribe, with small groups ranging from the northlands of Madagar and even in to Crystite, all the way south to the edge of Helios. Though they can be found throughout this region, they number fewer than five thousand, with most Zamedians dwelling in small groups of twenty to forty members.
The Zamedians are not by nature nomads, but often live as such, migrating from one location to another, seeking out the same sacred spots where they will then settle for a few years before picking up again and moving on. Zamedians prefer to settle down whenever possible as they engage in a modest form of agriculture. They are also pastoral herders, and raise the butu, hardy goats native to the region.
They have a generally friendly relationship with the Sabiri, who see the Zamedians as a spirit race, something beyond mortal understanding. They also fear the Zamedians somewhat, for more than a few campfire tales of the Sabiri revolve around the passionate justice Zamedians are known for, as well as the terror a fallen Zamedian can cause when he or she returns as one of the undying.
Like many elvish tribes, the Zamedians have lost much of their old lore, though they have a rich heritage of local tales that go back at least one thousand years. They worship a variety of animal spirits, which they claim are local spirits who roam the Sabiri lands freely, and that the entire region is very close to the Spirit Lands. They revere no gods, and see the Sabiri demiurge Kobal as a blight upon the land and a cruel, genocidal killer of his own kind. Among the Zamedian tales is the implication that their ancestors were a part of the old kingdom that dominated the region, and that it was Kobal who was responsible for its downfall. The Arcanists and other scholars who have studied the region tend to believe there is more than a little truth to this, for ruins in the region clearly have a mixture of human and elvish influence.

Scarabanish Centaurs
The Scarabanish are actually centaurs from the vast deserts of Helios who migrated northward over time and began to war with the Sabiri nomads, Ghuzdar’Shadoan and other natives in Sabiri. The Scarabanish are very warlike, and their culture is distinctly different from the more pacifistic centaurs to the east near the Everdread Desert.
Stories suggest that the Scarabanish began their migration many centuries ago in distant Zann, where they were at last driven out by the local kingdoms. They migrated to Helios, where many centuries of warfare and conflict led them at last to being pushed out in the Sabiri. The Scarabanish have been here now for at least a century, and have proven a bane to all natives.
Physically Scarabanish are like most centaurs, although they hold smaller equine bodies and human torsos to match, closer almost in size to ponies. This stunted size does not make them any less formidable, however, as they are extremely aggressive and rarely interested in talk.
Player characters might find an opportunity to play a Scarabanish centaur that has been cast out from his own tribe due to some humiliating action, such as stealing another man’s wife, or slaying a rival caught unawares. Scarabanish prefer to cast out criminals and rejects rather than kill them; they prefer to keep their strength for killing the “two feets.” 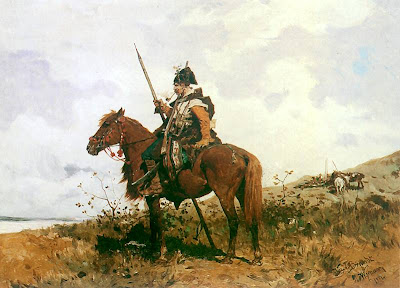 Next: Geography of Sabiri