The Free To Play Conundrum

I just received an ad email letting me know that Star Trek Online had gone free to play and that it would very much like to see me come on back. In recent months I have received the same ads for many other games including Age of Conan, Fallen Earth, Everquest I and II, DC Universe Online, the Aion announcement that it will soon go F2P and many more. I kicked off last year with Chapions Online going F2P and pretty much spent most of February 2011 playing the hell out of that game (which I'd love to get back to some day but all these single player experiences kept clogging the pipes last year in my mad and futile dash to play All The Games before Marcus was born).

Anyway, when I received the notice about STO's F2P announcement (gotta love the truncated terminology of the MMO experience) I realized that in the long term, F2P has got to have a saturation point, one at which the value of a F2P game, no matter how cool and AAA a title it might be, is going to bump into the problem that it's only likely source of meaningful income is the dedicated and foolish consumer with money to burn on highly transient ephemera.

Now, one could argue that all gamers by definition are consumers of highly transient ephemera (at least in the realm of computer games) and that spending cash on a F2P game is no different than chucking $15/month on a pay to play experience like WoW, Rift or Star Wars: The Old Republic (are there any other P2P games left other than those three, anyway?) However, the truth is that in the end, ownership is a powerful tool, and I am really interested in seeing how the concept of ownership plays out in the F2P market.

To compare my own experiences: I played WoW from around February 2005 and subscribed for about 16 months straight before taking my first prolongued WoW break, after which my subscription pattern boiled down to, "subscribe for a few months after each new expansion arrives, or until the sight of Stormwind or Orgrimmar causes physical pain." Although I subscribed to and played many other MMOs after this point (noting that my acquisition of WoW was preceded immediately by my defection from Mac to a real PC that could actually play games), few held me for more than three months before I felt sated for the content offered. Ultimately I lacked the OCD or addictive personality necessary to stay with an MMO for the prolonged period it demanded. I have also found online social networks, another massively compelling feature of MMOs, to be lacking, so finding a big friendly guild was still not an incentive for me.

Okay, digressions aside, the first F2P game I dedicated myself to was Dungeons & Dragons Online (alias Eberron Unlimited). I was part of it when the game first released as a P2P model back in 2006, with a dearth of content, a grind singularly painful and an experience that was at once promising of a vastly more involved and complicated experience for an MMO type game while still being almost impenetrable to a single-player-hardcore, multiplayer-casual type gamer like me who enjoyed multiplayer elements mostly for the ambience and never for the actual pleasure of it all. Or in other words, I played DDO on and off with a great deal of frustration until early 2010 when I decided to give it another shot as a F2P experience, with a thought of "nothing ventured, nothing gained," about the matter.

Ultimately DDO grabbed me and held me thanks to some key improvements and changes in the gameplay experience that made it a fun package for the F2P player, and also made it more fun for the "single, with occasional rare group" style of gamer I was. It's still not perfect, and there are dungeons in DDO I can't hit without a group, which I always resent in this sort of game because, you know, if they want me and my "hardcore single player, casual multiplayer" ass to play the game then they might as well offer me some way to tackle that raid content that demands whole groups of live players (a "buy this dungeon in single player + bots" feature would earn my cash, for example). So DDO hasn't fixed that part entirely, but luckily a large chunk of the game is manageable for me.

Um....so anyway, with DDO free to play I realized that I could, if I wanted to, buy into the game, purchase its various scenario packs and expansions, character slots and so forth, and effectively "own" the whole of the game. I calculated out how much it would cost to buy everything I wanted, determined that if I played the game for ten months I would spend $150 in subscription costs anyway, so if I capped my spending at that amount, bought everything (timed for their sale events with 20% off discounts) and then got at least ten months' worth of game time out of it that I would basically come out ahead of the subscription model, all while effectively coming as close to ownership on a F2P online game as I could, at least until they turn the servers off one day far down the road.

As it turned out, this was a great idea: I have spent more than the $150 I originally alotted on DDO since then, but it was primarily upkeep (and for a short stint I was hooked on bonus XP potions) and occasional "gold seal" henchmen. I have purchased the additional races, classes and scenarios since released, which they admittedly keep up often enough to continue to get some money from me. Overall though the experience was such that I payed the equivalent of maybe 18 months' worth of subscription fees, but I garnered two+ years worth of play time out of DDO to date, and can continue to log in and and ejoy all of the game content I purchased into perpetuity without spending another dime (or again, the Heat Death of the Universe equivalent in the MMO-verse: server shut down--RIP Tabula Rasa).

I did the same thing (more or less) for Champions Online when it came out as F2P last year, with one caveat: I bought all the content I wanted within the first week it went F2P, and I did so with their super-deluxe one time sale. Champions Online offered a lot of superfluous content, as well; costumes and other cosmetics that frankly didn't interest me much, but nonetheless which I did buy particulars of, along with the remarkably cheap scenario packs and character builds (that are not so cheap if no sale is going on). In fact, it was a great deal then, but I never would have bothered if I hadn't caught the game on sale; since then, the core prices have been fairly fixed (I may have missed some holiday sales, though) and as a result, have been a huge deterrent, especially since unlike DDO I haven't gotten more than a few months' worth of play time out of Champions Online; my staying power hasn't been as great, and it's not as competitive for my time as the many other games I had been playing last year.

So then Age of Conan and many others all flooded through the gates of the F2P circus this year. Age of Conan was especially disappointing, as the prices set for items in the store demonstrated that Funcom didn't actually want you to buy their stuff (or at least, they didn't want people who value their hard earned money and have common sense to buy it), such that it was clear that subscribing was still a better way to play. On top of that they massively overpriced the new expansion content. I love Howard's Conan, but I don't love Age of Conan enough to spend hundreds of dollars on a game that I know has issues after level 22. Maybe if I knew all that money would go to actually finishing the voice overs and later dearth of content in the game (between levels 50-75 or so), I might consider it; but Age of Conan, like DDO, needs a lot more polish. I know Turbine got its act together and turned DDO into a good game, but I really don't trust Funcom to do the same.

So now, today, I see a sea of F2P games, and realize that while I might at some point download all of them on my PC, probably none of them are going to get my money, unless I find something absolutely, unbelievably compelling about the way they handle the F2P experience such that I feel compelled to give them my money (and get a good return). None of the F2P games out there now seem to be in the least bit concerned about the idea that F2P players like me will give them money for unlocked content if they make the return worth my while; they are all seemingly obsessed with the idea that F2P players are a painful aberration, like giant pinatas that when beaten shower down cash, if you can just hit them hard enough. Games like Age of Conan clearly think that they can use F2P as a way of conning you into subbing, and if you don't sub, then they figure maybe they can get money out of you equivalent to a lifetime subscription, if they just truss it up enough in shiny lipstick and make their dollar to funpoint to product relations obscure enough to scare away the "math is terrifying" types. Uuuugh.

There's also a new problem for MMOs on the horizon that I predict will have a major impact: Bioware popped out Star Wars: The Old Republic at last and demonstrated that it is perfectly feasible to do an MMO with an elaborate multi-pathing storyline that is at once filled with emotion, difficult decisions, role playing, voice overs and not a goddamn Kill Ten Rats quest in sight (or at least, showed how you can actually integrate such quests into the general flow of things without ever making it obvious or annoying; never have I seen a game handle "grind quests" so smoothly and efficiently that you don't even realize you're doing them until they're done). SWTOR has set the bar very high for the next generation of MMOs, and I don't think I'll ever be able to stomach paying (or not paying) to play a game that at any point obviously has me collecting ten dead rat bodies.

(I really, really wish that Bioware had gotten ahold of the Conan property and made Age of Conan now.)

Okay, that was a lot of text to basically say, "I will continue to play DDO and Champions Online at my liesure because they beat the rest of you F2Pers to market and made me an offer I couldn't refuse; and I am subscribing to Star Wars: The Old Republic for the next year, so suck it, Funcom." When all MMOs are F2P, no MMO is free....but as a consumer, faced with a nigh infinite number of choices for hooking me with the free h'orderves then hitting me with a major bill for the entree, I choose instead to eat at home.

Basically I guess that is the moral of my raving coluimn for the day! 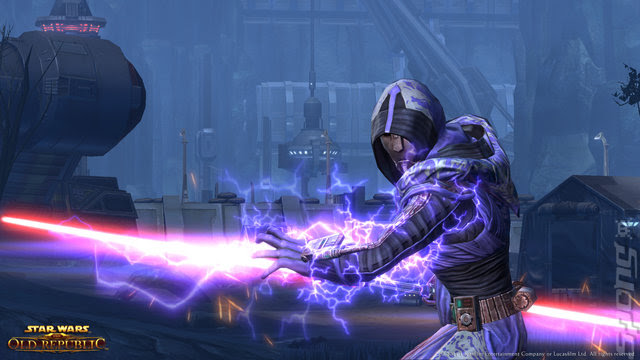