Tales of the Cannadad Dei: Arms and Armor of the Sabiri 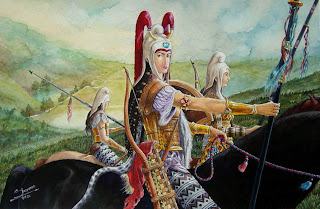 
It is not typical for nomadic cultures to have sophisticated steel weapons, but the Sabiri are surprisingly adept at metallurgy. Certain cultural “hot spots” like Uvalin and Zen Hettar support this trade and because of this Sabiri steel is a prized commodity.

Sabiri are fascinated by the construction of long-lasting weapons that are useful in mounted combat. Sabres, falchions, scimitars and other one-handed slashing blades designed for use from horseback are regarded as favored melee weapons. The women of the Sabiri have developed sophisticated knife and dagger practices apart from the men, though women on the path of Hnaka are as proficient with sabre or scimitar as as male.

Aside from close combat weapons, charging weapons such as lances and spears are highly valued, and in ranged combat the sabiri self bows are considered beautiful works of art, crafted in secret rites from the long bones such as the ribs and femurs of the immense amasa bison.

Lances, though valuable to the horse warriors, are actually rather prized, due to the lack of useful timber in the land to generate poles of sufficient size to manufacture the weapon. Most lances come from expeditions to the Kossarit Mountains or northward toward Madalios, where certain tribes specialize in the manufacture and trade of lances made from the wood of more mountainous regions.

Short spears and javelins are also very popular, and javelin sports are a common entertainment in Sabiri tribes, even more so than ritualistic dueling. A good javelin thrower can make a reputation for himself. Some women are allowed to participate in certain tribes, but it is generally frowned upon.

Sabiri women excel instead in close-quarters combat. The Shumariin assassins are famous for their deadly knife fighting skills, and warrior sects of women have taken up the scimitar and turned to duo-wielding styles of combat that are terrifying to behold. These blade dancers are a breed of dervish known for integrating a deadly dance with swordplay, a technique that fears Sabiri men who believe the blade dancers to be witches that mesmerize them in to obedient death by blade.

Armor, in contrast to the preferred garb worn by most sabiri on a day-to-day basis, can get quite complicated and bulky. Most of the time Sabiri wear soft leather garb that offers some modest protection, but in regular skirmishes they prefer to wear lacquered armor and cuirbolli worked in to fitted plates. Such armor is impractical from day to day, but it is considered a necessary addition to the warrior’s repertoire in times of real conflict. The cuirbolli and lacquered plat armor is preferred for its light weight material and ease of use. Such armor is also relatively quick to assemble and wear. Keeping with fashion traditions, most such armor is dyed or painted blacks and dark reds, though color variations creep in from tribe to tribe. Most individual families paint their symbolic crest upon the armor, which is derived from the same sacred language used for tattoos.

Next: Sabiri Tattoos
Posted by Doctor Futurity at 6:00 AM