Tales of the Cannadad Dei: Culture of the Sabiri 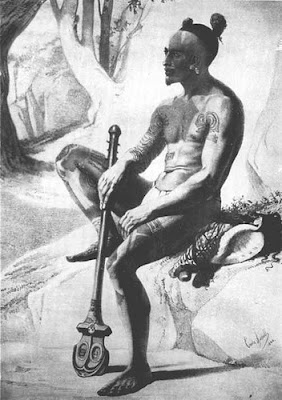 The Culture of the Sabiri I: Appearance and Horses


The Sabiri are really three distinct cultural groups: The Madalians of the north, the Sendenar of the coast and the Sabiri nomads of the mainland. There is a fourth group, rarely identified as such but still worth mentioning, in the form of the Eredites of the Jagged Coast. Details on the other subcultures of the Sabiri will be discussed in turn, but the overview of the nomadic culture shall be looked at here.

All Sabiri are known for their distinct, almost eerie skin tone. Best described as “chalk white,” Sabiri have a sin coloration that is variably whitish or grey, and foreigners who first meet a Sabiri often believe them to be ritually painted at first. The Sabiri accent their skin with sacred tattoos, usually favoring stark black lines over colors, which further accents the grey-white of their skin. Despite their unusual appearance, Sabiri are otherwise completely human.

Horses and the Sabiri

The Sabiri are a nomadic culture. They thrive on being in a state of perpetual motion, maintaining an unhealthy obsession on transience. To the Sabiri, the sedentary life is something one assumes when death has at last come to claim its due.

Horses are extremely important to the Sabiri, though unlike other nomadic cultures in Chirak (or even the local orcs) the Sabiri regard horses merely as equals, as beings of flesh and blood that you can tame and befriend. Most Sabiri treat their horses better than their own kin. A well-kept and trained horse will see you through many conflicts; relative, maybe not so much.

Every Sabiri learns to ride the horse at a young age, and is exceptionally proficient in the art of mounted combat by puberty. Women and men alike excel at this task, though the women are generally expected to take up more supportive roles after puberty and to rely on their horses for tasks more mundane than battle.

Horses in the Sabiri lands are strong, robust animals, some of the largest breeds in all of Chirak a Sabiri steed is noted for its black coat, though some spotted black and gray variants exist, as do pure gray horses. As many horses as Sabiri wander the land, perhaps more, for there is a healthy number of wild horses that roam the region as well. Some Sabiri men find it a challenge to capture and tame a wild horse, but others consider it folly; most Sabiri raise their mount from the time it is a foal, to develop a close rapport with their steed.

Because of this attachment, Sabiri characters should begin play with a horse, one which they have spent most of their puberty riding and learning to trust. Female Sabiri do not develop as close a bond to their horses, though they sometimes develop close bonds with multiple pack horses.

Selling a horse is considered a serious offense in Sabiri culture. A horse that has grown too old to be of much use is retired to the ranks of the pack horses and tended by the women. A horse which is too frail even for that duty is still cared for until death, or until they are forced to put it down.

Next: Dress and Garb