Tales of the Cannadad Dei: Warfare in Sabiri 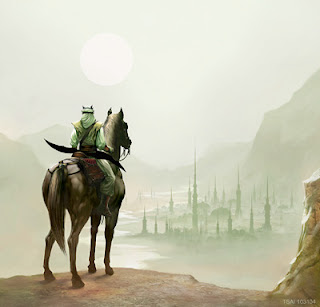 
Sabiri avoid warfare when it is not necessary, despite their proclivity for ritualistic violence and blood sports. Though there have been as yet no anthropological studies of the Sabiri by those few who are elsewhere inventing the field (among the Preservationists), such observations would see that the nomads are prone to using violence as a means of managing overpopulation. When a tribe begins to starve or finds its herds and water sources depleted, then violence is sure to break out. On rare occasion an especially charismatic warlord, such as the revered Zvhakkatas, will rise to power and can bring the chieftains together for a specific act of war, the vanquishing of enemies, or the seizing of territory. Rogue tribes, those which have forsaken the ways of Kobal entirely, are often also targeted by other tribes for extermination.

Most traditional disputes are settled through ritual warfare, blood sports and individual contests. The Sabiri do not practice arena or gladiatorial fighting, but they have no shame in making it a sporting event. When two tribes come to conflict, be it over land, bison, women or simple honor then they will meet on the field and seek to humiliate and defeat their opposition. Though the goal is not to slaughter the rival tribe, it can often lead to such consequences, for the hot blooded warriors may lose all sense of purpose and descend in to bloody battle. This is nothing unusual, and the Sabiri do not frown on a warrior who fails to control his blood lust.

As indicated in the history, warlords have on occasion risen to power among the many tribes. Such warlords are especially charismatic and usually driven by purpose.

There is one warlord who holds power at this moment out of Zen Hettar, claiming lordship over the northern sabirath (dominion). Despite Zamad-Ruus being a warlord, he is not seen as very powerful, and serves mainly as a figurehead to speak with the Espanean governors when needed. This makes some of the chieftains restless; the populations of the tribes grow large, and many sense that a new time of bloodshed is brewing.

Recently the Ghuzdar’Shadoan orcs have become increasingly bold, striking out against the nomads and seeking to claim their own space. It is believed that for unknown reasons their ranks have swollen and the orcs, much like the Sabiri, are feeling population pressure. It is only a matter of time before a new battle rages. The orcs, in turn, are being driven in to a frothy rage, for they claim that a new avatar to Shaligon walks the land, a orcish warrior-woman named Griska Swordthane. If these stories are true, then it does not bode well; years ago the last avatar of Shaligon was reportedly slain in a great battle between the Khasdrikana tribe of Sabiri and the Wyvernclaw orc clans, which were reportedly eradicated. The avatar and high priest of Shaligon was slain that night, and it was said that the restless spirit of Shaligon trod the land, one hundred feet tall, in furious anger at the failure of her followers.

If a new avatar has indeed arisen, it will give the orcs a new focal point through which to direct their rage. Many Sabiri hope this is the case. While they have no issue with taking arms up against one another, the Sabiri find true delight in the slaughter of their inhuman neighbors on the field of battle.

Next: Death among the Sabiri
Posted by Doctor Futurity at 6:00 AM