Tales of the Cannadad Dei: Dress and Garb of the Sabiri 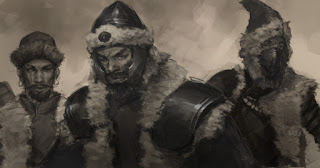 
The Sabiri dress with an economy of design; short vests, breeches and laced boots and moccasins are common, and garb is designed to be comfortable and not to chafe. The wilderlands of their domain are a warm region in the spring and summer months, followed by bitterly chill winters. The entire region is humid almost year round. This tends to promote garb that breathes freely, though tempered with garb which is functional.

Most Sabiri prefer the soft worked leather that comes from the local amasa bison which roam the region. This supple leather is naturally dark, due to the ebony pelts of the bison, and has the accidental side effect of looking rather ominous from an eastern viewpoint. Nonetheless, sales of amasa hides with the east is fairly brisk. The amasa are principally saved by the fact that the Sabiri rely on them and covet their herds. If the Espanean traders had their way, these beasts would have been driven to extinction by now, no doubt.

Espanean men tend to wear leather breeches and a harness for their tools and weapons. They sometimes wear a variant of chaps while diring, providing leather protection on their legs in combat; these same chaps are often worn at other times, designed for comfort first. In the winter they tend to wear heavier fur coats and hoods, stitched together by the women.

Many tribes enjoy unusual head dresses made of woven horse hair from the trimmed manes of their steeds. These head-dresses can get quite elaborate, and some of the men in the tribe will weave the horse hair with their own for unusual extended braids. Although the women fo the tribe (especially elders) are master weavers of the horse hair, the women themselves do not decorate themselves with the braided horse hair; it is another custom reserved for men. Women in Sabiri have instead adopted complicated lapidary designs for themselves.

Espanean women disdain long dresses and garb more common in the east except in the winter or as a sign of age. Elder matrons often settle with long fur skirts and coats, often worn year-round, and will wear decorative garb that stands out with evocative lapidary work. The younger women favor vests, light blouses, short skirts and breeches, sometimes with the utilitarian harnesses for equipment and weapons like the men do.

The Sabiri are a modest people, and it is considered taboo to appear overly “sexual” in Sabiri society. This manifests in the form of a disdain for eastern makeup and a preference for useful clothes over garb that accentuates the female form. Curiously, women who have adopted the warrior’s focus (the hnaka, below) tend also to eschew restrictive garb that doesn’t breathe well, so they are often dressed as lightly as the men save for their bustiere-like vests. Sabiri women dressed as warriors do not appear sexualized, however, despite showing off their extra skin, as they tend to emphasize their capabilities by additional tattoos and a plethora of visible armaments. This is how the women say, “do not touch, or you may die.” It works well.

Ritual dress is always more stylistic and designed for beauty and grace. Dance is a preferred social medium among tribes, and when two or more tribes come together they always throw a party. Ritual forms of dress are often quite elaborate; during such conflagrations the women of both tribes will exhibit atypical garb designed to show off the wealth of their immediate family and the tribe as a whole. Men will anoint themselves with artifacts of victory and war, and wear revealing garb to show off tattoos earned in battle. The most frightening members of a tribe are the ones who show no tattoos at all; the truly powerful shamans and sorcerers of the Sabiri prefer not to advertise their sacred tattoos at this time, lest they be compromised by an observant enemy.

Some Sabiri, especially around Fartheren and along the coast near Westgate among the Sendenar have taken to Espanean garb during these meets. It is at least partially due to acculturation from the foreign groups these Sabiri regularly interact with, and also due to the fact that the standard garb of the east is seen as so outwardly flamboyant that while it is scoffed at as a form of conventional wear, these Sabiri have accepted Espanean dress as suitable for gatherings and events.

Next: Arms and Armor of Sabiri
Posted by Doctor Futurity at 6:00 AM