There's a discussion of the seminars, events and games to be featured which will discuss the forthcoming edition at the D&D Experience later this month here. I am particularly interested in how they plan to unify all prior editions. My suspicion is that they plan to provide a set of rules that will allow for the thematic elements that people associate with prior editions while still being a distinct new set of mechanics all its own. The easiest way, I feel, to make D&D Next (or whatever its called) feel the most like D&D in the minds of its players is to not only haul those sacred cows back in from the field, but to treat them like bovine gods, fatten them up, and groom them heavily.

ENworld has discussion here, but I haven't seen it yet because their site is most likely overwhelmed with traffic on the issue (ENWorld sadly hasn't got a good threshold for high traffic volume on stuff like this).

RPG.net is freaking out over here. It's a lot more civil than I expected, and generally more optimistic than one might expect. It's fun reading the first ten or so pages of the thread, where wild speculation about how NY Times would never report on this unless it involved the sale of WotC is brought up regularly.

I'm sure there are other interesting spots, but I don't think we're going to have any newer or cooler details until after D&D Expo and WotC starts some official open playtesting.

I'm looking forward to this. I've been playing and enjoying 4E heavily since it was first released (along with several other editions of D&D), and I own every 4E book out there, but I'm no system war fanboy; they needed to do this, to get an edition out there that respected the totality of the fans and was not trying to jam square pages into round books and all that. 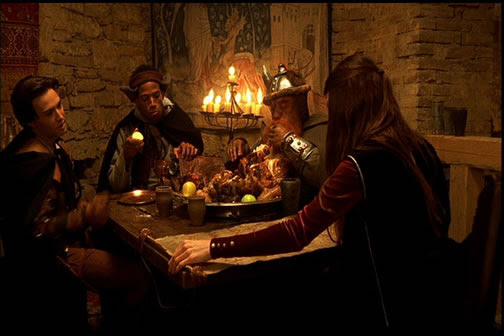 ADDENDUM: Morrus at ENWorld does indeed have a great scoop on this and even got to play a rought playtest game of 5th edition. Great reading here about it, and he confirms that the intended model is a core rulebook with a good set of basic rules, followed by a modular approach to all the add-on rules expansions you could want.

All in all, some very good news here. Time will tell, but I feel like WotC is finally taking D&D in a good direction again.
Posted by Doctor Futurity at 9:00 AM