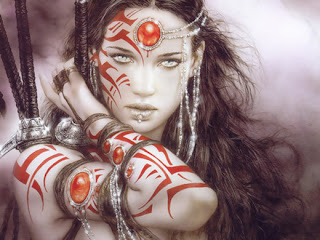 
Tattoos are vitally important to the Sabiri. The nomads long ago learned to imbue the inked and scarred marks with magical force, and in turn learned to attune their own bodies to these symbols etched on their own skin. Though Sabiri spell casters can and do employ written tomes, those warriors who dabble in magic prefer to use the spell tattoos, as they are easier to access in the fields of battle.

Despite the notoriety of spell tattoos, it is much more common for most members of a tribe to carry tattoos commemorating various deeds and actions, even if they do not contain magical power. A major victory (and sometimes a defeat) can be reflected within a tattoo. A marriage, alliance, a newfound brotherhood, or a symbol reflecting dedication to a specific cult or order is all celebratory with a new mark upon the flesh.

The process of making tattoos for the Sabiri who practice the art is complicated, and involves a sacred language of ideograms, in which each stroke or mark reflects a key proponent of the overall mark, but only in relation to how it is placed with the other symbols. It is a form of language, but not one that can be easily read without a trained eye.

Conventional marks are easily understood by most Sabiri; it is a special part of their greater language that they can understand. Tattoos imbued with magic are not so easy to grasp; the symbols used for magical language are a carefully guarded secret among the tattooist, and the tattoos themselves are said to reach deep in to the owner’s body, to tether to the soul, allowing the magic to flow freely between the symbol itself and its bearer.

Regardless of the nature and type of mage, most spells learned by that mage can and will ultimately end up as tattoos upon his or her body. Over time it becomes quite evident that the magic is a being of extreme power. These mages exhibit a strange sort of quintessence around others, which give away their nature as sorcerous beings. As such, these powerful tattoo mages will cover their own body from head to toe in obscuring garb, to avoid detection by simple visual observation of their many spell marks; thus the common saying among the Sabiri that “You know a warlock, for he the man who is always cold.”

Interestingly, because most older Sabiri women dress in heavy robes and dresses, the saying is a bit different. “You know a witch if you know a woman.” Sabiri are, indeed, a society divided by deep gender differences, and a male culture that has not a small amount of fear and superstition about the fairer sex.

Effect: The Sabiri have learned the unique art of inscribing ritual spells on their bodies. Through the use of this feat, along with 100 GPs worth of tools and a special ink which comes from the blood of an enchanted creature (usually a gorgon), the Sabiri artist can spend one day (12 hours) placing the inscription for any spell in question upon the body of a person. All features of the ritual spell must already be in place; the recipient of the tattoo must already have learned the ritual spell, for example.

Once it is placed upon the character’s skin, then he can never lose or forget the spell; he knows it innately by virtue of the arcane or divine script tattooed upon his body. Characters can have up to eight imbued ritual tattoo on each of the following areas: head, arms, legs, neck, chest and back. A Break Enchantment spell will remove a tattoo to make room for another one.

If the tattooed character dies, it is possible to take the spell from his flesh. The character must make a Knowledge (arcana) check at a DC of 20+the spell’s level to grasp the weave of the spell tattoo. It is also possible to imbue it on one’s owns kin through the process described above if the caster also has this feat. Otherwise, the skill check allows the caster to flay the skin and convert the region of the tattoo into a scroll.

Tattoo artists among the Sabiri often charge enormous sums to foreigners for the privilege of an integrated tattoo rune. The base price is usually 1,000 GPs, plus maybe some task.

Next: Life in the Sabiri Tribes
Posted by Doctor Futurity at 6:00 AM