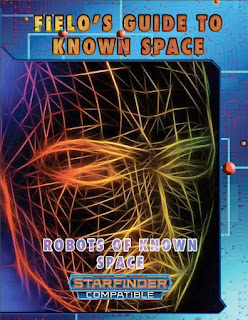 Produced by Nothing Ventured Games, this PDF is 18 pages containing nineteen robots across a CR 1-19 spread, from the lowly Observation Bot right on up to the terrifying CR 19 Hellreaver Automaton, forged literally in the bloody fires of hell to destroy all level 17-20 PCs in it's path. I'll be using this book quite a bit, as anyone who has picked up the Alien Archive from Paizo will notice that it is woefully short on meaningful robotic foes. The PDF is clean, follows the Starfinder stat block protocol, and has some nice black/white illustrations that get the job done. I look forward to seeing what the author, Paul Stefko, comes up with next for Starfinder. This appears to be the first Starfinder resource from Nothing Ventured Games, and hopefully they make more thematically utility-driven resources in the near future. 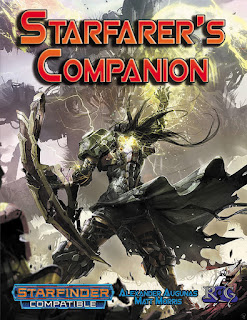 The Starfarer's Guide from Rogue Genius Games is a meaty 253 page compendium (in PDF and POD; I splurged for the print copy) of pretty much the entire rest of the kitchen sink that Starfinder did not include from Pathfinder. If you are looking at Starfinder and wondering how to de-retcon bards, the magus, wizards, paladins, rangers and clerics in to Starfinder, then this book has you covered. Missing any of twenty prior fantasy races (okay, give or take a couple unique aliens) missing from Starfinder? This book has you covered. Think Starfinder needs level 7 to 9 spells? Got it.

There's additional interesting content of wide use, too. New computer rules and equipment, feats, and some rules on companions and mounts with appropriate SF themes make for a rounded package. Seventeen new starships, built with the Rogue Genius Games setting in mind but perfectly useable in your own are also available, which will hold us over nicely until Paizo gets around to doing the Pact Worlds sourcebook with more starship designs in it.

Starfarer's Companion's greatest failing is the issue I griped about earlier: it's a trove of content, but most of it is reintroducing old Pathfinder material for use with Starfinder. This might be very useful to your campaign, but to me it feels like going backwards, not forwards. I want weird, new and most importantly unexpected strange science fantasy stuff; let the aasimar and tieflings rest on Golarion in peace. That said, you definitely get your money's worth with this tome if you need this content. You could probably even adapt some of it to a more conventional game by reskinning the racial options and classes, if you wanted. I can see definite utility in allowing a ranger type in some games, for example. For that matter, the bard class alone might be all you've desired if you ever wanted to play your own version of Ruby Rhod!