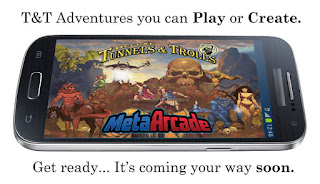 Tunnels & Trolls Adventures on Android is actually an app which lets you roll up characters and run them through classic T&T solo adventures, of which there are 17 currently available. So yeah, you can via this app roll up a warrior and take him on a challenging solo adventure, in which all the flipping to paragraphs, rolling of dice and messy note taking is handled for you.

It's kind of cool, actually! And very much like playing and actual T&T solo. But there are a few catches.

The first is price: you get two solos unlocked, including a decent introductory adventure "The Ascendant," and the legendary Naked Doom. As old T&T vets know, Naked Doom was something of a character grinder...it was rife with quick death. Some of the Android store reviews reflect the dissatisfaction with this (pansy noobs that they are). So far so good.

Once you are done with those two modules, the rest are unlocked for between 10 jewels (for mini solos like Circle of Ice and Grimtina's Guard), 40 jewels (for most normal sized solos such as Mistywood and Caravan to Tiern) and 50 jewels for Overkill. All told I determined that it would cost 450 jewels to get all of the solos currently available. The going rate right now is 10 jewels for .99 and 110 jewels for $9.99....so essentially it's $41 to get all the modules. Not horrible, I suppose, unless you maybe have all of them on PDF and have played more than a few to death....also there's some question of overall replayability; you can only play Naked Doom so many times, for example, before you've memorized the module more or less.

To contrast, other solos in the style of pic-a-path adventures available on Android range from the Sorcery! series at $4.99 for each entry to the many Fighting Fantasy adaptations which tend to be priced at $2.99. Arguably the T&T experience is a better deal....but it's really interesting that T&T is presented as a single app from which you then buy module installments. This does have the advantage of supporting your recurring cast of characters as you play through the game.

Interestingly, when your character dies the game doesn't delete it....but you do get a trophy hall which shows which characters actually did succeed at a module. Also, you can delete your character if you so desire, and roll again.

Things that perplex me so far:

First, you seem to be able to only roll warriors. I think this is because the app currently doesn't support magic options and the solo choices definitely reflect that. In order to get the full T&T experience this needs to be upgraded, soon.

Second, since when do humans roll twice because they're human? I guess this isn't a complaint....it's nice to know they have a slight edge, but that took me by surprise.

Third, the game so far seems to be liberally exploiting existing T&T art to accompany the text. I haven't ponied up for any of the premium modules yet so I don't know if there's more new art elsewhere, but I can say that it would be nice if they broadened the range. Especially since the full cost of this app to get all content is currently $41.

Finally, it is currently missing a number of solos, though I suspect that's because they haven't implemented a way to handle spell casting wizards and rogues, and some of those solos just aren't going to be fun without those classes.

Also of note is the ad at the top of this blog....notice it mentions "create?" So when do we get to see this feature? Color me very intrigued. If they implement a creator tool for solos, it will be a major step up from most of the other competition on the Android.

Beyond that, I'm really kind of happy to have this. It's a trip down memory lane for me (I haven't played any T&T solos in many years) and the app makes it incredibly easy to revisit T&T on the solo side. So....I wonder when we can expect a T&T Beyond for some tabletop fun?????