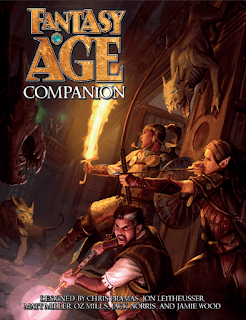 So I'm going to claim I was using reverse psychology, but truth is it looks like the Fantasy Age Companion really is on track for 2018. Yay!

I'm looking forward to this book and seeing what it has to offer. Consensus among my group has been that we should give Fantasy Age a try (again) soon, as the right combo of players and interest seems to be in the mix now.

Also of interest is the Modern Age book, due out some day (right)? and the Lazarus adaptation which I know nothing about other than it ties in to an Image comic (I think), as well as the planned supplement for Dragon Age, which remains intriguing because honestly I think that the tabletop RPG for Dragon Age is a better successor to the original computer game than every other CRPG sequel to be produced so far.
Posted by Doctor Futurity at 4:31 PM