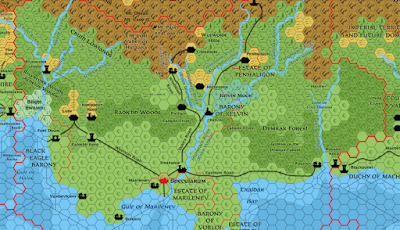 In thinking about the issue of time and RPGs...and how much time it can take to get the most out of your average contemporary game, I realized a few things:

1. I remain obsessed with the idea that my "golden age" of campaigning was when I focused on short 5 month-long 10-12 session campaigns in AD&D 2nd edition during my college years as the "gold standard" of enjoyment, but acknowledge that my ongoing campaigns I ran from roughly 1981-1989 prior to college were really like dozens of these 10-12 session games strung together into a coherent arc.

2. My current Call of Cthulhu game, which is running long-term and indefinitely, proves that the "long term campaign" model is not in and of itself the issue that bugs me.

3. While considering OSR games in this regard I realized that most OSR games, by virtue of their design and focus actually have "respect for your time" built in to their model of play. This happens by focusing on three elements of classic gaming that lend well to this approach: procedurally generated content (i.e. roll to see what happens tables), hexcrawl style exploration (move around a literal map exploring and looking for encounters/adventures), and resource management (you have limited resources that deplete, so you are incentivized to explore and replenish those resources).

Point 3 is the one that got me to thinking about this idea: current RPGs that respect your time as a player and/or GM, and provide you with the tools to enjoy a game for one night --or twenty-- and never feel like the burden of playing or running the game demands too much of you. There are actually several games on the market that fit this bill exactly.

In the interest of promoting games which really do respect your time and provide you with a framework designed with the general experience of enjoyment and a greater "return on fun" in mind, I would propose that the following five games are excellent examples of this:

Stars Without Number shows up first here because I've been reading so much of it lately. It's designed with simple character generation that nonetheless allows for a wide range of interesting options to "flavor" your PCs and make them feel different. For the GM it provides a working toolbox with lots of premade content, but also provides a solid structure for quickly designing worlds, encounters and plots on the fly. Once you've used the World Tags option, for example, you will never want to play a game that doesn't offer this. Or, you know, just use SWN's system for all your gaming needs, regardless of the game you play!

The simple fact is, no one has beaten classic 1981's Basic and Expert D&D on ease of use and applicability. Just in the Basic set alone you can run any dungeon with minimal effort, and you have all you need for delving into D&D's worlds without any fuss or muss. Expert D&D adds wilderness exploration, sailing, and some measure of politics. There's simply nothing you can't do for at least 14 levels of play with these rules that requires overt levels of prep. The mechanical structure of B/X is it's only failing....if you don't like racial classes, that is. Otherwise it's perfect. Hell...for most people hexcrawling was essentially invented by this edition of D&D (it wasn't but for most --like me--this was the first actual exposure to the concept!)

It makes sense to include this because Beyond the Wall starts with the core conceits of OD&D and Basic/Expert D&D, reimagines the magic system, then, builds the entire game around the concept of the playbook, in which you get to roll a lifepath history for your character while (and this is key) the GM uses a similar playbook to create the scenario you are about to explore. It's simple genius and hard to not want to see this style of game available in every genre once you've been exposed to it. You can literally run Beyond the Wall with all prep starting at the table at the same time as character generation.

Okay, Traveller may not be technically OSR in one sense, but the current iteration of the game from Mongoose is actually still adhering to the principles that made Classic Traveller just as accessible and fun....just with more stuff to play with. Traveller, like Stars Without Number, provides procedural rules for generating worlds and systems on the fly, rolling quick patron encounters and generally offering procedural adventures that demand only that the referee make some effort at improv. Personally I like spending lots of time engaging in the "subsector generator" minigame myself so I often prep lots of stuff in advance, but it can be a very interesting experience to just sit down and run Traveller cold. You'll learn a lot about how to think on the fly using the tables in the game as the springpoint.


5. All of the White Box Family of Games

I am cheating here, because by "White Box Family" I am including the actual Swords & Wizardry White Box, the "White Box" version of the same, White Star (for SF), and the many, many other iterations that are inspired by OD&D (Warriors of the Red Planet, for example). Each of these games is built on a minimalist rules system which also encourages procedurally generated sandboxk style gaming content. Each offers enough in the way of setting background, encounter data, and rules on how to work the pieces for even average GMs to pick up and play without much effort. Pretty much any game which provides the proper tools for sandbox gaming can do this....and all White Box/OD&D variants excel at this approach. 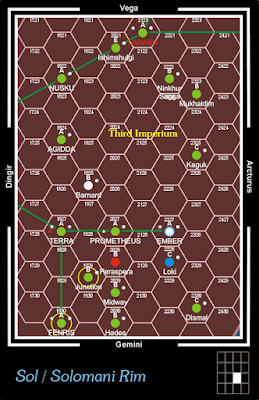 D&D 5th edition tries hard to provide the tools to do what these games, above, all do very well. And it works! 5E, when you dig in the DMG, has a lot of useful content for running procedural or hexcrawl style gaming. Now that said, there are things in D&D 5E that may or may not capture the magic of what it is like to run a sandbox old school adventure. I think that the overall experience is simply not as sharp as it could be (but it is damned close) if only because some of the core conceits of all of the above systems (which all involve careful management of depleting resources) is not as prevalent in D&D, which puts too many safety stops on those same resources. The net result is one in which D&D 5E often feels like it hits those marks, while accidentally defeating some of the more interesting elements of the resource management game that makes the old school method so fun. But despite that....it still deserves honorable mention as the first iteration of official D&D in 18 years to try and get back to that feel again.
Posted by Doctor Futurity at 6:00 AM