Stars Without Number Revised Edition surprised us all at the very end of 2017 with a release, and I finally snagged the deluxe copy with a print version on the way. If you've ever wondered what a SWN character might look like, or are curious to get a sense of any changes in this version (there are a few of note), here's a sample character I rolled up. I actually devised a level 1 version, but subsequently bumped him to level 6 just to see what that looked like.

Characters all have a series of random stats (there's also an assignment you can distribute if you want), a background which determines base skills, the class, foci which function like variable "non class" traits that flesh out who your character is, and psionic rules if that's a thing you're going for. Optional rules in the back expand character options in to transhumanism, magic/fantasy (Starfinder, cough) and more. Core rules cover cybernetics and alien options, too. 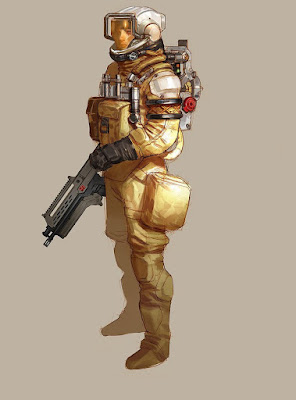 This character is basically a level 1 PC elevated to the status of a level 6 PC, but I didn't bother to modify equipment or anything to reflect that. Soldiers in SWN are pretty efficient. He has his slightly above average HP for a soldier (they get a +2 bonus per level as a class feature), and as a soldier with his combat rifle he can dish out 1D12+3 damage thanks to being able to add his Shooting skill to level (thanks Gunslinger Focus!) He needs a vacc suit to survive harsh environments, but his Ironhide focus effectively means he has some sort of nanoweave armor laced into his own skin...he's shirtless with an AC of 18 and it will continue to grow over time.

The die mechanic for basic resolution in SWN is to roll 2D6, add skill level and attribute level (if any) and beat a target number of 8, or higher for excessively difficult tasks. This is essentially the same mechanic as Traveller, but with some simpler approaches.  Skills in the new edition of SWN got a bit of a revision, and the rules later discuss ways you can reintroduce the old skill system, or adapt to this one. Skills in SWN for those new to the system are fairly simple...there's one page on the available skills, of which there are 19 base skills and 6 psionic skills.

Rolling a SWN character once you're used to it takes minutes. Maybe 10-15 minutes, tops, if you're thinking hard about your choices. There is also a "quick and dirty" generation method that must be even faster if it's the quick method!

I'll be writing more about this book as the days roll along. It may be my cure for how to break the bizarre spell Starfinder has held over me, at last.

Email ThisBlogThis!Share to TwitterShare to FacebookShare to Pinterest
Labels: stars without number