Starfinder Campaign Ideas Take 3: Exploring the Conarium Expanse (An expansion on the universe of Enzada)

As I continue to toy around with Starfinder I have worked out one more "starting point" for a setting. This one specifically does not require reinventing anything currently in the game, presumes that somewhere in the galaxy are the Pact Worlds, and keeps everything suitably ambiguous....there's not a lot of assumptions about this universe at this point outside of the basic outline below. 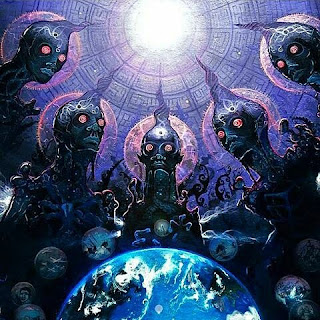 Premise: Current year is 8,850 years since the dawn of the era of spacetravel, roughly, but usually called the year 3,200 of the Old Karthan Empire. The Old Karthan Empire could be considered a region of space in the unexplored frontier far from the Pact Worlds (so typically base travel to this region is at least 5D6 days).

The Conarium Expanse is a region of space in the Frontier of the Galactic Rim (the Vast in Pact Worlds terms). Its dominant human controlled system is the Enkannu system, which was the first colonized world in this expanse.

The Conarium Expanse was first found by human scouts and settlers approximately 1,100 years ago, but little headway was made due to the dangerous nature of local uncharted space and hostile local species. Enkannu is the heart of the human center of trade and commerce, providing a support network to roughly one hundred colonies, but the expanse has over three thousand unexplored or contested worlds.

Rumor is that those who dwell too long in the Conarium Expanse develop a form of enlightenment, a “third eye,” followed by a revelation of madness. This is where the name comes from. In truth, few regard this as a risk, but claim that the closer you get to the center of the expanse, dominated by a dense cluster of suns claimed by the Dominion, the likelier you are to “go strange” while traveling in the Drift.

Long cut off from the rest of humanity save for some treacherous trade routes, few have adopted the old ways of worship. Other gods rose to prominent belief in the Conarium Expanse, and include Pegara, the old goddess of luck who was worshipped by the first explorers in the region. There is also Samathros, the god of well being, Tythor who is the god of conflict and Deremondre, the goddess of technomagic. Kayhindrel, an obscure nonhuman deity of travelers has long been adopted in this region as well. Golgothra, the Ysoki deity of wealth and abundance, is also incidentally popular among those seeking wealth.

Stories exist of even older, darker alien gods. There are five old Star Gods as well that are said to exist in the void beyond the Outer Rim, but are believed to have long ago destroyed the forgotten cradle of human civilization once called Enzada.

The Old Karthan Empire and the Orion Expanse

The Drift, the mechanism of star travel is considered semi-divine, and the nature of technomancy and the solarians is a given. The origins of these powers is lost to time, but many religions and strange beliefs have risen on dozens of worlds as a result. The most noteworthy is the Church of the Techno Union, which is the official religion of the Old Karthan Empire. The Techno Union espouses the belief in the First Sun, which they consider a monotheistic deity of creation, and believe the source of all magic and power in the universe.

The Old Karthan Empire is called such because after the sundering by the Vesk, dozens of smaller regional powers grew up in single worlds, systems and clusters. Only the Conarium Expanse lacks any true central authority, due primarily to the threat of the Outer Rim races such as the Drow and the elder beings called the Deh Nohlo of the Dominion. The existence of the Nether is also strong in this region, with light-year long nebulae bleeding the abyssal nether into realspace from the Drift. Periodically an empowered noble of the Karthan Empire seeks to gain power and prestige by finding a new, safer passage to the Outer Rim and to then conquer the colonials in the region.

One such noble, Duke Kalas Atrophion has recently established a beachhead on Sorovas, the closest world in the Karapath Expanse edgeward along the Conarium Expanse. There he is now exploring the uncontrolled region to seek control, even as his private army conquers the local planets of the Karapath Expanse in the name of the empire. His eyes are set on Conarium Expanse though, and it is believed that he thinks there is hidden power there kept by the Dominion which he seeks for himself.

Some core conceits of this setting:

1. "standard" or classic fantasy race options exist, but are not really indigenous to any region discussed (Old Karthan Empire or Conarium Expanse). So they can be viable PCs but I won't have to worry about imagining ancient galactic star empires of elves, which seems to be the trigger for my anachronistic meltdowns. In fact in this universe I kind of like the idea that elves may only come from the Pact Worlds, or be a relic race that doesn't take well to technology and space so are exceedingly rare as a result. Only drow seem to thrive.

2. The Conarium Expanse is the "frontier of the frontier" and seems like a good way to put the PCs in a SF/fantasy setting with lots of potential for limited tech resources and difficulty escaping to safe planets in a pinch.

3. I'm fully embracing the idea that there are ancient star gods. I am implying this is the same galaxy that Enzada exists in, which is fine with me because A: Enzada was built from ground up to be a Pathfinder campaign originally, and B: the underyling plots of that fantasy setting strongly imply that it's been meddled with by ancient aliens, star gods and a supreme AI who is responsible for the creation of most deities. It allows for possible cross-over with a campaign setting that embraced the underlying fantasy/sci fi principles behind Pathfinder and now Starfinder, so requires no shoe-horning.

4. Why are Deh Nohlo fully statted out in Starfinder but Neh-Thagglu are only referenced? I love the brain collectors and need to convert them ASAP!

Anyway, I'm planning the next game for Starfinder to happen soon. I am also starting a "family night" of gaming using Starfinder. It will help my wife and I teach our son how to game in a tight group with the infinite patience of parents...heh....